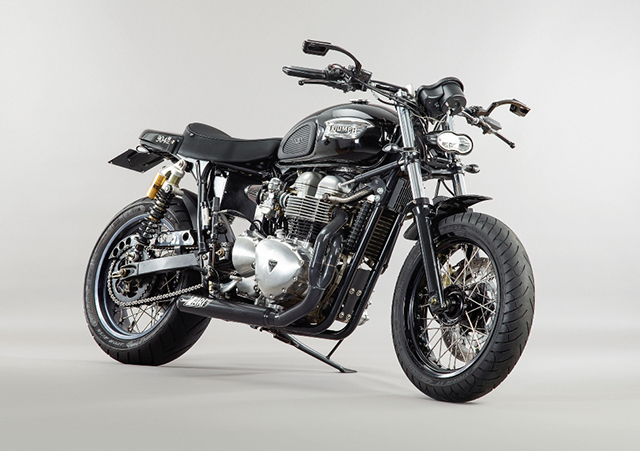 The nickname ‘flying Scotsman’ comes to mind when describing Lindsay Young and his previous builds. Over the years, this Scottish Mechanical Engineer has built some super fast sports bikes. This time, he decided to build something a little more “sedate”. Not to say that this Bonneville Streedrod isn’t packed full of performance features – just not in the same league of break neck speed. So when Lindsay’s good friend was selling his stock 2003 Bonnie with only 3000 miles on the clock, Lindsay decided to try his hand at building his first classic styled ground up custom. “I did initially think of some sort of café racer but there are so many of them around and it’s all been done before many times over.” says Lindsay. “I wanted to do something a bit different and unique so my thoughts turned towards a retro style minimalist streetrod/streetfighter.” And so, the Streetrod was born – well, he still needed to do the work. Having built bikes his whole life, Lindsay knew having a clear direction before he started would save time and money in the long run. He wanted a clean minimalist look so everything that wasn’t needed was stripped off the bike. To get the most out of the stock 790cc parallel-twin, the engine was bored out from 790cc to 904cc, gas flowed cylinder head and skimmed 30 grams off the flywheels. The standard air box and secondary air re-injection system was removed and a Dynojet Stage 1 kit and K&N individual air filters were added. The exhaust is a Zard 2 into 1 with removable baffle and black ceramic finish. On the handling side of things, Lindsay chose fully adjustable Ohlins gas shocks, Hagon progressive fork springs with 20 weight oil. He also added TEC billet fork brace and steering damper. For braking, he get serious with a 4 pot Brembo brake kit with a 335mm Floating Disc. One of the most time consuming element to the build was the custom wheels. He decided to change the front 2.5″ rim to a 3.5″ and on the rear he upgraded from 3.5″ rim to a 5″ using Talon Hubs and Morad Rims. After two suppliers and five months in wasted time, he finally had the wheels and the look he was after. Then there was the rewiring nightmare which Lindsay had a crack at doing himself but in the end “looked like a dog’s breakfast” so he decided to enlist the pro’s at TWS . “The rewiring was caused by just about every electrical component being moved to create the minimalist look I was after” he says. It turned out to be the best money he spent. When it came to the styling, Lindsay only wanted quality components. Using Italian made Rizoma mirrors, grips and LED indicators. The stock bars were replaced with 36” Fehling flat bars and the Bonnie headlight was lost in favour of a Highway Hawk dual oval headlight. The classic single seat came from a Triumph Scrambler. On the back is a Rosscromo hugger and the front is a modified mudguard all in black. We think Lindsay has achieved exactly what he set out to do; creating a minimalist streetrod Bonneville with top quality components, matched with real performance and handling. He tells us the bike now has 50% more power than stock and “the brakes are phenomenal”. Now excuse me, I have to go upgrade a few things on my Bonnie.