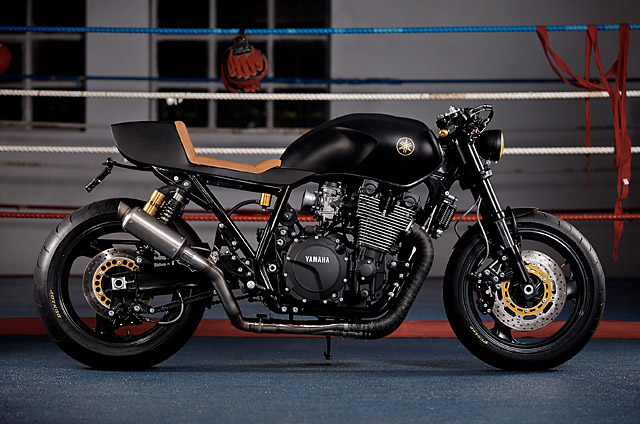 It’s a fantasy that every road bike owner must have had at some time in their lives. ‘What if I could build a bike that was invisible to radar?’ The thought of those charming boys in ‘law enforcement’ totally unable to get a reading on you as you glide through your favourite set of corners. And not at a speed calculated to be ‘safe’ for everyone from the tanker truck full of petrol to the little old lady with failing eyesight, but instead at speed that perfectly suits your skills, the bike’s performance and the conditions of the day. It’s what the afterlife must be like. The afterlife and whatever inspired the owner of this beautiful Yamaha to brief her builders, Portugal’s It roCkS!bikes, to turn his stock XJR into the two-wheeled equivalent of a Stealth Fighter you see here. The guys were generous enough to provide us with a little interview. We hope you like it.

Who are you guys?

“Our names are Osvaldo Coutinho and Alexandre Santos and we own the brand “it roCkS!bikes”. We are from Oporto, Portugal; we are both Engineers and addicted to motorcycles.” Why did you build this bike?

“This was a commissioned bike for a friend of ours. At first, he just wanted a new tail, seat and to fit some parts like up-side-down forks, Brembo calipers and the Motogadget Motoscope, but we told him that if we put our hands on his bike, it’d have to be all or nothing… and so it was!” What year and model is the donor? What was your brief ?

“We heard the ideas that the owner had for his bike, like the rear end and the name “Stealth”, because he is somehow related to the real stealth airplanes. So, starting from there we just got to work to finish the bike just in time to show in Lisboa Art&Moto show last April.” What did you do to the bike?

“All the parts of the bike were disassembled and from the original bike we kept the gas tank, engine, part of the frame, swing arm, rear shocks, wheels and brakes. In the front, we fitted a Kawasaki ZXR up-side-down fork and Brembo brake calipers. To fit it all together we had to fabricate aluminium CNC 3D adapters for the calipers and axles for the wheels and steering column. On the rear, we refurbish the original Ohlins double shocks and replaced the original tires with a set of Dunlop Sportmax, in stock sizes.

The engine, which was in fairly good condition, was painted in matte black and all the bolts were replaced. The original air box was removed and we designed our own set of velocity stacks with filter, custom built by us especially for this project. To protect the air filters from direct water and dust, we also fabricated a fender for the rear wheel. The exhaust is a 4-2-1 titanium piece, with thermal wraps on the headers. Since the air flow was improved, the carbs were re-jetted and properly tuned. The oil cooler is a very small, high performance part fitted with new oil lines.

The lithium battery was moved to the rear end of the bike. We also fitted a digital dashboard from Motogadget. This unit was mounted in an aluminium bracket, also designed by us and CNC’d.

Since we had to keep the stock gas tank in this bike, we fabricated the seat and the metal rear section with a shape that follows the tank’s lines. The front and rear fender are custom fabricated aluminium parts and the seat is an exclusive handmade light brown leather piece.

All the paint was spray on and then covered with a thin layer of matte varnish. On the front we fitted a small headlight and matched the colour of the rest of the bike. Also the mount was also custom-made.” What do you think of how it turned out?

“It turned out just like we wished, so we wouldn´t change a thing in this bike!”

How does she ride?

“Since we reduced the massive weight of the original XJR, the bike feels very light and the tuned engine’s power really stands out… it just pulls hard at any speed The steering geometry is now much more radical, so the bike really encourages you to ride hard on twisty roads and have fun in the corners.”