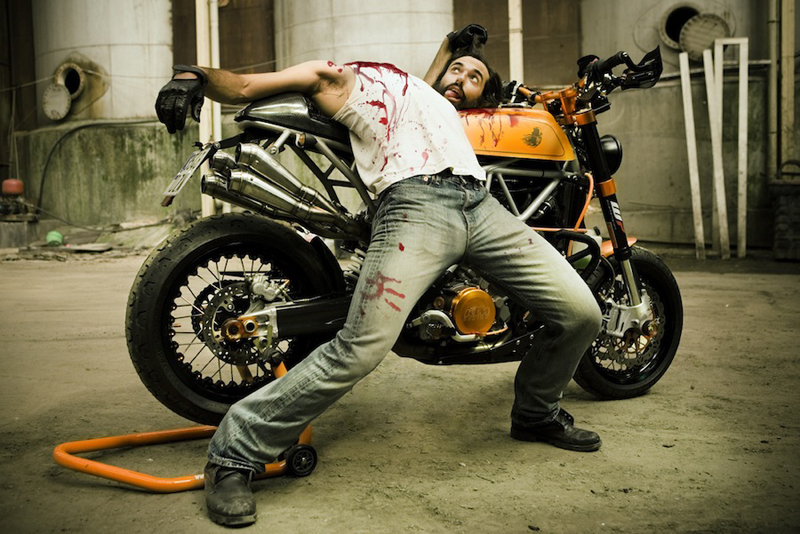 Hilarious – now step aside so we can see the damn bike

Ever got your hands on a bike that is so captivating, so enthralling, so stupidly fast that she somehow takes control of your senses and transforms you from a law-abiding citizen into a law breaking, twist it to the stop, foaming at the mouth and giggling into your helmet lunatic? Fun, huh? And you’re not the only one who thinks so. See, this is the story about another mild-mannered man like yourself, named Osiyuyu, who is a Fine Arts University Scholar and a “recognised antique art restorer.” He too has a penchant for creating scary motorcycles – and a little bit of woman chasing on the side. Meet the latest creation to crystalise out of his deranged brain… a KTM 950 called “Miss Hyde.” She started life as a tough little 2006 carbureted KTM 950 SM which has been nipped and tucked, tuned and tortured into the beautiful beast before you. Osiyuyu isn’t a professional bike builder but he wanted to have complete control over the rebirth of this KTM. So Osiyuyu found the right team of plastic surgeons, metal medics and painting practitioners to make his dream a reality. It took them a year to complete Miss Hyde’s makeover and she has finally checked out of the custom clinic. Some of the fabrication work that Miss Hyde underwent was done by local shop owner Raul Inox. He fabricated the subframe, relocated the battery under fuel tank and chopped the front fender. The handlebars are manufactured by Neken for KTM Racing with EMIG Racing Triple Trees. The tank insignia on the cut up Honda CB750F tank was carried out by steady hand Raulowsky and the painting was commissioned to Lana’s Paintshop. The uncomfortable looking cafe racer cowl is a reinforced carbon-fibreglass plastic Vespa 50 seat. Lastly, all the mechanical and electrical work was carried out by Tino Mallo. Unlike the tale of Dr Jekyll and Mr Hyde, this story ends with a happy ending. After a little bit of surgery, Osiyuyu got the girl of his dreams. They now live happily ever after, spending a lot of time roaming the streets of Spain. She gets a lot of looks from other men, and she doesn’t always treat him kindly but we think that’s the way this well mannered scholar likes it. Unable to afford insurance, Osiyuyu resorted to voodoo to protect his bike Intake: SAS and EFC systems were scrapped for improved performance as well as the Motohooligan airbox and Cayenne filter for a new total output of 110+ HP. Photography by the talented Kristina Fender.