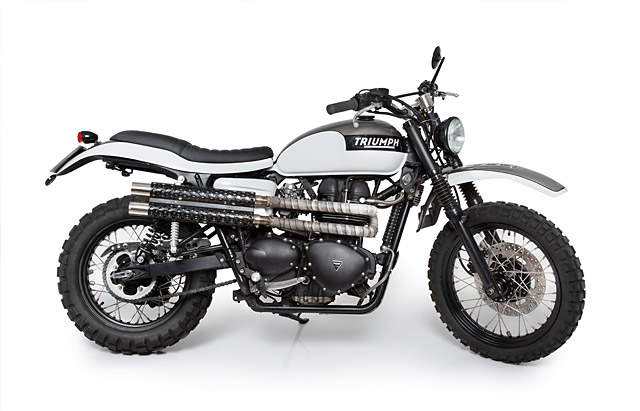 After many years selling custom Triumph parts and building bikes under the name 8Negro, the Spanish workshop have decided to rebrand and start trading under the new name Tamarit Motorcycles. With a new name and a new found enthusiasm, the guys chose a 2006 ‘carbie’ Bonneville as a donor for this scrambler project. From it’s initial inception during a round of beers, it has become the showcase bike to show the capabilities of the Spanish workshop – especially their in house fabrication and new parts range. We are glad to present the latest from Tamarit Motorcycles, a Triumph Bonnie scrambler they call ‘Pegaso’. After a run of five customers bikes, all built to different specs, it was decided that a bike was needed that could show the skills of the Tamarit crew. A 2006 Trumpy was chosen for the build, with the idea to build it as “a true scrambler”. Once the build brief was decided upon, the bike was stripped back and the work began for the parts required to customise it. A mix of both inhouse manufactured and outsourced parts make for a neat late model Triumph scrambler, which makes a change from the factory Scrambler model. According to Tamarit, the majority of the build was taken up by engineering their own componentry, making adequate molds & casts in order to be able to produce the parts en masse. Once their own touches were manufactured, the build didn’t take long at all, it was simply a matter of assembling everything they had gathered together, or made. The factory seat and rear guard has been replaced with a unit of Tamarit’s own making, the lines flowing like an old school scrambler bike. Standing proud below that is the Papillon style exhaust, designed for this bike but now part of the Tamarit parts catalogue. Other in house produced componentry include the chain guard, bash plate and foot pegs. At the front end sits a set of Renthal bars, with the factory grips being replaced. Perched below this is a 3/4 headlight, and gaiters fitted to give the front forks a better chance off road. A smaller speedometer and turn signals replace the factory units, the final touch being a swap to more capable offroad rubber. From an idea over beers, to the launch of a showcase machine for their custom parts business, Tamarita have produced something different from an old favourite. The best way to describe the journey is said best by Tamarita themselves: ‘At that moment we decided to make our own parts, by hand and trying to make them so “beautiful that convey something special as if they had soul “. Amen to that.