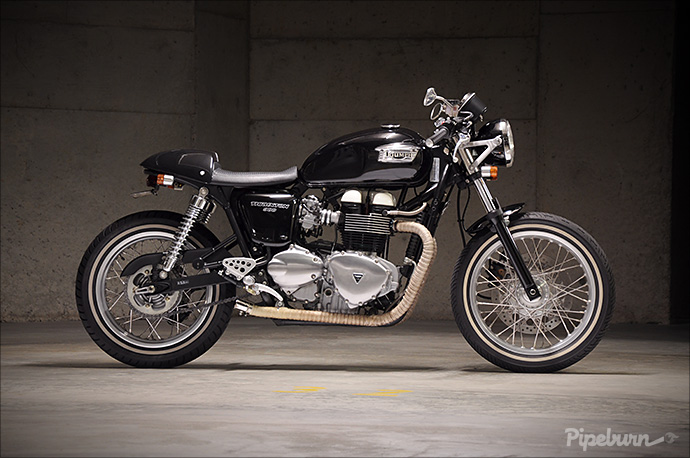 Thruxton. As in the English race track. Just so you know.

Thruxtons. They’ve always troubled me. Not in a waking up in the middle of the night screaming “THRUXTONS! NOOOO!” kind of a way, but more in the “factory trying to make a cafe racer when in fact the very essence of cafe racers is that you have to do it yourself” kind of way. That’s not to say I don’t like them, quite the opposite in fact. They look the shiz. But I was always a little confused as to how you would customise them if they had already been customised at the factory. Not any more.

Darren Leigh Roberts. Father of three (one girl and two boys), I run my own business as a photographer (dlrphoto.com.au). I live in Sydney in Oyster Bay – 10 minutes from the Royal National Park and the gateway to the beautiful South Coast; great roads and the best beaches on the eastern seaboard. Tell us a little bit about her.

I have always had bikes over the years like a Honda minibike from a merry-go-round (it’s true), my old man fixed it up and it was my local ride for many years after school. When my first boy was born I went out a bought a new Triumph Thruxton 2006 carby model straight off the shelf – I hope to keep it so he can have it one day and say its his dad’s bike. It sounds crazy but I remember the cool things my dad had over the years and wish he still had them now, just cool boy’s stuff. Exhausts have no mufflers. Volume isn’t insane when the revs are kept low

The modifications started after a crash a year or so into owning it. I was in traffic with a few cars ahead and one decided to suddenly turn into a driveway causing three cars ahead of me to brake violently, thus I had no where to go and braked too hard sliding the front wheel, and saw myself upside down in the next lane with my helmet scraping the road while watching my pride and joy siding towards the cars. Luckily she stopped without hitting anything. I started ordering the replacement parts to fix her and that’s when I started the modifications.

I definitely felt like I have learnt more about the bike since the crash, coming off your bike I really think helps you become a better rider. I rode her for over a year without a seat with an old black rag over the battery so I didn’t fry my balls! I’m (6″3) and riding closer to the engine lowering my body to hug the bike just felt better for me. My inspiration is a mixed bag, I love classic black & white look, and I love the bobber hot rod look and also the Rat bike roughness. This made me change and think a lot about the modifications. I honestly don’t see myself as a bike builder (I wish I was that talented, and I wish I had the time too) I just made a few changes to my Thrux…

The idea was a chopped Thruxton. I wanted to create a custom bike that you would look at and say hey that’s a Triumph Thruxton BUT… something is different – it’s not standard. The best thing about the bike is that it handles and goes like a Triumph 900 Thruxton. You can ride it like a classic with that beautiful Triumph note or pull the throttle hard and make her scream like a hotrod and with no mufflers, she does! Has she been in any shows?

I haven’t felt like she’s ready for a show – maybe one day. I’m not too good at saying “yes, it’s finished,” that would be too boring. It’s not about the finish line; I’m just happy to ride it. Wrap it up, I’ll take it

What other bikes do you own?

My latest project was another baby boy, now a year old, so a Harley Davidson XR1200 is the next bike in the garage ready for a little custom fit out. The idea is to make it a little more flat track looking. Can you run us through the mods to date?

I’ve added a white wall 10mm feature on the front and rear tyres thanks to redvan.com.au. Custom made clean simple tips for the standard header pipes and removed the mufflers totally. White heat wrapped the header pipes. Cam covers painted ivory white to match the other white areas of the bike and to help highlight the white in Triumph tank badge. Blacked out the rear of the headlight for an older classic look. Smaller mirrors. Shortened front guard and completely removed the rear guard. Custom-made single seat with re-stitched Triumph logo on rear of seat (under cowl) – seat’s only 10mm thick, but still very comfortable. Custom cowl was shortened and flattened. Styled to look the same as original although a lot smaller – special thanks to www.prostich.com.au for helping me with my crazy vision. Bullet indicators. K&N filters, air eliminator plugs.

Anything left to do?

I’d like to black out the rear springs, cut out the side covers to expose the air filters, remove the muffler brackets at the rear of the bike, widen the rear tyre or change the profile of the tyres to an older, more classic look but without compromising the bike’s handling or performance. My ultimate bike is anything in my garage.

If it was a movie, which one would it be?

I don’t get to watch a lot of movies but it would be part of a dark city street scene… I can’t think of a movie, but I can see it in my dreams!