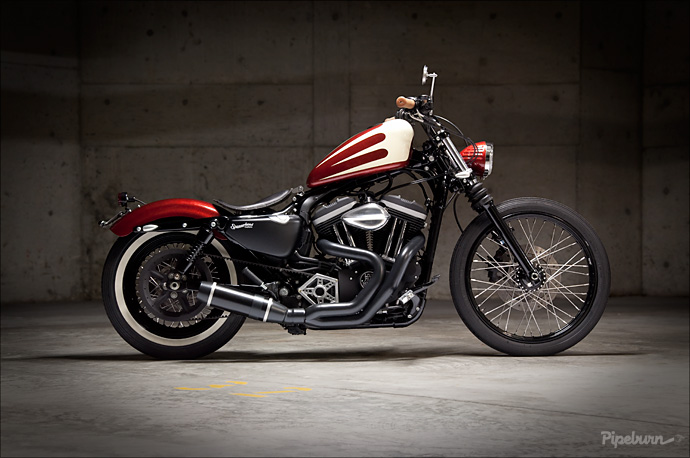 More fun in the garage; if only I could keep them after I shoot them (click for a larger version)

Ever asked someone about Harleys? I have and I’ve decided that there’s really only three responses that matter. Firstly, and most obviously, you’ll get a flat out “don’t like ’em”. Fair enough. Then there’s the response that a Johnny-come-lately hipster like my good self will give; a long rambling monologue about nothing in particular that you’ll be lucky to stay awake through. Put simply, I like a select few. Then there’s the response that the owner of this bike gave me. No words, he just rolled up his sleeve and showed me an old Harley tattoo. Enough said, I reckon…

My name’s Thom Davy. I’m a 34 year old Graphic Designer, originally from England. I’ve been living in Australia for the last 7 years. Been pulled numerous times by the police for my noisy pipes and i’m not talking about my insides.

Nice. Can you take us through the build of the bike?

It’s a 2010 Iron. I originally bought it because of the matt black stealth looks and the reliability of a brand new engine but overall the affordable price tag. I decided I wanted to strip it back and try to make the bike look more classic and over time I sourced bits and pieces from ebay etc. and gradually my spare room filled with parts… spoked rims, tires, headlight, tail light, new seat, shocks, speedo relocation, forward controls, bars, risers, indicators, tank lift, coil relocation, air filter, pipes, sprocket cover, points cover, pedals, grips, mirror and a few more odds and sods.

I had all the parts but needed help in making it happen, luck would have it I bumped into a top bloke called Kendall Madigan who lived literally at the end of my street and who knows his shxt, been building bikes for years and we came to a deal he’d help me fix my bike up in exchange for a logo for his bike building biz (if anyone wants to customize their bike without the hefty price tag give him a shout). So he had himself a deal. I would like to wrap the pipes, but we had such a bitch getting them on we don’t really want to take them off for a while. I’ve asked my bro who works at Crumpler to make me a new version of a blanket roll bag which will be handy. Did you sketch, Photoshop, or just go with the flow while building? Did you draw any inspiration from other bikes?

Mainly when it came down to choosing the colour and tank design I made a couple of 10 minute photoshop mock ups, but really just had it all in my head. I changed my mind so many times it was stupid only to come back to my original idea of the scallops which I then gave to Marc over at Sydney Custom. I think he did a great job and unfortunaly you can’t really see the flake in the paint in the pictures; it’s best viewed in daylight – looks awesome.

Yeah I entered the bike just as something to do. Think the idea was to build the best for less, not sure I fitted into that category. Would have been a great day out apart from the fact that I got a flat so spent most of the day pumping it up in ball-sweating heat to then end up getting towed away from Deus and then to top it off I lost my house keys… all that for a free T-shirt. (I’m starting to run out of bike pump jokes. Any suggestions would be greatly appreciated – Andrew) The suspension is way better and the risers don’t break my neck anymore, but now the seat breaks my ass and the tires are as scary as hell in the rain.

Any words of wisdom from the build you’d like to pass on?

Ebay takes over your life, but it’s worth it. If money was no object, what woud be your ultimate Harley?

An old Shovelhead, Panhead or something old with truck-loads of character.

What bikes have you owned before, and what bike would you like to own next?

I’ve owned Scramblers, and vintage Vespas. I think my wife would chop my nuts off if I bought another bike. If however she wasn’t to know then it would have to be as above…

If the bike had a theme song, what would it be? Probably the best angle to show off the “high up front, low at the back” stance of the bike PS. Are you in Sydney? Do you have a bike that you think tops this? Why not contact us and see if we can’t get it shot in the Pipeburn Garage of Photographic Super Excellence? Go on, then…