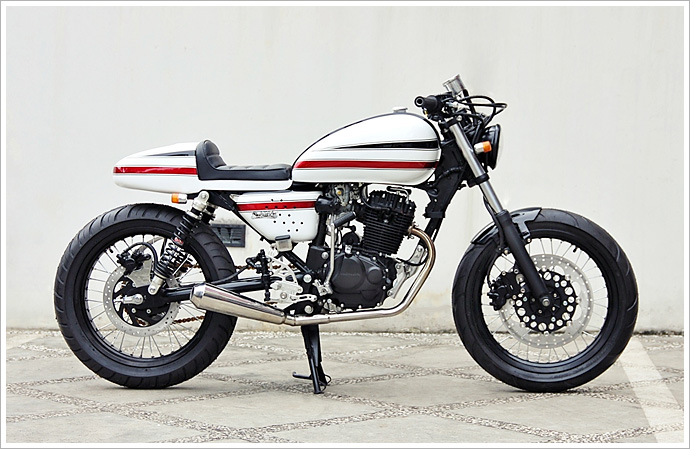 While most of us would choose a donor bike for a custom project based on whatever cool whim may be currently tickling our fancy, it’s important to remember that many bike lovers the world over aren’t able to get their hands on a well loved CB Honda, Yamaha SR, or antique BMW boxer at the drop of a hat. With the notable exception of Japan, the Asian bike market has long been turf owned by small capacity scooters rather than the large-capacity bikes favoured by the West. So what do you do when all you want is a sweet, 70’s inspired café racer that will turn a few heads and the only bike you have handy looks like an cheap extra from a Transformers movie? You call StudioMotor, that’s what. Donny started by describing the client’s brief. “He came to us with a cool concept – to turn his almost brand new Honda Tiger GL200 into a café racer. He’d apparently been surfing the web and fallen in love with a picture of a custom Harley Dyna that had been done in a café style with a white, red, and black paint job. He was over the plastic bodywork of the GL in stock form and fiddled with his phone for a minute before showing us the Harley with a massive smile on his face. I’m not sure if it was due to his teeth or the Harley’s white paint, but we immediately nicknamed it the ‘White Racer’ and began work.” “After rubber, the boys got on with the process of making the bodywork. Selected 1.2mm galvanized plate was formed according to the clients instructions. Once the process was complete, they turned the pieces over to Comet Studio body shop, which laid doen the white base, minimalist black and red candy stripes and clear varnish using Sikkens colours.

While they were waiting for the paint to dry, all the other key items on the bike were powdercoated satin black, and a nice pair of drag bars were selected along with the remaining bits and pieces to ensure a unified overall look. Finally, Flash Custom Mufflers fabbed up some waste gas tubes that not only sounded boss, but also added a little more urgency to the Honda’s rather humble horsepowers.” “The finished bike surprises many people who just can’t believe it’s actually a Honda GL200. I think it’s a combination of the colour choices and extreme simplicity of the bike that does it.” Donny points out the customer is using the bike as his daily ride – not out of necessity, but more because of the fact that he can’t stop riding it since he picked it up. Half his luck.