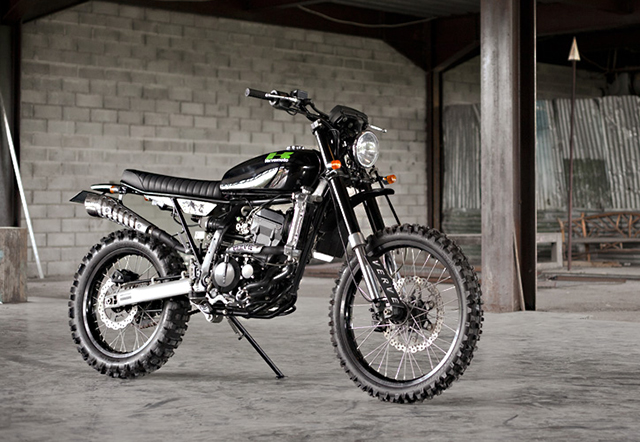 When Verve Moto were approached by a customer to build a tall, light and powerful enduro bike with a 250cc engine that could handle all the different roads Bali has to offer, they knew the Kawasaki D-Tracker would be the perfect donor. The stock bike is called a D-Tracker in Indonesia (KLX250S in most countries) and is a very popular model given the countries rugged terrain. Verve found a lot of inspiration from the many custom enduro builds coming out of Europe, but they also wanted to put their own ‘Bali style’ into the build. Before they started the build the guys from Verve sat down with the owner and designed the bike with his input. “The concept was not difficult to draw” says Titus from Verve. “Our ideas and his were the same. Bike must look clean, aggressive and without any kind of plastic he said.” So the first thing that was stripped off the bike was a lot of plastic. They decided to use a Yamaha RS100 fuel tank because of its size and simple clean looks. All the stock lights were replaced for smaller ones. A chopped up small fender was added and of course knobby tires give the bike the aggressive look they were after. “The top of the frame was too long and wide to install the classic tank” said Titus. “So one possible solution was to build the tank on top of it. But this made it look too big and ugly. Another problem was that the fuel pump was super tall and difficult to adapt at the tank. Only one solution was possible: a drastic modification of the frame. Keep the lines clean was always our idea. So we had to chop 3/4 of the frame, rebuild it and keep the same position of the rear shock.” The whole bike was made to the size of their customer. “Our welding guys, two young and smart indonesians, did a great job” says Titus. “The interior of the tank is modified to let the fuel pump work and the whole frame was cut and welded. In addition the box for the liquid cooler on the original bike is made out of plastic so we decided to use stainless steel to prevent the formation of rust.” A lot of work has been done to the wiring set up as well. The complete system was redone to the new body. To finish the bike off, Verve installed a stainless steel exhaust that matches the battery box and has a small logo on it. A  simple black custom seat and a classic head light complete the project. Needless to say, the customer was blown away by the end result. “He was speechless when he saw the bike finished for the first time. That’s what makes us happy”. And we’re sure he’s enjoying riding up and down the coast of Bali on his D-Tracker  with his surfboard sitting in the side racks looking for the best swell to help put an even bigger grin on his face.