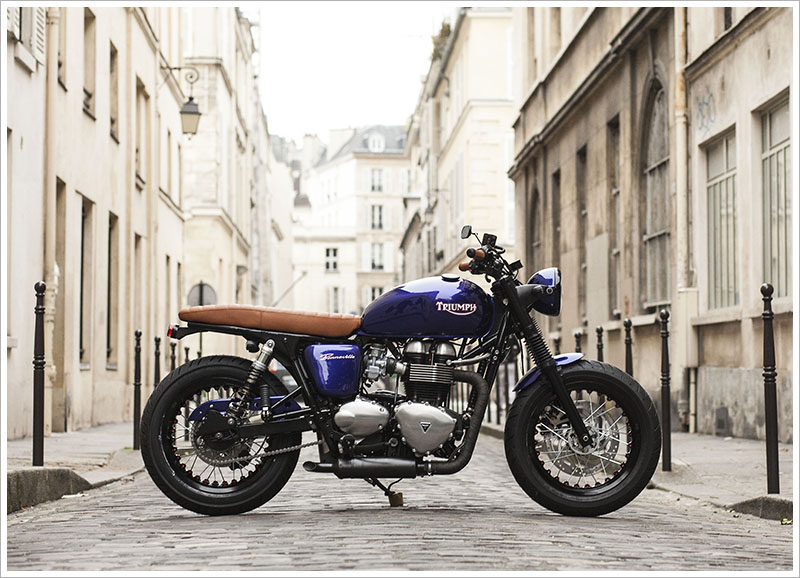 Ah the sights of Paris. Le Eiffel tower. Le Arc De Triomphe. Le modified Triumph Bonneville. The last of these is a recent addition to the visual splendour of Paris, and we have Vintage Racer Motorcycles to thank for the pleasure. This Bonnie was created for a customer who turned out to be a prince from Qatar, or an ’emir’ in french – so they named the bike ‘Bobbemir’. It has been built with all the hallmarks of Vintage Racer’s belief that their bikes should be ridden not hidden. Whether as an every day rider or something to take for a burn on a Sunday afternoon, their bikes are for blowing out cobwebs, not collecting them. This bike is as much a monument to French engineering as the Eiffel tower, but le tower Eiffel never had a chance to sport pipewrap. Starting with a standard 2012 Triumph Bonneville, the Vintage Racer crew hooked in to the build. Ditching the factory seat, a vintage camel leather bound cushion takes it’s place. Under the custom seat sits the reshaped rear guards, sporting a Daytona tail light in place of the factory one. The footrests are LSL supplied, with custom mounts to suit this Gallic work of art. The most notable part of the bike has to be the wheels though. This has been an awesome addition to the build, with Vintage Racers looking to Harley Davidson styled rims for inspiration. 17 inch Kineo rims, front and rear, mounted on Alpina hubs. The front end is wrapped in Michelin T63 120 profile rubber, while the rear is a Metzeler 160 profile tire. Part of the build brief was that the bike was to be able to support a more ample rider, so Ohlins suspension suited to the task has been fitted. On top of this the seat cushion foam is of hardier material than would normally be required. The front end has been touched up as well, with Triumph Thruxton triple clamps replacing the Bonneville factory setup. LSL handlebars enveloped in brown balloon grips, sit above OEM Triumph fork gaiters. The exhaust is something different, a set of silencers usually found on a Honda Dax have been treated to black ceramic and exhaust wrap treatment. Finishing almost level with the swingarm pivot point it leaves the custom drivetrain open for inspection, complete with perforated chainguard and 45 sprocket drive setup. Specialised custom touches such as the camel hide seat, and Kineo wheels, give this bike the chance to stand out amongst the sea of custom bikes that are out there. It’s the small things that add up, to give this bike the aesthetic quality Vintage were looking for. Nothing drastic has been done to this bike. It’s just what has been done has been well thought out, and more importantly, well carried out. Vintage Racers have outdone themselves on this build, a quick look at their website will show that their bikes keep getting better and better. And with bikes like this roaming the streets of Paris, it’s all the more reason to visit Paris, to see the beautiful sights on offer.