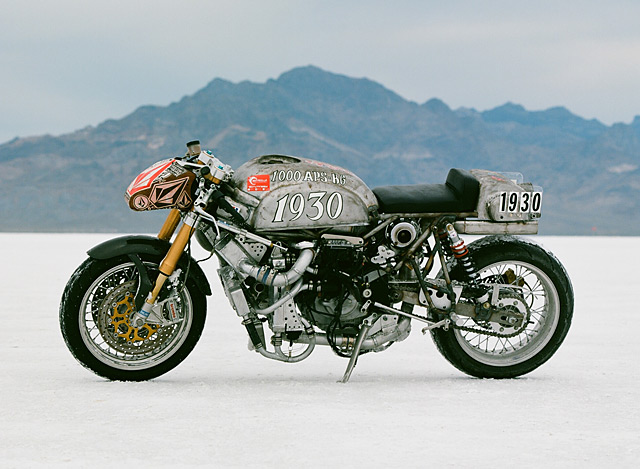 Bonneville. It conjures up many a mental image. To the average Joe, it means that motorcycle movie with the guy who played Hannibal Lecter… if it registers at all. And to most of us, it refers to a legendary bike and a popular Utah destination toward the top of our bucket list. But to an increasingly rare breed, its true meaning can only understood by actually experiencing it. Prior to going to the Bonneville Speed Trials, formerly BUB, my perception was that it was ruled by motorcycle companies and rich people there to break records. But to my surprise, there were many individual racers there just to run. They were without support, sponsors or any real help at all. They had come from all over the world with beautiful bikes: crusty, rusty, bone stock and polished show bikes alike. There also seemed to be a small but dedicated group of younger men and, somewhat surprisingly, women racers ready to carry the torch forward. Small shops like Super Rat and Sodium Distortion were making a buzz with sick bikes and movies about their pursuit of land speed records. Someone said it was like a family reunion – one that you actually wanted to attend. But, early on in the week it didn’t look like it would happen at all. The day before the event, at the edge of the salt, gray skies poured rain. It was a lake for almost as far as you could see. Tons of salt had been dumped at the end of the road to try to create a bridge to the other side, but its construction couldn’t outpace the rain. Speed Week had been cancelled several weeks before. And at the last minute, too. But there were assurances that our track had been shifted onto dry salt and you just had to get out to it. But you would need to make the slow trek to and from the pits every day through water 6-8 inches deep. The weather at Bonneville is always capricious and this year even more so. This can make racing difficult, as a densely clouded sky would crack open spilling out sunshine and then minutes later, it would be swallowed up again only to be replaced by gusting wind. It could be blowing at 17mph past the start while 3 miles down at the end of the track, it would be a lowly 4mph. Sometimes you may wait minutes or even hours for the right conditions. But, it’s in spite of, or because of these experiences that Bonneville has its allure. As we waited, I overheard a guy say to a group huddled around a bike called ‘Salt Shaker’ that the salt gets into everything, even the oil. He wasn’t lying; you taste it on your lips and it seems to permeate everything. Obviously, it finds its way into your veins too, as these salt junkies are lured back year after year. I’d bargain that once you have a taste of salt, the experience will give new meaning to Bonneville and that is what it is to be a Salt Flat racer.