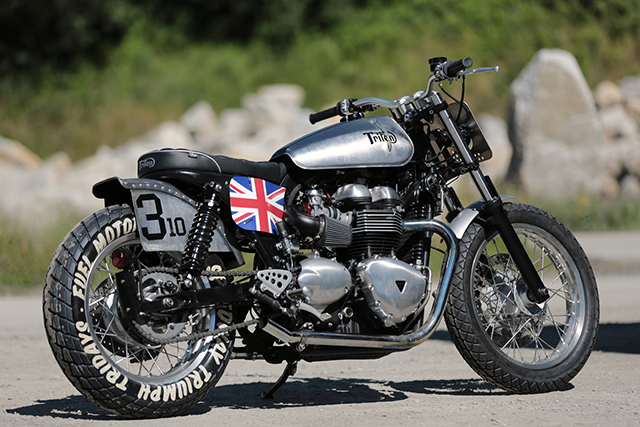 Anniversaries are something we all have to celebrate at some point; often it involves the reluctant spending of vast amounts of money in the hope of a little something in return. Well, Uli Bree had an Anniversary recently and he placed a special order, but you could have no regret about receiving this special Triumph “Fuel Triten” in return, all to celebrate ten years of organising the best Triumph bike festival in the world!

Uli is the Mastermind of Tridays a multi-day summer festival in rural Austria that brings lovers of Triumph motorcycles together to celebrate the marque with bike shows, live music, street stalls, first-class British comedy, breath-taking motorcycle stunt displays and plenty of good beer. So when the show was preparing to celebrate its tenth anniversary Uli commissioned Karles Vives and his Barcelona based business Fuel Bespoke Motorcycles to create a very special machine. And so was born Fuel Triten (Tri for Triumph, Ten for the 10th anniversary) a 2014 Triumph Thruxton EFI designed to capture the golden era of speedway. The aesthetics were always going to be a vital point in capturing the right look, the small tank could easily be from the speedway days of old but is actually a Suzuki VanVan item that gives the small, slimline look. A fuel injected Triumph houses its fuel pump inside the tank, but the stock item was never going to fit into the VanVan item, so Fuel fitted an external pump to solve the problem. Another item that wouldn’t fit was the fuel level sensor, solved by going old school with the integration of a sight tube into the side of the tank. Triten graphics, a black centreline and cap take care of the look with the rest of the tank heavily polished before being given a coat of clear to protect the finish. The rear of the bike required significant reworking too, the subframe has been cut, shortened and then a single hoop welded in place. This allows for the fitment of a much shorter than standard solo seat that is beautifully stitched and maintains a good level of comfort. The increased rear space has now been fully occupied by the speedway like rear fender that incorporates a standard style fender with large side guards for ultimate protection from the mud when the Triumph flings sideways. Finishing out the look is a race number on the rear, heavily bobbed front fender that like the rear item is polished and clear coated and Union Jack side covers. The Thruxton’s 865 cc DOHC four stroke parallel twin is a nice bit of kit in standard form but lacks the pep and scream befitting such a sliding machine. So the first course of action was to get flow to the throttle bodies improved by some forward facing air filters with a kit from Free Spirits. On the exhaust side the standard collector has been cut free and each pipe has only the smallest of silencing allowing the spectators to hear Triten long before they see it. With the engine now capable of ingesting a great deal more air the fuel and ignition maps have been tuned to match and release some extra ponies. To keep the build tidy the wiring by Solo Triumph Barcelona is hidden behind the side plates along with the battery and the aforementioned external pump. Most of the wiring components are from the ever popular Motogadget with one of their speedo’s frame mounted for a clean look. The LSL Handler bars support a Tomaselli throttle with just the small Motogadget switches and a new master cylinder leaving a clean racer look. A bike built to slide wouldn’t be complete without a race plate on the front and for a different look a small Free Spirit headlight peaks through. With the look and the power taken care of the only thing left to finish were the goodies that let this Triumph hang the back end out for as long as you keep that Tomaselli pinned. The front forks have been lowered through the triple clamps to bring the centre of gravity closer to terra firma. While a set of custom Hagon Nitro shocks, shorter than stock to match the front, take care of the rear end. Keeping Triten sliding in a semi controlled fashion are Bridgestone Trail Wing TW53 and TW54 tyres front and rear. They not only look the business in stock form but once Barcelona artist Brusco had done his work the lettering on the rear is the perfect speedway throw back. The Fuel Triten build was a 5 month affair finished in time to make its grand entrance at the 10th Tridays event. And what an entrance it was, lowered from a crane, packed in a custom painted crate in front of the main stage with a huge audience watching on. But Tridays and Uli are not about static displays, so to celebrate the arrival of his new toy, the hills outside of Salzburg were alive with the sound of a new kind of music. The scream of a dirt flinging, hard sliding, thumping twin been ridden in frenzied fashion, that’s the kind of music we all love to hear.