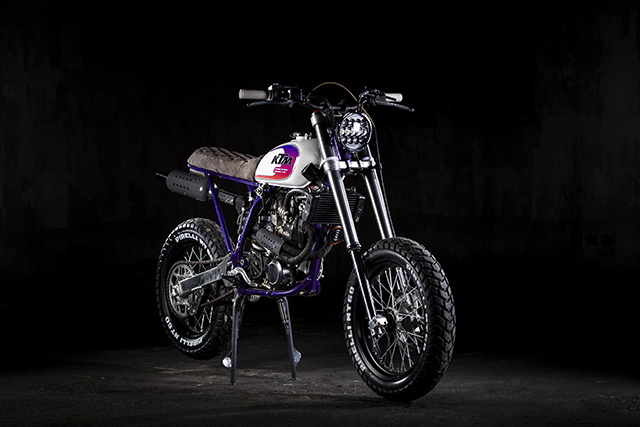 I was in Colombia for twelve hours when a man yelled at me and shoved a pistol in my face. I panicked, reverted to German and cried ‘Nich schiessen!’ before he laughed, lowered the gun and ran out of the shopping centre. Security guards in Bogotá don’t f*ck. He and his two camarada were bounding their way through the mall, pistols in hand, when I rounded a corner and startled them. Later, Gustavo from the custom shop Pasquale Motorcycles told me I’d stuffed up. You should give security guards a wide berth. And police. And soldiers. “Pretty much anyone with a gun,” he laughed.

It was the only blip I had in my time at Colombia for the Custom Built Show. Colombia’s not the wild west of Latin America as it was ten years ago. The place is safe, the people, without exception, are welcoming and the food and booze terrific. I could wax lyrical about the country for hours. But you’re here for the bikes. 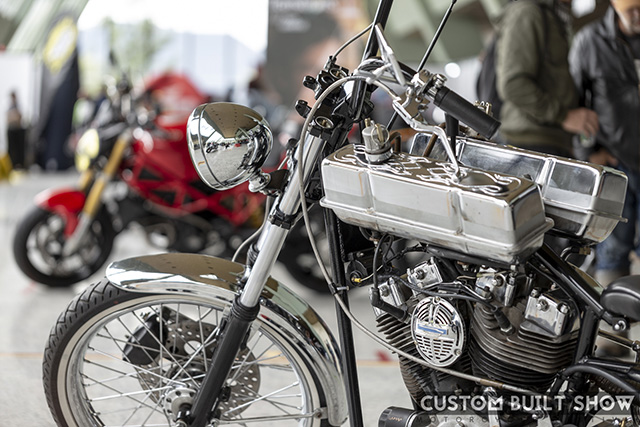 For those of you who missed last year’s writeup, it’s hard being a bike builder in Colombia. Damn hard. It’s not just the lack of high-quality aluminum or the huge expense of importing parts. Or the complete dearth of classic motorcycles to start a build with. Wracked by years of internal strife fuelled by organised crime and terrorist organisations with vaguely rude sounding names, Colombian bike builders have had to start the custom scene from scratch.

The biggest hurdle they’ve had to overcome is where a motorcycle sits in the minds of many Colombians. For most they are merely a tool; an object surrounded by little fanfare or romanticism. And that’s what the Custom Show Bogotá is trying to fix. 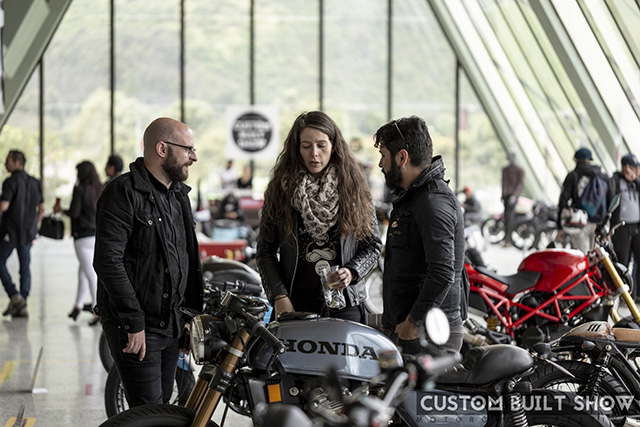 The brainchild of Camilo Ramirez, the Custom Built Show (CBS) aims to bring all the disparate elements of the Colombian custom scene together in one big annual event. It’s only the second time it’s been run but the show has come so far since last year it’s astonishing.

In 2018 the CBS was in a carpark attached to the side of Motofest, a general motorcycle event fairly similar to what you’d have in your local town. With a few particularly Colombian exceptions — dog adoption booths and grid girls holding piglets, for example. 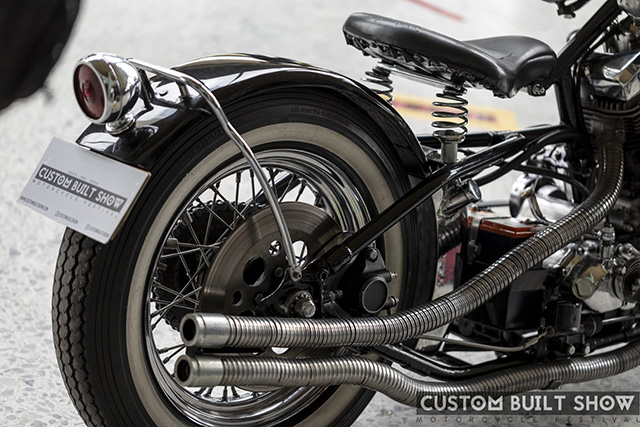 In 2019 the link to Motofest is still there, but the custom motorcycles on display sat in air-conditioned comfort indoors. Outside, Colombian hardcore bands played, KTM reps tried to peddle their bikes and a ‘run what you brung’ short enduro course had all sorts of dirtbikes being dumped in the mud.

The event was similar, but there was a massive change in the general quality of bikes on display for the CBS portion of the show. They were all astonishingly good. So here’s a few personal highlights from the weekend.

Paddock Motorcycles are known for performance work on two-stroke scooters in Bogotá. If you ever see someone bursting through traffic and warp factor nine on a PX Vespa, odds are it’s the work of John Pfeiffer and the team at Paddock. But for the last few years he’s started fabricating motorcycles. And he’s doing incredibly clean, interesting work. This is a little AKT that he’s turned his hands to and produced a perfect little run around for Bogotá traffic. Keep an eye out for John and Paddock’s work. You’re going to see more of it.

Eddison of L-Trece is one of the most popular motorcycle builders I’ve ever met. When he was giving me a rundown of his builds at the show we were constantly interrupted by people who moved in to give him a hug, slap him on the back or kickoff a rapid-fire conversation. As well as being a top bloke, the work he does on motorcycles is terrific.

And with limited material too. The fenders on this XT were bent over his knee (English wheels are damn hard to find in Colombia) and the whole rear shock assembly required a mountain of work get right. As well as the XT he also had this tough KLR650 doing the rounds of the show. 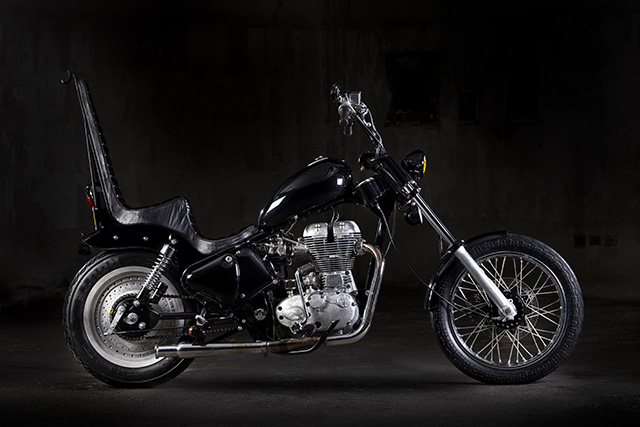 Lastly, here’s a real head turner from CBS. It’s Royal Enfield built by a local photographer, David Uribe. A huge fan of the 60’s and 70’s chopper movement but without any real prospect of picking up an old knucklehead or Bonneville engine he decided to go build his own around a UCE bullet. There’s a host of things going on with this bike, the highlight of which for me is the hook on top of the sissy bar. That’s for when he buys bags of fruit from the local street vendors. Genius.

But despite there being 30 or more deserving motorcycles at the Custom Built Show, there could be only a few winners. So here are the motos that rose to the top at CBS. 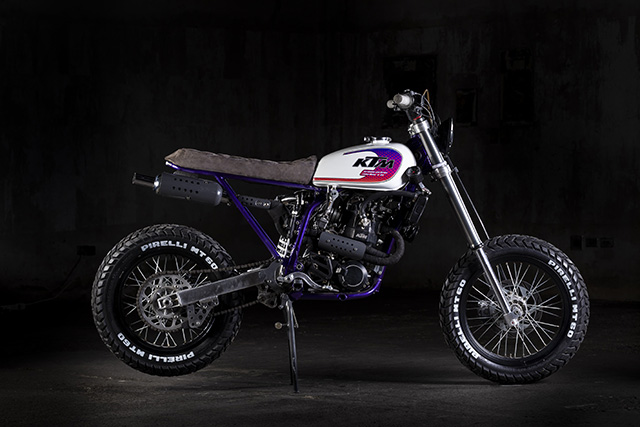 Nobody in Bogotá can bang out a bike like Andrés and his team at Lolana. The walls of his shop are splattered with photos of over a hundred bikes he’s worked on, with all makes and models represented. His shop is a two-story labyrinthine goldmine of fabrication equipment and every kind of motorcycle you can imagine. And this time he’s taken out third place in the competition with this incredible KTM400. 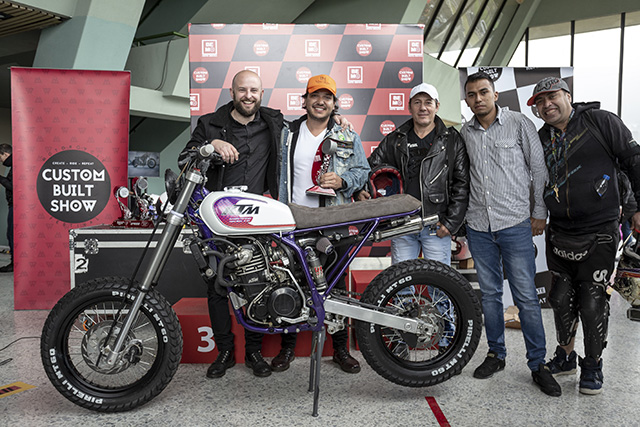 The colour scheme screams 90’s more than ska band, with a purple and pink livery making it pop more than any other bike on the floor at the CBS. It’s great to see a bike from this time period carry its lineage proudly. But other than that initial whack of late-century optimism there’s a few neat touches that pushed it to the front of the pack. Firstly is the fact it can be taken back to stock. The owner is an obsessive KTM nut who wanted to ensure the bike could be returned to stock. Lord knows why you’d ever want to do that when it looks this good as this. And the amount of detail that has gone into the build is terrific. 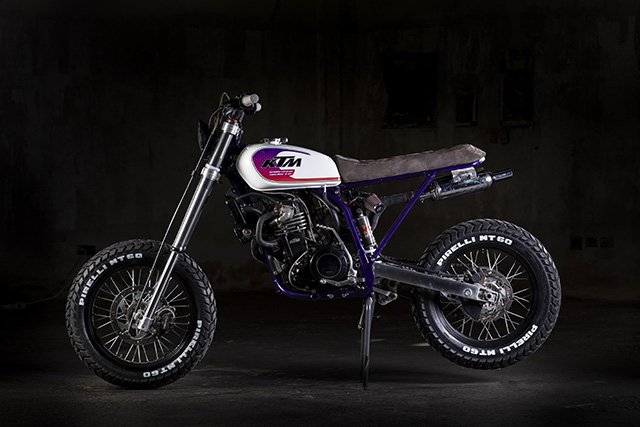 The centre standard folds up and locks into place, with protrusions to act as pillion footpegs. The exhaust is cut down from a Royal Enfield. The suspension has been completely rebuilt and set up for the owner. There’s an incredible amount of work that’s gone into the radiator assembly to ensure the bike doesn’t get too hot. A kickass bike. 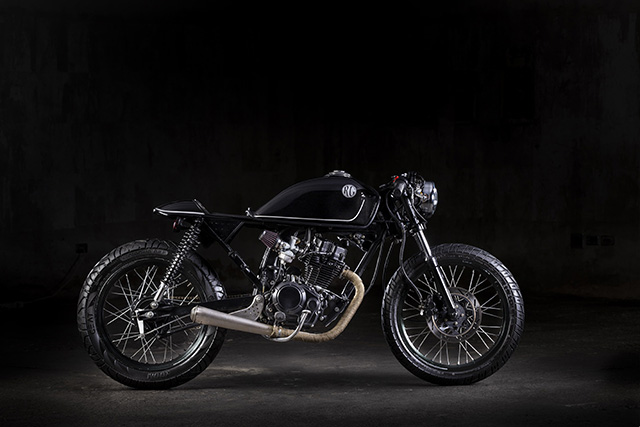 2nd place went to a crowd favourite – Rockers Garage’s AKT. If you haven’t heard of that brand before, you’re not alone. AKT produce the workhorses of Colombia; affordable, working-man bikes costing between $700 and $1500USD, depending on the model. In part this was Pipeburn’s pick because of the fastidious workmanship and partly because it was built from a base model that the average Colombian can actually afford to buy and chop up. We also loved it because of the story behind the build. The ever-smiling head of Rockers Garage, Alvaro Guzman, built the bike for his daughter. And as a typically overprotective father he made a few design decisions to ensure he could keep her in check.

The seat was made deliberately short so she couldn’t pillion her boyfriend. The padding is minimal, so it’s too uncomfortable for her to ride very far. And given his daughter is on the vertically challenged side of things it’s been built as low and as light as possible. 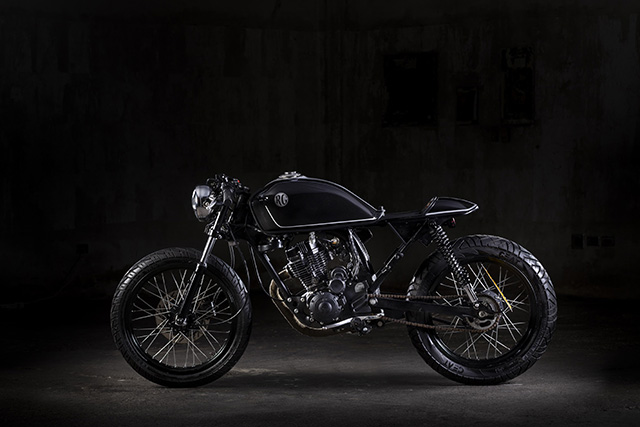 La Negra was built with excellent attention to detail and took out the public choice award over the two-day event. And rightfully so. It’s a gorgeous, light little bike that would be as much fun to ride as it is to look at. Well, for fifteen minutes or so. 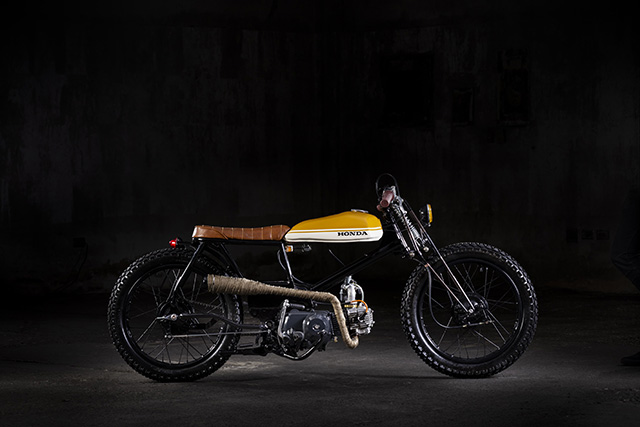 I love this bike so damn much. I wasn’t the only one, with both the audience and the fellow bike builders at the CBS spending plenty of time kneeling beside the Hornet taking in the details. And there’s a hell of a lot going on here. Some of it is easy to appreciate. The brass wire used in lieu of cable ties. The immaculate paint job. The scratch-built handlebars. 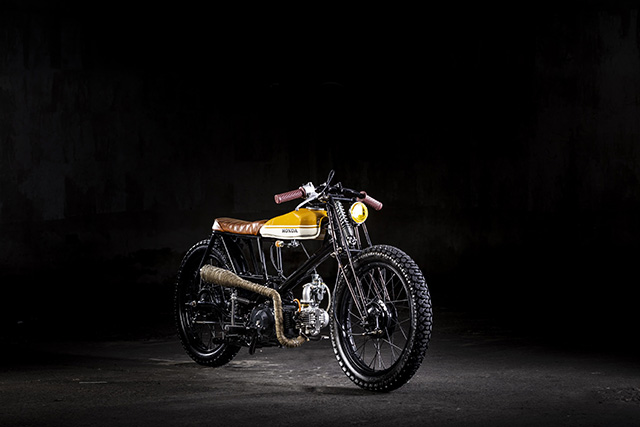 But there’s way, way more going on here when you know what you’re looking at. The entire rear subframe has been made from scratch. The swingarm. The springer-esque front end that’s actually more of a variation of a BMW Telelever design. It’s a glorious little thing.

But when you consider Clav’s love for diminutive Hondas, it’s not too surprising. The unassuming head of the shop, Oscar Clavijo, lives and breathes them. He builds them. Races them. Commutes on them. Obsesses over them. And it shows. 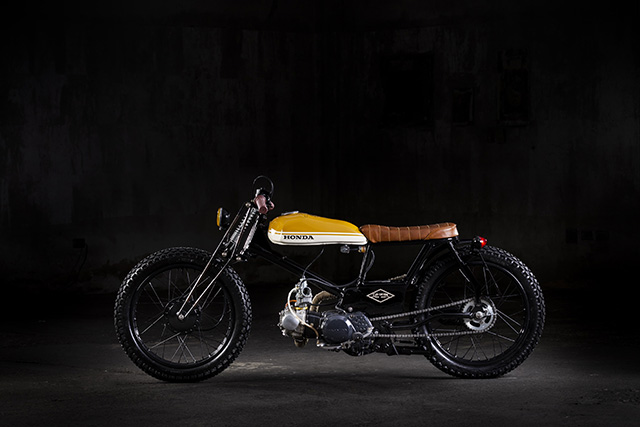 It was built using jig to place the frame and wheels in to work out the geometry and stance, and then built the swingarm and front forks ‘in’ from that. Technically gorgeous, it had a presence on the show floor that made it impossible to walk past. Unless you didn’t happen to look down. You could damn near trip over it.

I was blown away by the scale of the show and the quality of the bikes at the CBS. In the space of only a year it’s managed to draw in the best bikes in Latin America and act as an impetus for the local shops to improve their builds. And man, have they improved. The fit, finish and attention to detail was so much better than last year I was flabbergasted. The event was better laid out, ran smoother and more enjoyable than last. 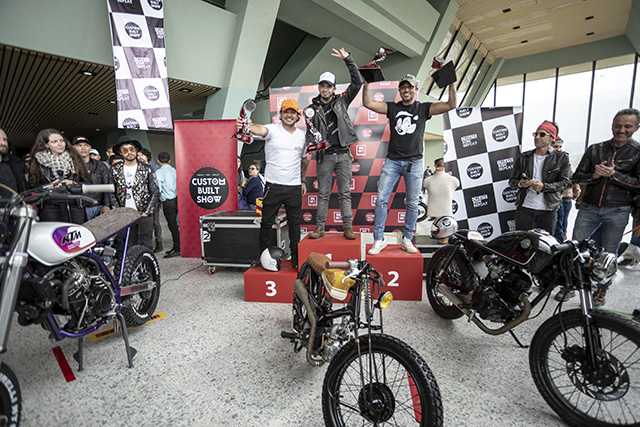 And it’s largely due to the guys that run the event. The amount of hard work put in by Camilo Ramirez, his partner Andrea Velázquez and teammate Andrés Pinillos was astonishing. It’s not like running an event in the west where sometimes things can fall into place. They’ve had to work impossibly hard and pull unfathomable hours to get it to work. And it paid off.