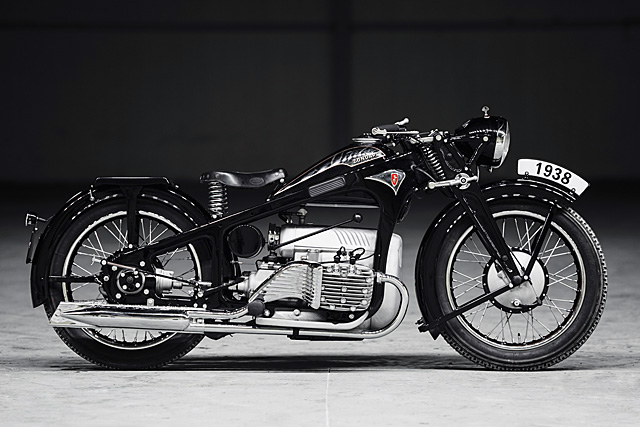 The name may sound like a ‘special’ Amsterdam lollipop, but it is in fact that of a truly innovative pre-war motorcycle company. Zündapp, the now defunct German motorcycle makers based in Nuremberg, had two very distinct types of motorbikes they produced. Largely defined by the periods pre and post World War II, their post war motorcycles like the Sport Combinette have been featured on these pages before. They were a small capacity 2-stroke with just 2.6hp – basically a lightweight urban transport vehicle. But before the war, Zündapp produced “Heavy” motorbikes that came under the K classification, standing for “Kardanantrieb”. What does that mean? We’re glad you asked… First unveiled at the Berlin Motor Show in 1933 the K series was produced in a range of engine sizes, but this 1938 K800 represents the finest of all examples, the flagship model that introduced new technologies and a level of sophistication rarely seen anywhere else in the world. The styling was elegant, clean and very German in its precision, the engine cases hide all the components, including the carburettor the designers didn’t want you to see. The large spoked wheels accentuate the smooth lines of the frame that encased the fuel tank, while the fenders were manufactured to the most rigorous of standards ensuring a level of fit and finish that would impress to this day. But as good as it looked the K800 was largely engineered to be a reliable, go anywhere machine that used the very best of technologies to combine performance and function few others could match and it’s engine was front and centre in the fight. Zündapp wasn’t the only German maker producing Boxer engines at the time, but it’s clear from the design aesthetics that BMW and others took a few hints from their fellow Germans. Clearly Zündapp was ahead of the curve when it came to refining their own flat engines to look as good as they performed. Early K series engines were as small as 200cc, but it was the advent of the 600 and then the 800cc units that became the staple of the line up. The 4-cylinder, horizontally opposed, air-cooled engine was developed over a number of years and only released to the market when the engineers were entirely satisfied that both peak performance and reliability had been achieved. The conrods featured a bronze-backed bearing while later models featured needle bearings on the big end. The air-cooled heads were side valve but were known for their exceptional flow properties that produced a flat torque curve across the rev range. Fueling for the 1938 model was provided by an Amal carburetor resulting in 20hp or 22hp for those models fitted with an accelerator pump. The beautifully constructed twin exhausts would set the standard for years to come and their increased length meant that although redline was not far beyond 4000rpm, controlled back pressure made tuning for a smooth ride much easier for the Zündapp engineers. Spark was provided by a Magneto and a heavy boot on the left-side mounted kickstarter fired the relatively big capacity four into life. Electronics were relatively simple, although standard at the time, 6v but still enough that the German Army favoured the K800 for it’s all round ability including being able to power external lights or even a field radio. But perhaps the most revolutionary aspect of the entire K series model range was the “Kardanantrieb” a fully enclosed drivetrain that featured a smooth operating driveshaft. In a time when many manufacturers still featured engines with exposed valve springs and pushrods, not to mention almost exclusive use of separate engine and gearbox housings, this fully combined system was state of the art. The flat four with driveshaft would later be copied by Honda on it’s 1974 Goldwing and has been renowned ever since for its smooth operation. Feeding the driveshaft was a well matched 4 speed gearbox with a single plate clutch that provided both easy operation and reliability that was almost unheard of at the time. The drivetrain was all but flawless, expect for the need to clean the rear cylinder spark plugs that were known to foul due to insufficient cooling. Unlike modern roadbikes that feature lightweight frames, fully adjustable suspension and slicker tyres by the year, the one feature they are neither designed for nor need to contend with are the brutally bumpy unpaved roads of the 1930’s. For Zündapp’s team of engineers these were the roads their motorcycles would have to deal with on a daily basis and the challenge of creating a smooth, sporty tourer that could withstand such extremes was not an easy one to overcome. Technology at the time necessitated a driveshaft engine could only use a rigid frame, but to build into the frame a level of controlled flexibility, style and lasting strength they turned to pressed steel that in gloss black paint also looked every bit as incredible as it performed. The front end utilised a shock sprung girder, the forks of which used the same steel as the frame and the engineers were so fixated on perfection the links combine to perform the perfect parallelogram, still not as common as you might expect. Stopping power came courtesy of drum brakes front and rear and with a relatively low weight of 215kg and top speed of 110km/h proved to be more than adequate. The controls were simply stunning, bar end levers and soft gripped bars provided easy operation and steering, while the rubber footpegs soaked up the last of any vibrations that were not tempered by the shaft drive. The rider sat aboard a beautifully stitched sprung solo seat and when it came time to pull up, simply folded out the footboard that brilliantly doubles as a sidestand. You can’t imagine what it must have been like to climb aboard such a majestic machine in 1938, but thanks to The Motorworld by V.Sheyanov (the Russian owners of this Zündapp and also owners of one of the most impressive pre ‘45 collections of motorcycles in the world) you can more than just imagine. Special individual tours of their museum are now available. And by ‘special’ they mean ‘you get to ride any bike you damn well want’. Apparently, it’s the only place in the world that lets you do this. Sounds like our kind of holiday.