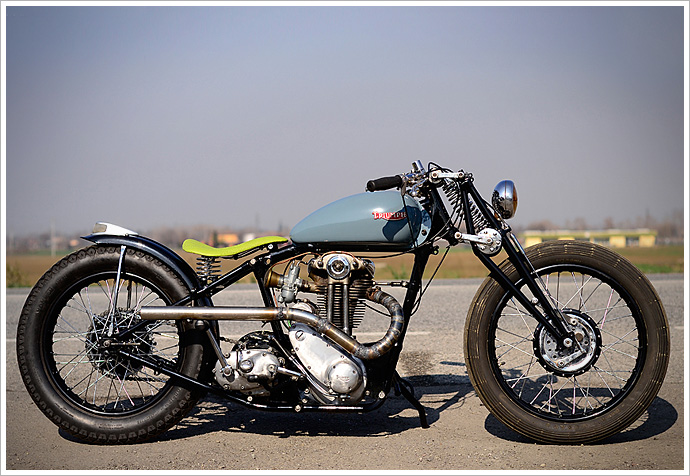 Well, it’s a lazy Tuesday night here in a very Autumnal Sydney. Scott is away on some godforsaken mission in the bush and I’m already buggered from work and wishing it was the weekend while knowing full well it’s three days away. I have about as much energy for writing a witty opening to this post as a Russian mobster has respect for following the “please don’t shoot innocent bystanders when involved in a gunfight” signs plastered all over Moscow. What am I crapping on about? Who knows. But what I do know is that I haven’t been able to get this bike out of my head since I first laid eyes on it while researching the “Bolo Shit” post from last week. Is it too soon to post another bike form the same shop? Probably. Am I really fussed? Not a jot. Am I suddenly the world’s biggest orange headlight fan? You bet. Like the previous BR Moto bike we featured, this one has the pleasure of supporting the butt cheeks of none other than the company’s owner himself, Matteo Mussi. With a collection that has hit two for two out of the park, I’m beginning to get a little jealous of the guy, to be quite frank. And although the bike is still “under construction” with its slaggy welds and shocking green seat, I’m sure you’ll agree that it’s a flea’s puce pube away from being one of the nicest vintage bobbers we’ve featured on Pipeburn in a long while. Other points of interest for the trains spotters amongst us include the Avon rear and Italian “Ceat” up front, the open clutch, the raked and girdled girdered front end, and the always me-pleasing copper Texas Tea plumbing. Suggestions for the final seat colour will only be accepted if written on the back of a stamped, self addressed envelope and posted to Pipeburn.com c/o that house on the corner with all the loud old motorbikes in the front yard, Marrickville, Sydney, Australia.