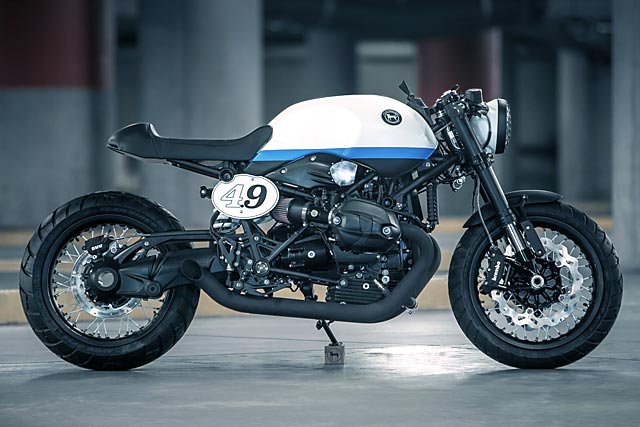 There is a symbiotic relationship with surfing and motorcycles that is hard to ignore, and it’s one that has existed for decades. When it’s just you and your board or bike, the rhythmic flow of the next corner becomes just like the turn at the bottom of a glassy wave. You’re alone, just you and a handcrafted creation doing your best to become one with nature. In areas around the world the two have become inextricably linked, from Bali, to the Bay of Biscay, Bondi Beach and the entire West Coast of the Americas. It’s here we find Mexico’s Catrina Motosurf, who build incredible machines, influenced by their environment and the ’70s surf culture. So what better way to get to the waves from their base in Guadalajara than on a brand new cafe’d BMW R nineT that shreds the sealed roads and the sand, too. Guadalajara is the capital of Jalisco state, a diverse and beautiful landscape of thick forests and glorious beaches. But as you speed your way through the spectacular countryside on route to the crystal clear waters of the Pacific coast you realise this place is special. Roll off the throttle entering each village and you will hear the famous sounds of mariachi music, smell the birria and notice a true tequila sunrise. Because just about everything you know about Mexico comes from this incredible state. It’s here that Ricardo and the team build bikes that fit right in and with the world going crazy over the R nineT it was time for Catrina to give it a go! “We decided to get one and create our own interpretation of a modern cafe racer. We wanted to make something radical, not just change parts and paint it.”

“At the beginning I was a bit nervous, because it was the first time we worked on a brand new bike.” But those nerves didn’t last long as the all new BMW was torn down to its skeleton, with an engine on the bench and a huge pile of parts.

In fact any nerves must have been washed away by the morning’s first wave as the grinder was out immediately and pieces of the frame were falling to the floor. The nineT might have a unique four-part frame, but Ricardo’s designs are classic in their simplicity and in creating the perfect stance.

The billions bits look of the stock machine becomes one symmetrical movement in every direction. “We fabricated the new subframe to fit the base for the seat, the base was made from an aluminium fin from an old sail boat. The seat is also custom-made from metal sheet and the foam was hand carved and wrapped in black leather upholstery.”

Moving further forward the tank was simplified to take on the appearance of an older machine. The airbox was removed so the clunky side covers are instead filled with handmade aluminium units and stainless mesh that helps reduce the visual bulk of the big BMW tank. The minimisation process continued further forward with the plastic mudguard replaced for a hand rolled item.

While the supports and brackets were shaved down and smoothed out. For a little cafe custom cool some side plates were made up that wear the bikes name, #4.9, it may be build five but it’s a nice nod to the nine T. “The paint scheme was made to remind of the BMW colours, but not to imitate them, the lines were designed to keep a straight horizontal line through the whole bike, and instead of making it all shiny we decided to give it a flat finish to make it different and a bit more aggressive.” That theme was continued right across the build with black powder coat used on many of the hard-wearing surfaces.

While the engine was treated to a mix of flat black paint and exposed aluminium cooling fins. Even the exhaust was given a flat black ceramic coat, all designed to keep the eyes constantly returning to the curvaceous tank. But while the engine was out of the frame for paint it certainly wasn’t ignored. With the bulky airbox and components removed the engine now breathes through twin K&N pod filters. The stock exhaust not only weighs a ton it also covers up the trick single sided swingarm. So in its place is a stainless steel MASS exhaust system, with a hot rod style twin exit finish.

To make the most of the new additions the lads wired in a Power Commander and Auto-Tune system. Not only is there an improvement in performance but the Auto-Tune unit constantly adjusts the mixtures based on all available live inputs. Giving the brutal Boxer maximum performance any time, every time.

The factory suspension setup remains in place, with the blacked out 46mm USD forks and triple trees doing a superb job of road holding. The single sided swingarm out back also has the matching black treatment with the monoshock painted a tank matching white. With radial mounted factory Brembo calipers from the factory stopping power is already good, but “to improve the performance and the look on the front brakes we replaced the original discs with Braking rotors. The brake levers were shaved a bit also before being powder coated.”

With the big items taken care of the rest of the build was about doing nothing to disturb the flowing lines, only enhance them. “The riding position had to change to create a more aggressive and sporty line, this was achieved by changing the original handlebars and installing Woodcraft aluminium clip ons.” The stock gauges stick out like dogs bollocks and were quickly shown the door. So to simplify the controls and instruments a set Motogadget M-Switch Mini controls and a Motoscope Pro gauge sits on top of a custom-made aluminium CNC´d bracket. A far more pleasant sight if we do say so.

More attitude is infused into the nineT with one of Catrina Motosurf’s trademark front headlight grills. The rear led lights meanwhile are embedded into the edge of the seat to keep it clean and protected with a tiny metal grille to match the front end.

Having already shed an impressive 30kg to improve the power to weight ratio, a tiny Lithium battery from Ballistic Performance was a perfect match. While getting that new power to the ground is done thanks to a set of tough Avon TrailRaider’s. Not only do they enhance the muscular features but allow #4.9 to traverse any of Jalisco’s wildly varying road surfaces. So as you wake on a warm sunny morning in Guadalajara, still feeling the effects of the tequila and dancing from the night before. The only thing brightening your day more than the smell of salty waves in the distance and the chica bonita now next to you is the idea of pinning the throttle on Catrina Motosurf’s magnificent moto. The girl will have to wait, the tequila is for later… the waves of the crystal blue Pacific are calling your name.