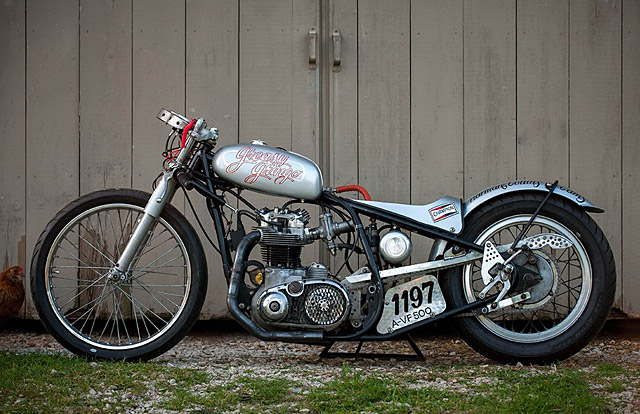 “If something’s worth doing, it’s worth doing well.” That’s what my Dad often says. But quite obviously, my Dad has never met Pennsylvania’s Dan Daughenbaugh. And if he had, he would undoubtedly have even more sage-like advice to dispense on exactly how Dan is going about his attempt at a world land speed record. There’s the barbecued third-hand engine. The less-than-perfect welds and the drain pipe exhausts. And let’s not forget the tangled mess of un-aerodynamic cabling right up there where the wind hits the bike. But you know what? If I were to attempt to build and run a land speed bike of my own, this is exactly how I would want it to be. What’s that, Dad? Sorry, I can’t hear you over the roar of the crowd celebrating my amazing victory.

[superquote]“The motor was found after a Philadelphia bike shop burnt to the ground.”[/superquote] Dan’s passion, apart from going very fast, is vintage British bikes. And this couldn’t be more clearly illustrated than by his choice of motor. It’s originally from a 1951 BSA Star Twin and it has more than a little history under its belt. “The motor was found after a Philadelphia bike shop burnt to the ground. A few days later they had a Fire Sale and there it was, blackened and charred. All the pot metal parts had melted off, but the cases were still good.” The build is impressive as it is original. After stopping every passer-by in their tracks at the National Triumph Rally in Oley, Pennsylvania last month, it took home first place for the people’s choice award. The bike has also been lettered and numbered by Philadelphia’s most sought-after traditional sign painter, Gibbs Connors. Dig a little deeper and you’ll discover all of the work Dan’s done to make the old motor run a hell of a lot faster than it’s early 50’s contemporaries.“The motor is a real mongrel inside. The stock crank is a well-known weak link in the design and at the power levels I wanted to make, it was pretty much guaranteed to fail. So I machined a crank to fit from a 70’s BSA Lightning on my old 1940s mill.” “With that done, I wanted to use longer rods to lower piston speed and take advantage of less rod angularity. I settled on Carillio Triumph 650 units that were 1/2 an inch longer than originals. These had to be narrowed by .160 to fit. Let me tell you, there’s nothing like milling away at brand-new $600 rods. I’m also running Triumph Trident pistons in a standard size, with a .063 spacer under the barrel to keep them from hitting the head. Compression comes in at 13.6:1 and I run it on a Methanol/Nitromethane mix.”

[superquote]“The valvetrain is a mix of modern Ford V8 parts and Titanium pieces.”[/superquote] “The camshaft is a Harmon & Collins roller unit that was made in the 60’s, I have never seen another one like it. I made the pushrods out of aluminum and the valvetrain is a mix of modern Ford Mustang V8 parts and titanium pieces.” Since the bike’s first record-breaking run at the ECTA Ohio Mile in May 2014, where it managed an official 90.142mph, Dan has rebuilt the top end, made a brand new stainless 2-1 exhaust and refreshed the transmission, making sure to including a new set of high quality bearings. He also upgraded the wheel bearings, just so they wouldn’t feel left out. “I’m hoping with the new upgrades that we will go well above the current 111mph record.” And just when you think the whole story couldn’t get any better, we’ve saved the best bit ’till last. Actually, the best bits. See, Dan’s work has attracted some attention in the form of a bunch of guys who are putting together a documentary on his exploits. Knowing a modern-day Burt Munro when they see it, they’ve decided to create a little film they are calling ‘A Line in the Salt’. Interested? We thought so. You can find out more by clicking through to their Indiegogo page. Or maybe you’d like a little taster first? Then take look below and enjoy.