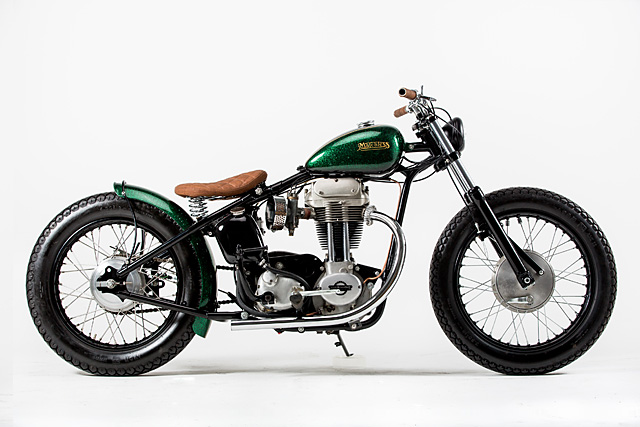 ‘A Bobber built for a tattoo shop owner.’ Those words could have started a thousand motorcycle articles over the years, but this time it is something completely unique. Rock Solid Motorcycles from Portugal are back and they’ve gone from a Harley Racer to a Matchless Bobber because when you are this good, reinventing the wheel is all in a day’s work. The pictures alone hint at the perfection that Rock Solid constantly strive for, but history also shows what a great choice of bike for a bobber build this 1960 Matchless G3LS is. Bobbers were the earliest of customs, created by ex-military men from ex-military machines. This was the start of Harley Davidson custom bike building – G.I.’s using World War II surplus HDs, stripping them down and riding them hard.

On the other side of the Atlantic, the British Military had used the Matchless G3/L in the war effort and the G3LS was the military version for the post war period. What better bike for a European Bobber build? Well, this G3 that was delivered to Rock Solid Motorcycles was indeed the right model; by all accounts it looked as if one of those WWII bombs had gone off right next to it. Having previously plied their trade for a well-known British custom builder, the Portuguese brothers behind Rock Solid Motorcycles were well placed to tackle a Matchless build of this scale. Which is lucky for the owner, as it required a full frame-off rebuild. Definitely not a job for a first-timer, as parts and know-how aren’t just a click away. For the bobber look, the frame was given a hardtail conversion and the neck was redesigned and then fabricated for an improved stance. The backbone was also redesigned and brilliantly crafted by Rock Solid from steel, something they are very proud of and that is largely unique to the Portuguese scene. By 1960, if the G3 was known for one thing it was less than satisfactory front forks. And although they’d been upgraded since the war, they still trailed their competitors by a sizeable margin. With this in mind, part of the redesign of the neck was to allow for a new front end. Honda forks were used with some Triumph triple trees holding the whole thing together. It’s a clever conversion given that the few hardtailed Matchless bobbers around use the stock front end. Needless to say, the original ride was less than pleasant. The original hubs and associated components have been totally rebuilt, relaced to the stock rims and wrapped tight in some classic rubber. The single cylinder 347cc air-cooled engine, like the rest of the bike, required a full rebuild and Rock Solid made sure it looked as good as it ran. The original wartime unit punched out just 16bhp, but factory improvements steadily increased both the power and the torque of the thumpy single. Being of pre-unit construction, the gearbox is separate from the engine. By the time this G3 rolled off the production line, the crunchy CP-type gearbox had been replaced by the stronger and more user-friendly B52. Keeping it classic, Rock Solid maintained the original Amal 376 carburettor with a tasty filter for that essential bobber look. Finally it was down to the looks department and you can see why this machine looks so good out the front of a Portuguese tattoo shop. Absolutely everything on the visual side of things screams bobber, starting with the rare for Portugal rigid Triumph Speed Twin oil tank sitting under the seat. That seat is an under-sprung item beautifully covered in Portuguese cork leather, with the hand grips wrapped in the same material. The front fender is so bobbed it’s not there at all, while the rear is traditional in size, colour matched to the tank and held up by custom-fabricated round bar struts. Then there’s that tank. The final touch of any bobber build, it’s small, perfectly painted and pinstriped to boot. Heavy flaked green paint is broken up by a black stripe that runs around the cap. Gold pinstripes break up the colour combination and the same gold is used to perfectly replicate the Matchless logo. The request from the owner was a simple bobber, unique and yet useable. Once again, Rock Solid Motorcycles have exceeded expectations. They didn’t fall for the all-too-common ‘Harley with a Springer front end’ to get the job done. Instead, these Portuguese builders took everything they learnt in the UK, introduced their own fabrication prowess and added a touch of continental European design to create a Matchless Bobber like nothing the motorcycle world has seen before.