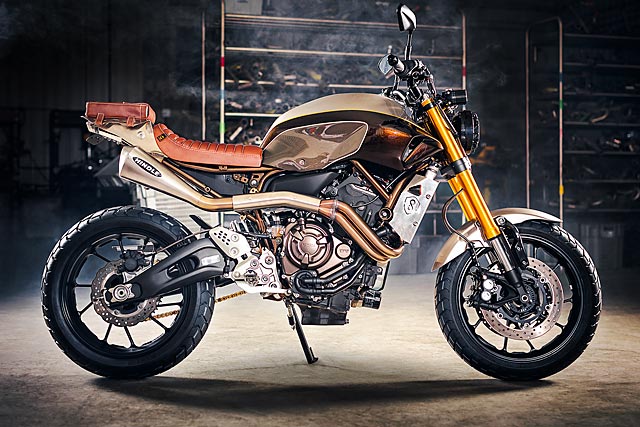 When Yamaha released the bonkers street-naked MT-09 with its lush torquey triple, the promise from the Japanese firm was that a baby brother was soon to follow. It seemed an odd move and out of step with most model line-up launches, where the most exciting stuff is saved for last lest the “lesser” bikes be overshadowed. But as soon as the first journalist cracked the throttle of the twin cylinder MT-07, any fears were quickly allayed. This was one hell of a fun machine! Now entering its fourth year of production, Yamaha Canada decided it was time to show the world that the little street weapon had more than one trick up its sleeve. So having seen the work of Rob Chappell of Origin8or Custom Cycles in Ontario, they brought him in to create another Yard Built beauty. Eagerly ready to take on the mission, Rob promised he’d deliver a bike that anyone at Yamaha would love to own. It was no empty threat, and the result is this go anywhere fun machine known as ‘60/40’. With the paperwork signed the bike delivered to Rob was a bone stock 2016 MT-07, known as an FZ-07 in North America, in the purple/blue with silver combination. “After some discussion with the Yamaha rep they wanted to show that the bike could be more than just street, it’s got a cool twin motor, it’s light and a good price point to modify and so we settled on a build with an off-road twist trying hard not to call it a ‘scrambler.’ I wanted to build a bike that a city dweller would enjoy on the street, maybe as a bit of a hooligan, but could also head up to the cottage on the weekend and hit some of the fire roads along the way,” explains Rob about how the design of the bike came to be. But if the pressure of building a custom creation for one of the largest manufacturers in the business wasn’t enough, there was one more thing hanging over Rob’s shoulder. Quite literally, as a camera crew from the TV program Motorcycle Experience would film twelve segments on the bike for TSN to be aired in June 2017. This added a new complication as Chappell had to build the bike always making sure each step was documented when the crew was filming and never getting too far ahead. Unfazed by it all, Rob asked Yamaha to provide a few extra pieces from their parts catalogue and got underway immediately. Wanting to raise the ride height of the bike a Yamaha XSR900 front-end with its gold inverted 41mm forks slots in. “Surprisingly the bearings and stem length are the same so it slid right in,” enthuses Rob. Who only had to machine some custom steering stops to make the new forks fully operational.

At the rear a standard silver shock was fitted purely for aesthetic purposes while an Extreme Creations linkage was added to give an inch more height to match the XSR front end. The stock purple wheels were sent back to Yamaha and swapped for black items; both models use the same size and style. While the all-important tyre choice is handed over to a set of Pirelli MT60 tyres, that give the bike its 60/40 name. With the cameras again rolling Rob tackled the scrambler’s body work, not an easy task on a modern bike covered in plastic. The fuel tank remains stock but the cover has been replaced with an all new item fabricated in-house from fibreglass. The factory piece features more aggressive angular lines than were to his taste so Rob’s interpretation is far more flowing, with smooth shapely curves and classically styled knee dents.

The front fender remains factory Yamaha, also taken from the XSR900. But should any rocks or debris get past, a stainless CNC laser-cut radiator cover was designed and built-in house leaving no doubt as to the sort of roads 60/40 is designed tackle. The new utilitarian styled tail section is once again Rob’s own handy work made from stainless laser cut pieces. To fill the new void a seat base was crafted and then sent out to Tuffside where it was upholstered by head honcho Chris Chappell, Rob’s equally talented brother.

While at it, Chris also stitched together a small carry bag that can double as a passenger pad. “The end user can easily remove it with the Velcro straps and add a bungee net or a hard bag – whatever they like,” adds Rob about his go anywhere design. That rugged look also gets improved functionality with a set of pegs from a Yamaha Super Ténéré for improved grip. The go anywhere design continues to the lighting that makes up an important part of changing the MT’s appearance. Having crafted a set of custom brackets Rob added a KC driving light as the low beam and two KC Daylighters for the high beam all wired into the stock switch.

Happy with the changes, the entire bike was pulled apart with the frame sent out for powder coat in a bronze burst metallic. The remainder of the paint work is laid down brilliantly by Jensen Custom Paint in Whitby, Ontario. A striking colour combination of platinum, root-beer and mocha, executed to perfection. “I played with all kinds of lines and layouts before handing it off. The final decision just followed the bikes lines and the curves of the new tank perfectly,” explains Rob. To match the colour palette the stock chain has been replaced with a stronger gold DID set of links. The same thinking was behind the now smoked braided lines by Core Moto with the added benefit of improved feel at the lever.

Up on the bars, much of the stock equipment remains but Rob did add a set of Gilles Tooling levers. While he also milled off the key location from the top triple clamp to make room for the newly designed CNC cut adjustable gauge mount that utilizes the stock set of instruments. The final port of call was to pull some extra ponies from the deceptively brilliant 689cc twin. With its 270° crank delivering that brilliant rush of torque it also creates a sound track that was begging to be unleashed. Lucky for Rob his shop is just 30 minutes from Hindle Exhaust who also work with Yamaha, receiving their bikes for R&D.

Working with Scott Cartier, Rob utilised the vast array of parts and skills on offer at Hindle to create the perfect Scrambler exhaust. “We selected a canister and literally held it up where I wanted it to end and worked our way forward. Stainless front to back. All the mounts are hidden behind the pipe, it even keeps the O2 sensor and I built the heat shield so your leg doesn’t get roasted,” says Rob with relief in his voice, all finished just two days before delivery.

The final modification was the fitment of a Power Commander unit and the scrambler was put on the dyno for tuning. But the final tune will be done when the Canadian spring arrives with current temperatures around -10 degrees outside not a reflection of regular riding conditions. With filming wrapped up the Yamaha has spent the last month doing the Canadian show circuit. Rob’s been on hand to chat with spectators and fans, many of whom were keen to know Rob will be selling a line of parts for the MT-07 developed on this build.

Reflecting on the process its clear Chappell delivered on his promise, “It was a super fun build, especially since Yamaha’s only stipulation was that the bike be street legal and delivered back in saleable condition. Funny, the marketing rep I worked with has already placed dibs on it.” Job done, promise kept!