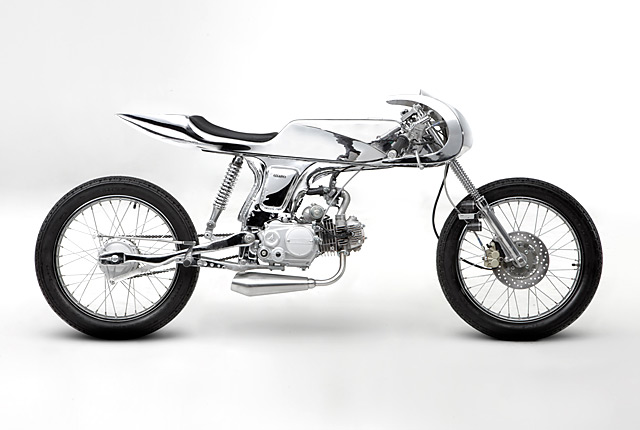 Daryl “Dazza” Villanueva of Bandit9 fame is back and once again he has left convention at the door, stepped through a worm hole and pieced together a futuristic master piece that takes its inspiration from an old favourite, a 1967 Honda Supersport 125. “I’m back in Saigon after living in Beijing. The beauty of starting over is you feel like anything is possible, which coincidentally, I feel is lacking in the motorcycle industry. A sense of possibility.” So he has done exactly that; created a new fully functional piece of futuristic riding possibilities known as ‘AVA’ and available in a limited run of just nine, there are already orders from the US, Europe, and the Middle East. Five months ago when the project began Daryl had a very clear vision “I wanted something that didn’t look like it came from this era but from the generation ahead.” Inspiration from the past, a design for the future and all from right now as everything on the bike is brand new. There is no doubt the first thing that hits you about AVA is the body work, it has that T-1000 liquid metal look from Terminator 2, almost as if it’s living and ready to transform. That liquid like finish is the result of dipping stainless steel into a chrome bath. But first it had to be fabricated and the explanation is best left to Daryl “Our designs start with the unibody tank and yes; it is made from one piece of steel. This would be impossible, or at least very expensive, for a machine to make since it is a closed shape where a lot of complex curves meet straight edges. It’s exactly like fitting a round peg in a square hole. Surprisingly, it’s possible by hand. It’s all about the template – finding the right shape and finding a way to close it.” The end result, of no gaps from the front of the tank to the tip of the tail is the sort of perfection all builders strive to achieve, but is impossible when using factory components. To achieve this result, a stainless steel unibody from a single sheet of metal is a huge achievement in and of itself, that it is part of a functional motorcycle is incredible. Complementing the unibody was always going to be a difficult task as keeping those lines flowing forward of the steering head, where movement means gaps, but it’s been achieved with a beautiful front fairing that maintains the smooth flow of the overall design. “A headlight would have been a mistake since it would disrupt the liquidity of AVA’s form. So we opted for a fairing but we didn’t want the common bulbous shape. Instead, we borrowed the curves in the unibody and carried it onto the front side.” The side panels perform a similar task in that they cover a functional component, the frame, yet continue the theme at just the right quantity without ever being excessive. Formed over templates by hand the raised areas provide the perfect place to attach the only deviation from smooth lines, the Bandit9 logo, that in its simple elegance adds a touch of exclusivity, you wouldn’t de-badge a Rolls Royce.

Even the truly conventional components of AVA take on a form completely consistent with the flowing lines of the visually dominant body work. The swingarm of most modified motorcycles is rarely touched but Bandit9 have created a totally new item by sand casting a metal piece that looks as good as it functions. Included in the design are the lower supports for the twin monoshock design that only exposes itself as the viewing angle of the motorcycle changes. The front suspension takes on a raked out stance and with exposed springs in body matching chrome and with polished lower legs the most exposed design elements still stay with in the confines of the brief. Even the triple clamps hold their own amongst a litany of beautifully formed pieces with just the right amount of metal removed to create another feast for the eyes. Being a fully functional road bike the braking is more than adequate for the low weight with a drilled front rotor clamped by a twin piston caliper, while the small rear hub houses a Super Sport-styled drum brake. The fully exposed, laid down, 125cc engine provides the most mechanical element of the visuals while reliably powering this rolling piece of art with enough poke to set the liquid metal into motion. The clever use of the body panelling as an airbox and a custom-made steel exhaust with minimalist muffler both follow similar lines in opposing directions creating a smooth symmetry around the square block. There is also a very important design aspect as to why this engine was chosen “The negative space is one of the best things about the Super Sport. Although it’s from the 60’s, I think the bike looks incredibly futuristic because of that hanging engine.” There are some things you can’t hide, hey it is a motorbike after all, but stainless brake lines, all new cabling that is only exposed where it has to be, results in the cleanest look you’re likely to achieve from a functional fairing-less machine. Speaking of functionality, this bike gets ridden, a custom leather seat for comfort and not just around the block “Now that I think about it, I just went from Saigon to Hanoi in one of these. It’s a 2000 km journey from the south to the north of Vietnam in 5 days. We went through asphalt, rock, desert, inclines, rain, mud, you name it.” Those functional components include the unique clip-ons that have dual angles to bring them back closer to the rider while still maintaining the stretched out riding position. They support the a new pair of levers and neat metal master cylinder, with custom switches and black grips to break up the metal. One of those switches activates the forward facing twin projector lights that are cleverly mounted to the right side of the bike using the fender holes on the fork. There is even a horn hidden under the front fairing and the rearsets with knurled pegs for extra grip even in terrible conditions. The simple speedo reflects its image back over the chrome finish of the metal, but the fuzz will probably have bigger questions than “Do you know how fast you were travelling” if you’re stopped on board AVA.

The spoked wheels with vintage rubber is a neat tip of the cap to the ’67 heritage of the Super Sport but if Daryl had his way things would be very different. “Man, if we weren’t bound by gravity or physics, the wheels would be gone. It’d look much cooler without them! Now I’m thinking about contacting those hoverboard guys to outfit their tech on our bikes…” Which is what makes the Bandit9 builds so special, Daryl isn’t thinking about the now, but the future and coming up with ideas that could be part of a very different motorcycling experience in years to come. But until he builds a spaceship it still needs wheels, so what’s it like to ride? “Ludicrous. It’s so out-of-place on the streets because it barely looks like a motorcycle. It doesn’t matter if you’re in Saigon or New York; it turns heads. I like that, not to show off, but because it piques people’s interest. People don’t ask me what brand it is. They ask, what the hell is that?”