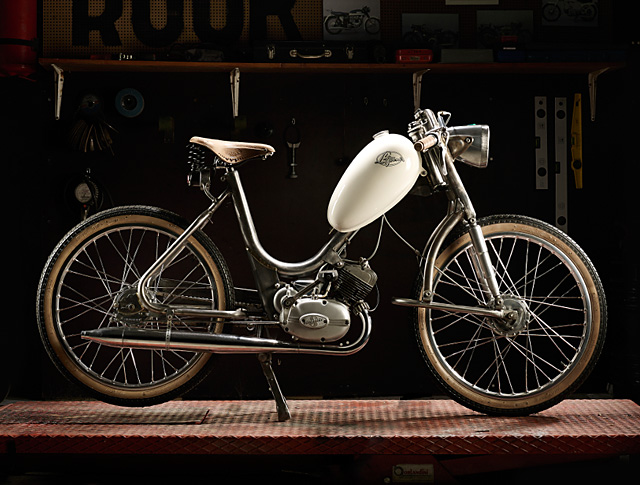 It’d be a pretty safe bet to say that most Pipeburn readers would have heard of café racers. Hell, if you haven’t then there’s probably not much hope for you. At all. But in stark contrast to the English tradition of café racing, the Dutch chose instead to race around their local village churches on mopeds. And while it would seem that something so predictable would be a godsend for the local police, you’ve got to admit that it sounds like one hell of a good time – especially if you were blessed enough to be out in front on a ‘ped like this. Meet Rook Motofiestsen’s ‘KermisKoerser.’ Rook Motorfietsen is a small Belgian garage located in Vilvoorde, about 10 kilometres north of Brussels as the Flemish crow flies. Yves Noël and Wouter Bollen do all the service, repairs and customisation of their mostly pre-2000 bike-owning customers. ‘Wout’ is an aggression expert (no, we’re not joking) in social care and confesses to be utterly obsessed with motorcycles. Yves was previously a Ford mechanic of the year and is now an instructor for the same brand when he’s not tearing around places of worship on semi-legal mopeds. It’s true; size doesn’t matter. And the proof? Take Rook’s latest – a 1967 L’Avenir 49cc moped called the ‘Kermiskoerser’. In the 60’s and 70’s, moped races around the churches of Flemish and Dutch villages were apparently quite common. ‘KermisKoerser’ means ‘Fun-fair Racer’ in Dutch and it somehow feels like a perfect name for a bike that manages to look both jolly and kick-ass all at the same time. “L’Avenir is a French expression for ‘the future’” says Wout. “And it’s also a Belgian bike brand that produced 49cc two-stroke mopeds and mofas (a European category for the next class of bikes down from mopeds) using HMW and Sachs engines from about 1959 until 1971. L’Avenir has always been one of the most well-known and more innovative of the Belgian bicycle manufacturers.” This moped is a ‘Stassonette’ (or Saxonette) model and was originally composed with parts lifted from other brands: a Sachs engine, an Aprilia headlight, and huge rear fenders. Imagine a Cadillac and you’re not too far off. “This was Yves’ first moped and therefore it had been brutally abused. What else do you do when you’re a teenager with more hormones than common sense? You race. You crash. And then you race again.” Sensibly, the boys started with a complete engine blueprint and rebuild. ‘Then, in order to improve the intake and exhaust flow, we shaved the block by 1mm, better aligned the scavenging ports and further adjusted the compression in order to optimize the engine’s output.” The old paint from the frame and suspension was sanded off and the whole she-bang was covered with several coats of shiny, clear varnish. Together with the brazed welding, this gives an industrial look with a sweet, vintage feel. “The taillight holder and the headlight trim are custom-built and we trimmed the chain guard a little. The grips are made from Brooks handlebar ribbon and the internals of the grip had to be redone completely to suit the new leather. As always, it’s all in the details; many parts on the bike are handmade. The cream-white gas tank is the only painted part, but we feel the contrast really works well.” If you like what you see, be sure and check out the Rook website. Who knows, if church racing takes of outside of Belgium you just might need the boy’s advice. Apparently the sharp right-hander just behind the Vilvoorde graveyard is a killer.