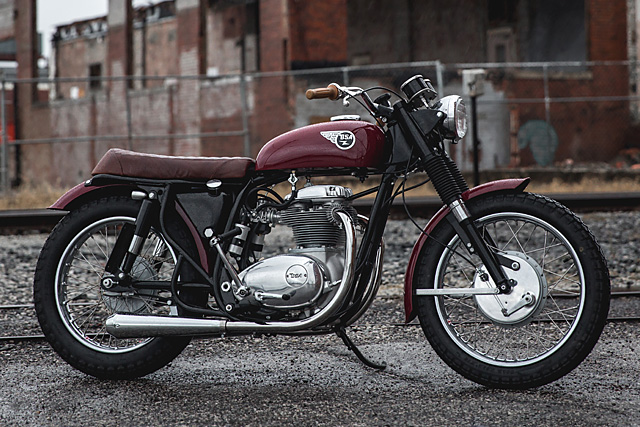 For decades, British bikes dominated the market and played the biggest role of all in fuelling the original Cafe Racer revolution. But when the Japanese hit full swing, it wasn’t long before once great companies that were household names went bust. Triumph and Norton are now ssck in full swing, creating modern machines and retro remakes that pay homage to their most beloved models. So with news Indian giant Mahindra have acquired the license to start producing BSA’s once again, only time will tell if they too will join the modern retro market. Should they need any further convincing that classic BSA’s have stood the test of time, they need only to take a look at this picture perfect example. Hot on the heels of their Triumph build from last week The GasBox of Ohio deliver this stunning 1968 BSA Royal Star, built for an owner who, like us, decided one GasBox bike just wasn’t enough. If you visit The GasBox website you’ll not only see a collection of finished builds but a section dedicated to old bikes in need of some serious love. These are available as the base for customers who don’t have a bike to bring to the party. When a Porsche collecting gentleman from Maine saw a Ducati 350 Single in a state of disrepair on the website he contacted Jesse and the build began immediately. That bike went on to be a hit right here on Pipeburn at the start of the year. But when the owner was visiting The GasBox workshop he noticed a bunch of BSA’s around the place. He wanted one of his own, but nothing Jesse had in stock, instead a much harder one to find “he insisted it be a 500cc and a single carb, not as common in the USA as one might think.” A few months after the Ducati had been delivered Jesse finally tracked down just the right BSA for the build. It was located at a nearby bike shop, a 500cc single carb as requested, but in a terrible state. This is not at all unusual for a BSA, thousands around the world seem to have lived the last decades in fields to decay and die with rust covering every surface. But Jesse has breathed life into the most devastated of machines and with the BSA on the lift it was stripped to its old bones. “Eliminating the bulky BSA side covers, large fenders, and ape hanger handlebars.” Yes, some Royal Stars came with “comfortable” raised bars and owners took things to the next level with horrific results. Returning the stock frame back to its black beautiful best came with only the slightest of modifications. The rear has been shortened so the fender hugs the tyre more intimately. Although Jesse does full custom builds, this fettling of classics falls into another category. “We don’t mind the term Resto-Mod for some of our creations because that’s what they are in some cases.” The metal work falls perfectly under this categorisation with the front fender lifted from a BSA Firebird. While the rear fender is built from scratch in-house. It’s designed to not only match the front item but work with the cut frame for a cleaner presentation than the bulky stock piece. Further simplifying the lines of the bike is the choice to swap the stock tank for another BSA item. A Hornet tank was found and restored to the sort of perfection you always get on a Jesse Basset build. The BSA Hornet tank gives the bike a distinctly American touch as the model was a short run for the US market who wanted a stripped down, factory built off-road racer.

“The owner is an avid Porsche collector and we wanted to use some Porsche under tones in the build.” So it made perfect sense to pick a colour from the Porsche catalogue and not just any colour. The Turkish Red comes from the 356, one of the most beautiful creations by Erwin Komenda and Ferry Porsche; and a much sought after car by collectors today. “And I offset the red by using touches of Silver powder coat on the wheel hubs, brake drum, and barrels.” Along with the dark hue the black of the frame and suspension components creates a timeless look that will always stand up, even as fashions change. To complement the paint and tank choices the seat had to match both in the way it was shaped and the colour. First Jesse set about reworking the stock seat pan so everything would flow from front to back without any gaps. The shorter unit perfectly hugs the frame while still creating the Scrambler feel that the Royal Star was known for. The classic leather look was completed by the master craftsperson Ginger McCabe at “New Church Moto” who is simply one of the best stitchers on the planet. The 498cc parallel twin is one of the smoothest running British engines of the time and makes a perfect match for this sleek gentleman’s ride. Stripped down and completely rebuilt the long stroke engine has the kind of torque that lets you roll on the throttle in any gear. While almost all factory bikes were a mix of black and silver engines, the all polished affair is a stand out look. Just to the customers spec it’s a single carb, breathing air through a Dellorto. For once the exhaust is a bolt-on item and not a hand-built Basset number, but finishing out in twin Emgo mufflers it’s the perfect fit.

Being an Urban Commuter bike with more than a touch of class the suspension is restored rather than excessively modified. The stock telescopic forks lead down to a drum front brake. While at the rear the iconic BSA twin shocks remain in place. Factory style rims have been re-laced front and rear and with vintage rubber fitted up so the look just never strays. There are very few shops who can say they produce bolt on bits for a BSA, but The GasBox sure do. “We also used some stock GasBox products like our license plate bracket, rear LED lights, BSA battery cover, and BSA Sparx box mount.”

Thankfully the ape hangers are no more and a low slung set of classic bars provide a much cleaner look. Fitted up with vintage style brown grips and some classy levers, the choice is first class. But one touch on the bike most won’t notice is one the owner absolutely loves. “The gauges are quite special; we used the stock Smiths units and then sent them to Seattle Speedometer to have the gauge faces match that of a 356 Porsche.” According to Jesse and the team at The GasBox, “these types of builds are very fun for the shop and a nice break from the heavily fabricated bikes that get all of the attention.” But it’s fair to say anyone who appreciates a beautiful classic, restored to perfection with only the most tasteful of custom touches will be giving this build more than a quick glance. And for the man from Maine with the Porsche collection and now two Jesse Basset bikes, you have to wonder what more he could ask for. Here’s hoping it’s another killer build and that the new owners of BSA are paying close attention.