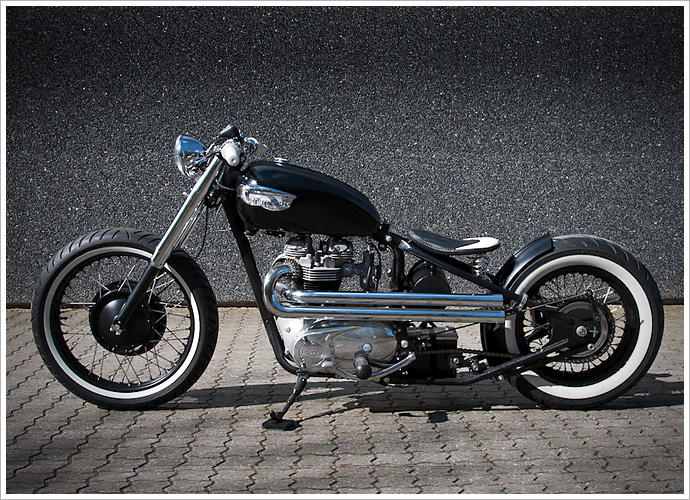 Ahhh – the classics. They’re hard to beat, yes? In architecture they have the Doric column, in music you have Beethoven and in philosophy there’s Socrates. When it comes to cuisine you have Duck a l’Orange, In art we have Michelangelo, and with languages you have Latin. But what do we have in the world of custom bikes? As much as I’d like to think that Caesar would spend most Sundays causing trouble in the back streets of Rome on board a very, very early version of a bevel Ducati, I’m almost certain that it never actually happened. So where does that leave us? I’ll tell you where. With the humble yet beautiful bobbed ’60s Triumph hardtail. It’s a Venus de Milo made from chrome, oil, and rubber I tell you. And right at this very moment, I can think of no more perfect example of this art form than this classic ’68 example made by Danish artisan Daniel Peter Dyrberg. Enjoy. Here’s Daniel. “The story about this bike is that I have always had the need for building, creating and getting my ideas constructed. Back in the days during my education as a smith, I started a small business at the technical college, engine rebuilding and tuning the other boys mopeds, having my closet in the locker room filled with new parts, took their bikes home in the afternoon rebuild them during the evening and delivered them back next morning after I had given them a couple of hundred kilometers in the morning.” “But time went and I never managed to get it any further. A couple of years ago in the beginning of my thirties I got the dream back on track, and the design for this one (#1) goes back to these technical college days. I found the frame in a US imported container that just came home to a classic bike dealer, and the rest here and there, but never had any doubt about the design. Everything on the bike is new, or totally rebuilt.” “During this build, the ideas for new designs, other brands and styles just kept coming. Often it came in the way for finishing what I had started, many of my thoughts just was impossible to put in to this #1 bike, so I just had to do one more, really I JUST HAD TO! Actually the next one halfway done was one of my RD400, which was stripped and started shaping, but then I just had abandon it to leave space for a Kawa Z400. I can’t say what it is, but the passion can come and go for each project, it is like a process I have to go through.” And if you are impressed enough by what you see here to puy your money where your drooling mouth is, the Trumpet is up for sale. Direct all enquiries to me and I’ll pass them on to Daniel. What’s that? A commission? OK – but only if you insist.