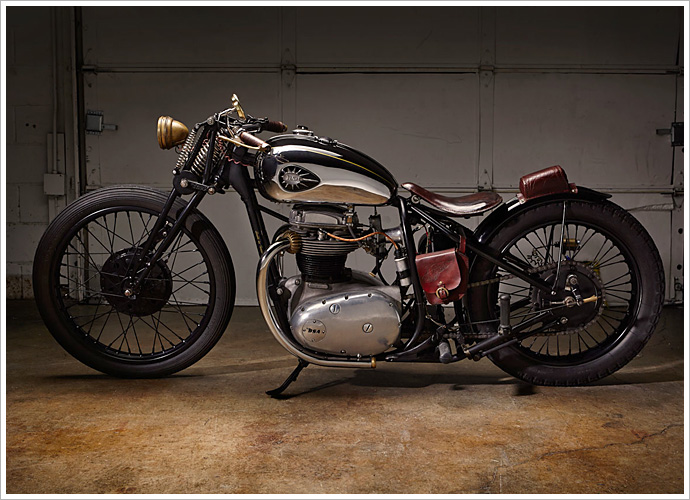 Like any creative pursuit, it always helps to have some form of inspiration for a bike build. It could be as simple as referencing another bike or builder that you like. Or maybe it’s a particular decade from history that gets your juices flowing. Whatever the case, we’re pretty confident when we say that you’d have a hard time surprising us with your choice. We’ve pretty much seen them all. Or at least that’s what we thought until we met Michael Alton. See, his inspiration was from none other than his grandmother, who also happened to be a World War II roller derby queen and a woman who liked getting around town on a ‘38 Indian Chief. Her name was Agnes; now meet the rather inspirational bike that bears her name. “So the story starts about three years ago. My Aunt and Uncle happened to be in town visiting the family and we got into a conversation about my grandmother, Agnes. Now, I’ve heard these stories before but I was much younger then and truthfully I didn’t really remember them. My mom and my aunt go into stories about how my grandmother, while in her 20s and during World War 2, was a roller derby chick and how she rode around on her brother’s 1938 Indian Chief. At that moment I got a bit of inspiration. I would try and build a bike reminiscent of the time period, and dedicate it to my grandmother. I started looking for a Indian and quickly realized that they were out of my price range. I put it on the back burner for a bit and kind of forgot about it until my buddy Josh told me that he had a 1969 BSA Firebird basket case I could have, so I jumped on it.” “Now, I’ve owned motorcycles, but up until this point I’ve never tried to take on a project like this. I mean, I’m a hairstylist not a bike builder – but I thought that I should be able to do it. I needed some inspiration on the look and typically I gravitate towards older bikes. I absolutely love the feel and esthetics of the 30s, 40s, and 50s motorcycles with the girder and springer style forks and the hard-tailed frames; they have to be my favorite. I have a web-based cloud completely full of bike images. I love the look and feel of road racing motorcycles, pre-dating the whole café look. So that’s where I would start.” “Next came the narrowing of an original ribbed duck-tail Wassell fender, cutting up a BSA C 11 oil tank so that it would fit and would also have the look I was going for. I made the seat pan, battery box and license plate bracket. It took me about a year to find the perfect headlight assembly and tail light. I also managed to track down a set of inverted levers. I did all the leather work on the bike as well – with the exception of the tooling; my buddy Victor did that.

Then came the engine, which turned out to be a bit of nightmare. I wanted to break it all the way down to crank; this bike is a daily rider and I wanted it to be able to perform like one. I put a lot of quality and high end parts in it. The first case I had cracked while putting it back together, so I had to track down another and I somehow ended up with an A50 case. I eventually got everything back together, replaced the stator with an upgraded high output unit, replaced the oil pump with an SRM one, replaced the oil sump plate with and SRM one, new pistons and rings, all new bearings, everything. I like the look and function of the late model timing side cover, so I replaced it. The top end was replaced with Kibblewhite parts, springs, valves, and valve guides. I bought a brand new Amal premiere concentric 930 carb as well.” “I’d like to thank a few people that helped me along this ride with their expertise and generosity including Anthony Aldridge, Josh Card, Daryl O’neil, Charles Gant, Junior Burrell, Victor Carmona and last but not least my wife for letting build a motorcycle in our dinning room, for 6 months.”