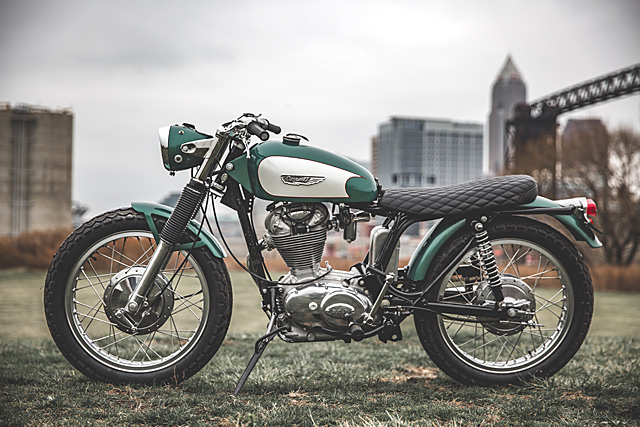 Bike builders often become known for creating particular styles of motorcycles. Maybe they have an affinity with a particular marque or a signature element to their builds, such as big horsepower or amazing paint. But Jesse Bassett of The GasBox in Ohio has just one simple word that describes every build he has undertaken and continues to create. “Perfection”. If you want a custom bike built with many a corner cut in just a couple of weeks, then Jesse isn’t your man. But if you desire motorcycle nirvana, where your builder ensures every nut, bolt and washer is to the highest of standard and torqued to exact specs then Jesse has you covered. So when a customer from Maine saw this 1970 Ducati 350 Scrambler on the GasBox website advertised as a potential project he knew he had the bike and the man to build his ultimate ride. The 350 Scrambler came into the shops possession thanks to a little luck and a lot of motorcycle magnetism. On his way to his Cleveland based shop Jesse noticed a bike leaning up against a garage under the cover of a tarp. After a few months had passed the curiosity got the better of him and he just had to know what exactly was hiding under that cover. Jesse approached the owner and what he discovered was a 350 Scrambler in less than ideal condition, the truth is it was largely a collection of bits and pieces. But the owner was willing to part with it and The GasBox crew had only advertised it on their website for less than a month when the customer from Maine came a calling. Loving Jesse’s style the customer was happy to green light the project and give free rein, with one exception, do not make it look like a dirt bike. Jesse got to work and went for a street look while maintaining all of the Scrambler’s charm with the emphasis being on a restoration to the highest level. To give the Ducati a more street look the rear frame has been modified with the kicked up look changed to a smooth straight line. To give the front lines of the bike a cleaner look he then fabricated a shortened fender that hovers with a perfectly symmetrical line over the front tyre. The rear fender is more of Jesse’s work and is a classic example of the attention to detail he applies when restoring or making parts, every line is hot rod straight. The rear is also shortened as there is no need to prevent the rooster tails of mud that a stock Scrambler was designed to produce, this machine will be treasured. There are no side covers and much of the mess that once lived under the seat is now contained in a brilliantly fabricated box that will leave old Ducati designers wondering “Why didn’t I think of that?”. With the lines of the Scrambler as clean as can be and a much more street orientated look achieved Jesse could get on with creating some personalised touches that would set this Ducati apart. The tank was taken from a 450 Scrambler and beaten and shaped until it was literally flawless, Jesse just refuses to say a part is finished until such a state is achieved. The period badges are in place for some classic Ducati styling and the fuel cap is more Italian beauty that makes you wonder why everything these days has to be so generic. The 350 headlight does its dual job of lighting the way and looking incredible and with Jesse happy with the way the tins were looking it was time for paint. The owner of this brilliant bike also happens to have a taste for classic cars and the colour chosen is a vintage Aston Martin green that matches one of the vintage cars in his collection. The colour might be British but the styling is all Italian with glorious cream broken up by neat maroon pin stripping for a classy feel and finish. The same Aston Martin green is splashed across the front and rear fenders as well as the headlight surround and being a Scrambler perhaps a nod to the British was the right thing to do. The standard Ducati seat served it’s purpose, it was durable and provided more than ample cushioning for a rough day on the trails but looks wise it was never going to be right for this build. Instead the lucky owner now sits on a more classic two up black leather item finished in diamond pattern stitching. While The GasBox range of builds may look like they belong in a museum such is their quality of finish they are also built to be ridden and be reliable. Jesse undertook a complete engine rebuild of the Scramblers 336cc single cylinder, air-cooled, four-stroke that features a SOHC. The square bore engine loves to rev, with trips beyond 8500rpm just par for the course, making it a favourite over both its larger and smaller capacity siblings. It’s not only a fun engine it looks incredible too, perhaps the most beautiful single made and Jesse has polished the cases, barrel, head and every single component even the closest inspection might reveal. Then there is the Dell’Orto carb, sure it supplies the vital air/fuel mixture, but it looks beyond incredible with Jesse treating it to a rebuild and finish that is beyond concourse level and as a standalone single component is a masterpiece, surrounded by a perfect Ducati. To give the Scrambler a flat look in keeping with the street appeal of the bike Jesse decided to fit a 19inch rear rim to match the 19inch front, where a standard Scrambler once wore an 18inch rear for a more off-road look. The high-shouldered rims have been relaced to the standard hubs, polished to within an inch of their life, before being fitted with period correct rubber. The suspension and brakes have been given the same loving restoration, hours of elbow work for a brilliant shine, new chrome and everywhere you look is glass like looking metal or paint so good Picasso would be proud. It’s easy to get caught up with the brilliance of Jesse’s work, but it is deserving in every way. The low-rise handlebars and hidden wiring further add to the clean street approach where the original Scrambler was once a more agricultural vehicle, even if it was a Ducati. According the Jesse’s right hand man “The build took a little longer than planned due to Jesse’s diagnosis of perfection. But after personally delivering this build to its’ new owner in Maine, the customer was extremely satisfied with the final product.” Which is further proof of how seriously Jesse Bassett takes this bike building business. From tracking down rare finds, to spending as long as it takes to get a build spot on, to delivering the finished item personally to its new owner. Everything is done to the highest standard and the result is builds like this Scrambler and The GasBox being known for builds good enough to sit amongst vintage collections from the very best in the world.