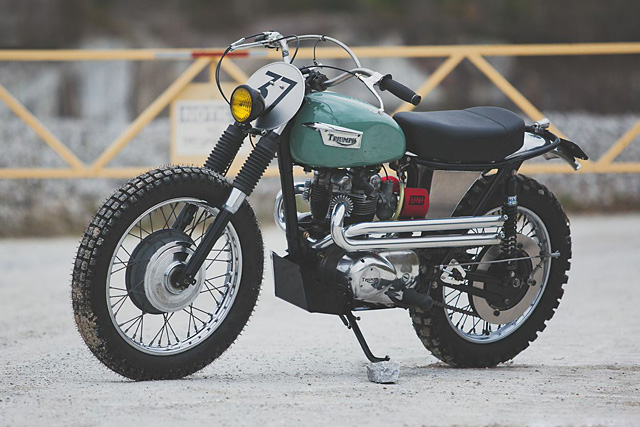 Flat caps. Wellington boots. Picnic lunches. The world of Land Rovers seems light years away from the dusty, rough-and-tumble world of desert racing. One’s all cucumber sandwiches and pheasants, the other’s realising that once you’ve hit the cactus and you can see your bike off in the distance doing somersaults, it’s probably far too late to land the jump gracefully. Yet from this ying and yang-ness of contrasts comes today’s rather splendid build, the Triumph ‘Greenhorn Express.’ Colby, the bike’s owner and builder, makes a living restoring Early model Land Rovers and spends his spare time on pursuits of a decidedly more one-wheel drive variety. Or, as he puts it, “It’s a Land Rover and motorcycle hobby run amuck…” As Colby informed us from the Vermont aircraft hangar he calls Tin Shack Restorations, he didn’t set out to build a desert sled. “This bike pretty much came together out of timing and opportunity. Over the last couple of years I had seen many modern Triumph Scramblers customized to resemble vintage sleds, and I liked what I saw. One afternoon in 2012 I stopped by the local Triumph shop and sitting there was a ’12 Scrambler – you probably know the rest of the story. Soon I had my own Hammarhead Jack Pine, and wherever I went around town people were falling all over themselves to check out the bike. So the wheels in my head started turning…” With an obvious abundance of spare time, Colby hatched a plan. He would match the two Series Rovers he had entered into the British Invasion Auto show in Stowe, Vermont with a colour-matched pair of Triumphs to sit alongside them. And the hunt began…

“After many dead ends, I found this ‘71 Daytona at a local used bike shop,” Colby notes. “The bike was a real strong runner. By this time I had done a fair amount of research and I had come up with a solid recipe for the bike. Pipes up high, build a skid plate, find an old Bates seat, an alloy rear fender, a trials tire up front, a knobby in the rear, a wide MX style bar and lighten up where possible.” Colby wanted a set of “Ekins bend” pipes which are still around if you have a 650 Trumpet, but it seems none were ever made for the 500s. He turned to The Factory Metal Works in Concord, North Carolina, and had them make up the perfect set of twin shotguns. “Then after watching several rusty, torn leather examples sell on eBay for $500 plus, I decided that the original Bates seat was a non-starter. I made a seat pan to mimic the Bates unit and had it built and upholstered by Richmond Upholstery,Vermont.” The handlebars are a stainless piece made by Front Street Cycles; they are not quite what you see on most vintage sleds as most of the older bikes have no crossbar, but Colby liked the look and respected the fact that one lone guy is bending these up in Dayton, Ohio and getting them out there. Hagon provided the longer rear shocks. “The overlay sprocket was made by Rebel Gears in Crossville, Tennessee. I had my doubts that anyone would know what I was talking about when I was asking for an overlay sprocket for an old Triumph, but when I talked to the owner at Rebel his reply was ‘oh yah, my Dad used to make those all the time for guys back in the 50’s & 60’s, no problem.‘ The sprocket arrived with all the right mounting hardware and it fit perfectly. The twin ring chain guard I drew up and then went to my friends at Tri-Angle Metal Fab. They mapped the overlay and stock sprocket mounting points, entered everything into one of their magic CNC machines and hey presto, a chain guard.” Then there’s the other touches Colby added to complete the bike and to try and stay true to what the guys were doing ‘in the day.’ A Webco-style aluminum oil tank saves weight over the old steel bag. And there’s a Webco spare spark plug holder, some spare chain links and masters wrapped around the bars. He had the rear spokes safety wired, and all the gauges, blinkers and the choke cable were eliminated along with the battery. In the day that meant a magneto, but today it means Pazon ignition and a Boyer Power Box. “I guess I lose points for authenticity there,” says Colby. “Once again, my good friend Charlie Decker of Bandit Striping did the hand lettering for me and the boys at Autobahn Body Works sprayed the Land Rover pastel green in a single stage.” Gladly, the two Rovers and the two Triumphs made it to the show and despite being sandwiched by two as-new ‘60s Land Rovers and a pretty cool ‘12 Triumph Scrambler, the little ‘71 sled stole the show. “I heard countless stories from people who had owned one or another British bike detailing just how fast, how cool and how bad-ass they were. ‘My cool uncle’ this, ‘my college roommate’ that. Everyone zeroed in on the Daytona and had a great story to tell.” “At one point, a friend and I were standing a ways off and watching the crowd mill around the Daytona. ‘You should quit building Land Rovers and just do bikes,’ he said. ‘Nobody gives a shit about those two trucks.’” We think he may have a point.