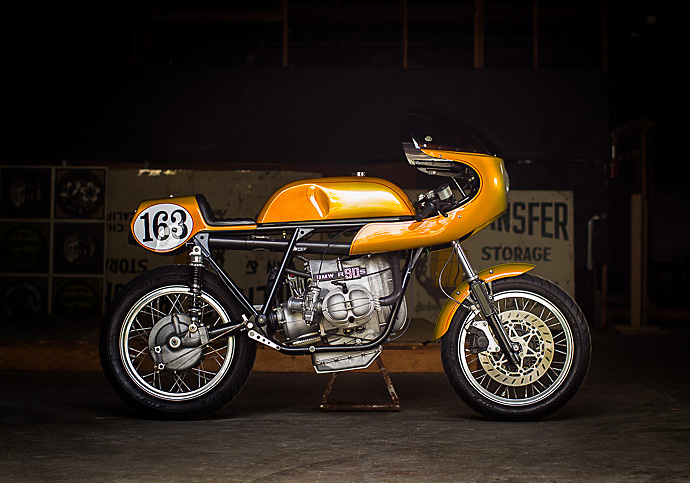 Hot on the heals of their 1 Show winning, twin turbo’d, controversy stirrin’ R100, Boxer Metal have graced our eyeballs yet again with this, their latest creation. Riding high on the current wave of love for all things boxer, the shop seems like they can do no wrong. And, as if to rub that fact in our appreciative little biker faces, they’ve gone and topped the untoppable. Sure, those two turbos would be a real damn hoot for a while… but what happens when you start to miss carving up the corners? This happens. It’s 70s. It’s orange. It’s fared to within an inch of its 42-year-old life. It’s Boxer Metal’s beautiful R90S. Boxer Metal are partners Chris and Rebecca, who met while working in and around the American BMW motorrad seen. “Between my wife and myself, we have over 30 years of building, racing, riding and loving BMW motorcycles and sidecars,” says Chris. The Boxer Metal shop is located in Northern California, at the foothills of the Sierra mountains. It’s no coincidence that the area offers some of the best riding in the entire country. “We specialize in custom BMW motorcycles, restoration, and sidecars. We pretty much do everything. Including 3D printing.” Such has been their success of late, the shop is now launching its own line of boxer go-fast parts. Need a turbo with bespoke fuel injection system for your airhead? These guys have it covered. “We found the donor bike locally; it was less than 5 miles from the shop, up a windy river road that we use as a test track. We’re surprised we hadn’t seen it sooner!” Once it was back at base, Chris and Bec took stock; it was a stock 1974 BMW R90S that had the wrong bodywork and seat, and lots of rather unfortunate aftermarket parts. Bad for a restoration, but perfect for a custom build. “In the end we used the frame, motor, transmission, rear drive and wheel hubs. Everything else was either newly purchased, built, or replaced with other 70s BMW parts.” The build was inspired by the likes of Helmut Dähne, the famous 70’s BMW racer and Chris’ idol, Reg Pridmore, who won the inaugural A.M.A. ‘76 Superbike Championship on a BMW R90S. In the face of a strong Japanese bike headwind, Reg was probably responsible for more BMW sales in the US than any other man of the time. So Chris, having built his fair share of vintage BMW road race bikes, knew pretty much exactly what it would take to build a bike that would be something more than a shallow homage. What he was after was authenticity. “Essentially, what we were going for was a street-legal version of a 1970’s BMW road race bike. We started by cutting up a stock BMW frame to make it lighter and stronger. This wasn’t as simple as it might seem; making a frame lighter while also ensuring strength and straightness was a real challenge.” Then came the donk. The stock and somewhat tired original engine was rebuilt from the ground up, and its capacity was taken from 900cc’s to 1000, which also managed to lift the horses from a lukewarm 63 to a much healthier 78. The power boost was no doubt helped along by the addition of a set of tuned Boxer Metal headers that travel high down the length of the bike and spill their sweet monoxide magic out of its petite, speedy tail. Next came a set of 38mm Dellorto carbs which, once perfectly tuned, completed the bike’s go faster make-over. Sensibly, they now turned their attention to the bike’s stop faster parts and bolted on some dinner plate brakes (that’s 320mm rotors, in layman’s terms) and pinched them with some super stoppy twin piston Brembo calipers.

Naturally, the last step was to paint it like the 70s. Orange it is! The end result is something that Reg Pridmore would have ridden with pride. This is no doubt helped by Chris including his race numbers on the bike’s derrière. And there you have it; a road-ready race bike that should turn heads with whiplash speed and also cause quite a stir on the Sierra’s faster corners this Californian summer. Were not sure about you, but we are more than a little stoked to see what Bec and Chris come up with next. But guys… please. No more turbos. We’re not sure our delicate little hearts could handle it.