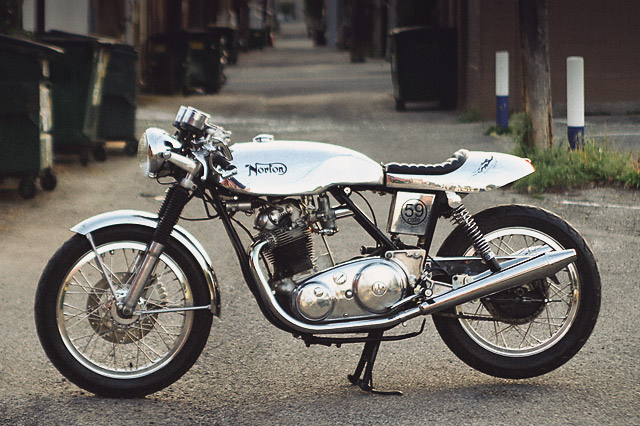 In the modern incarnation of the Café Racer culture perhaps no motorcycle waves the flag like a Deus Yamaha SR500. So when Rob decided his had to make way for something even better he set Erik Johnson of 59 Café a hell of a task and what better way to beat a modern classic than with a true original. First he tried to persuade Erik to part ways with his own award winning Norton Commando but waiting for hell to freeze over is a very long wait, so he commissioned Erik to instead build a Commando of his own that could gleam outside his Coeur d’Alene restaurant and take him home in hand crafted ‘old school’ British style. To start the project an original 1974 Norton Commando 850 was found and while complete was in less than satisfactory condition. The bike was torn down and the frame modified to accept a centre mounted Manx style oil tank custom made at 59 Café. The frame was then treated to an upturned rear loop that now supports the stunning alloy seat pan also meticulously hand crafted in house. The seat is padded and then lovingly covered with genuine leather and contrasting gold stitching. Ordered especially from the UK for this build is the liquid metal like alloy “Sprint” Manx tank beautifully adorned with the classic Norton logo. At the heart of the build is the legendary Norton twin which by 1974 was packing 828cc, giving the 850 its name, now with even more power than the early models that ruled the world and further increasing reliability. Before prying out a few extra ponies 59 Café ensured the engine and transmission were faultless in their operation and would jump to life with the first kick. Electronic ignition has brought the twin closer to the modern era while new Amal concentric carburettors and Wassel velocity stacks take care of the fuelling. Directing the Commando sound to the atmosphere is a set of genuine Andover Mufflers with “Norton” laser etched into their side. While the Norton sports near Superbike engine capacity it handled like a middleweight out of the box, but time has taken its toll and an experienced builder makes all the difference. With his own Commando perfectly setup Erik knows exactly what’s needed and fitted up a new set of Hagon rear shocks. Lowering the rider’s stance is a set of custom clip ons and to eliminate the unsightly handlebar mounts Erik computer designed and fabricated a blanking plate. The Commando sports aluminium wheels relaced with Buchanan spokes and pulling the whole thing to a halt is a cross drilled front brake rotor. Owner Rob wanted a Commando that one upped his Deus SR and would be the talk of the town, Builder Erik is a no-nonsense guy who builds old school perfection in true “Ton Up” style and when Photographer Jason finished the shoot he knew the world had to see this stunning Commando. Gentleman… done, Done and Done!