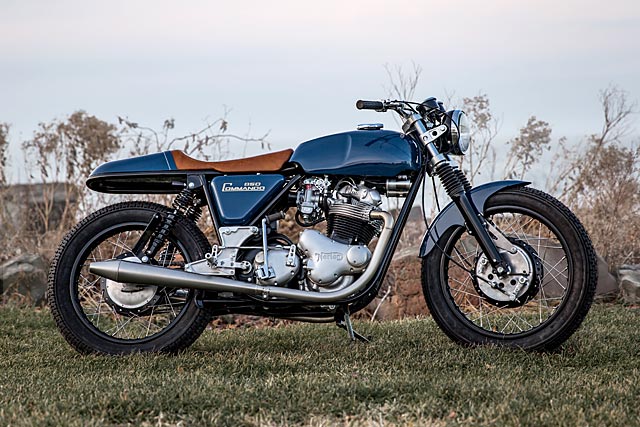 Cleveland’s The GasBox have a distinctive style of build. They’re quiet and understated and usually built around a classic vintage motorcycle. They make simple, textured machines you not only want to look at but touch, like a fluffy cat or that type of redhead that doesn’t have freckles. This time around they’ve produced another veteran motorcycle, a 1974 Norton Commando that’s certain to please both the custom bike crowd and bed-wetting, rivet-counting British bike aficionados. This balanced style of motorcycle build is a staple of GasBox, with the small shop declaring it part of their ‘Urban Commuter’ range. They’ve built a few before. It’s a style of bike that’s functional and reliable and doesn’t scream ‘custom’ at you like some of the Tourette’s inspired competition. There’s no radical seating position or lairy paint scheme. It’s designed to be ridden. It’s designed to look a just a little removed from stock. Now this ‘74 Norton Commando definitely wasn’t stock when The GasBox first came across it. It was actually in pieces – the engine was a busted-ass old relic bought in crate while the frame was hauled away from a swap meet. That combination sat around the shop for a while before Jesse Basset, head of GasBox, received a call from a client south of the border in Mexico, a gentleman by the name of Oscar Peralta who runs Harley Davidson and AfterCycles in Queretaro. GasBox set about working their magic on the old English strumpet, beginning with the frame. ‘We started by taking an inch out of the rear of the frame loop and fabricating a steel tail section,’ Jesse says. ‘Then Ginger at New church Moto made the lines of the leather seat flow into the stock Commando tank.’ There’s a surprising amount of work going into a bike that looks this good without making it scream ‘custom’. The suspension set up is a prime example of this. At the rear the bike runs Progressive shocks, controlling an 18” rim and original Commando hub. The front end is trickier, running a set of Suzuki GT750 water buffalo forks mated to a 4 leading shoe drum. It’s all held together by a tidy set of billet triple clamps from NYC Norton. [superquote]“Speedo and tacho readouts are supplied by a pair of Smith’s gauges, providing one of the prettiest cockpit views you’re likely to see outside of a Spitfire.”[/superquote]

Above the tree, the speedo and tacho readouts are supplied by a pair of digital Smith’s ‘Euro Face’ gauges, providing one of the prettiest cockpit views you’re likely to see outside of a Spitfire. The blue and gold livery is a riff on an old Porsche model and the bodywork sits atop a nicely subdued collection of brushed metal accents.

Down underneath, the 829cc parallel twin remains close to stock. The motor and transmission were rebuilt to standard specifications, but now feed from a pair of JS Motorsports Keihin CR carburettors, ensuring much better running than the original Amals. Now ‘close to stock’ won’t do when it comes to charging systems for any old British motorcycles, which are famed for running the Lucas ‘Prince of Darkness’ electronic systems. This Commando has been updated with a Boyer ignition and Sparx charging system. The lighting is now LED with integrated running lights, brake lights and turn signals all built into the single units.

The GasBox’s custom is a gorgeous twist on the old 850 Commando, which it has to be said is no ugly duckling in standard trim. However the team have once again worked its edges slightly, it’s been nipped and tucked and gently massaged it into a Norton that can impress everyone, hand-wringing British bike fanboys included.