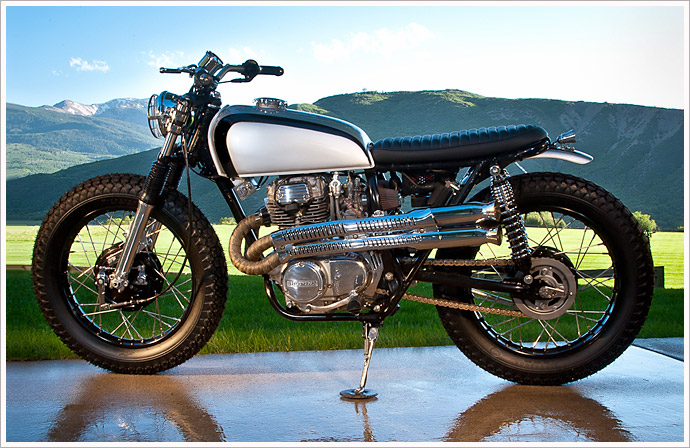 Aspen, Colorado. You’re thinking about the mountains, the snow, the cashed-up tourists, yes? Of course all that frozen water, dampness, and roads full of chains-on-the-tires virgins would make it pretty much the antithesis of what you’d call “good biking country.” Well think again, because it seems the local scene there has got their long Johns all in a twist over a rather beautiful scrambler-cum-cafe racer that has been buzzing up and down their streets disturbing the peace. The perpetrator of this public nuisance? One Casey Braaksma. And the bike? It’s probably the nicest Honda CL360 we’ve seen all year. “I live in Aspen, CO. My working background is mostly in action sports film. A few years ago I took a completely different opportunity to become a ranch manager. This gave me access to a workshop and tools. Motorcycles have been a part of my life since I was a kid, but mostly dirt bikes. I became interested in building a bike when I first saw bikes like the Wrenchmonkees, Johnny Ryland, and all the different builds I see on Pipeburn.” “I wanted a bike that would look great but could perform on the street as well as dirt roads. That’s why I was attracted to the scrambler. So I began looking and picked this 1975 CL360 on eBay for $800. It was a faded, beat up orange and ran like shit.This being my first bike start to finish there was a lot of trial and error. I did everything 2,3,4 times – so I got to know the bike very well. In the end these are the things that were done.

I pulled every single thing off the bike. I completely cleaned the frame of any mounting brackets I wouldn’t need. I also cut out the bulky center stand. The frame, wheels, hubs, trees, swing arm and brackets were powder coated. The wheels and hubs were also replaced with super thick stainless spokes. I polished the engine cases and forks. I fabricated the following; hoop at the rear of bike, new tank and seat mounting brackets, seat pan, rock guard, headlight guard, key and headlight switch box.” “Progressive suspension was added to rear and the front lowered 2 inches. Mikuni VM with K&N filters. Renthal bars. 17 tooth front sprocket. Tank from a cb350. Front fender was moved to the rear. Completely new wiring harness with new points, ignition coils and plug wires. New gold chain. Engine got all new gaskets and new bolt kit to dress it up a bit. Firestone ANS were added. I may be forgetting some things but bottom line is every nut, bolt, gasket, and bearing has been replaced with new or refurbished to the highest quality.”

And no, I wasn’t just crapping on about the buzz this bike has created. Apparently Casey has started construction on two more bikes commissioned purely on the strength of what you see here. With any luck, custom bikes will take off and the SUVs drivers with the roof racks and the motorbike-shaped blind spots will find somewhere else to break their limbs. Here’s hoping.