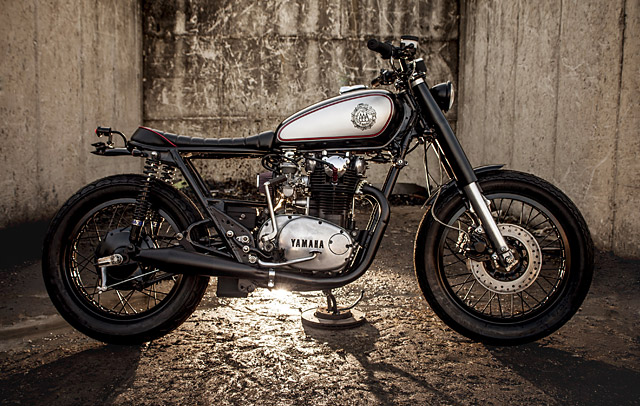 If you’ve got any lingering doubts about the 21st Century custom motorcycle scene not being a truly global affair, then prepare to have them squashed like the model buildings in a Godzilla movie. This, the 4th Maccomotors bike to feature on Pipeburn, is the product of no less than four different countries; namely Spain, Mexico, the UK and Japan. And although you might assume that such an international affair might end up looking like a poster child for design-by-committee, we’re here to tell you it’s turned out quite the opposite. Say ‘hola’ to ‘The Mexican’. Jose and Tito of Maccomotors risked an international incident by filling us in on the build. “We´re proud to introducing our latest build. It’s a 1975 Yamaha XS650 that we call ‘The Mexican’. We were commissioned by Sergio, a spanish engineer who’s been living in Mexico now for eleven years. He was in love with our work, especially with the Montesa Enduro 75. But he was a unsure about how to go about finding the perfect bike.” “On a hunch, we advised him to buy a Yamaha XS650. This bike was never imported into Spain but there were two in the spanish second-hand market. Obviously, the bike looks better now than it was when we first saw it. There was some pretty serious rust below the seat, in the frame, and on the front forks. So we decided rebuild it from the ground up.” [superquote] “We did a little research and discovered Quetzalcoatl, which is an Aztec serpent-god” [/superquote]

“We decided to give her a personalised brat look. Sergio, the owner, wanted to include a kind of tribute to Mexico, too. We did a little research and discovered Quetzalcoatl, which is an Aztec feathered serpent-god. It was related to the gods of the wind, Venus, dawn and of the arts. If you look closely you’ll see it included as part of the logo design on the tank.” “Sergio then asked us to include some BSA references as well. We were a little concerned that it might be too much, be we went with it and made the covers for front springs and included some classic BSA colours when painting the bike. We think it turned our pretty good. Now she’ll live Spain and will maybe go to Mexico, where she probably belongs…”

Jose and Tito we kind enough to supply some build specs for the bike, too. The who job started with a complete engine rebuild. Then Yamaha XS850 front forks we added along with the double disk brakes. The guys made the front forks covers, along with the seat, paint, chopped guards and wiring. The ‘bars are from Renthal and have Biltwell Kung Fu grips. The headlight is a Bates and the filters are K&Ns. Hagon shocks bounce Bridgestone AC-04 130 rear and Exedra 110 front. The foot pegs are from a Kawasaki Enduro bike and the exhaust is from Hooligan.