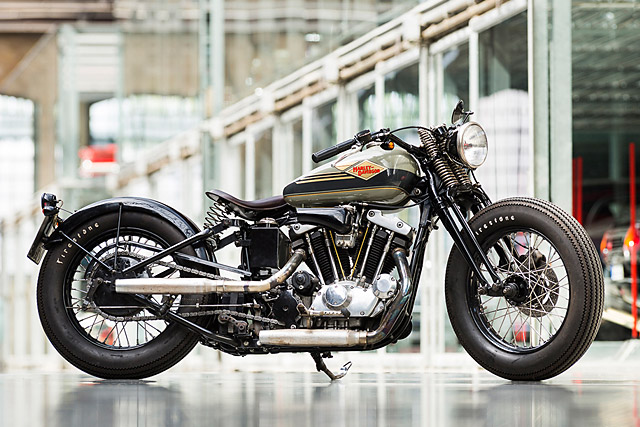 When you think about it, basements kind of have a bum rap. For instance, how many movies have you seen where the characters go down into a basement and wonderful things happen? The answer is, of course, not many. The more likely scenarios usually involve people being tied up, power tools being used for things that their user’s manual would definitely not condone and the odd sex dungeon or twelve. But here’s a story that cellar lovers all over the world will be cheering; a basement in Berlin that was used to create art rather than remove body parts. Introducing Van Hai Nguyen and his ‘76 hog Ironhead. Van is an architectural visualisation expert living and working in Berlin. After a trip through Southeast Asia, he decided to buy his first motorcycle; a stock late-model Triumph Scrambler. Not a bad bike to spend a few years learning on, you’d think… but not for Van. He had made his first mods to the Scrambler after only eight weeks and also discovered his greatest ever passion: customising motorbikes. “As a student, I’d always dreamt of Harleys. Then, a chance to buy one came up about two years ago; it was an Ironhead from 1976. Now as nice as this bike was, I didn’t really like it at all. So without having travelled even a single meter on it, it was disassembled immediately after the purchase and carried piece-by-pice down to the cellar. Unfortunately, I don’t own a garage and thus the cellar was converted into a workshop. The only electric  tools I owned were a grinding machine, hand drill, compressor and a welder. Nonetheless, I had to get by with it. Also, my budget was tiny so everything had to be made by me.” As a big fan of the clean, classic bike look, Van had a pretty good idea of where he was headed from the get-go… and that was straight to the heart of WLA town, Milwaukee. The idea of using original WLA parts or even repro parts crossed Van’s mind, but he wisely decided that this would only lead to a bike that would look like a bad copy of the original. So why not make them himself, but to a an imagined 1940s spec? “So that’s what I did. As for the chrome, I love the stuff, but not when it looks too new. So I artificially aged all the chrome on the bike using electrolysis or with a salt acid bath. Sure, it was a little dangerous, but I think the final black-oxide look was worth it.” The final product was ready in about a year. But as Van had never actually ridden it, he was still worried as to whether he’d have fun on it or not. The fact that it was a hard tail – something that he’d never experienced before – didn’t help matters. But, as Van himself puts it, “the first few kilometres on its maiden voyage were pure pleasure. I was hooked.” We’ll let Van have the last word. “The bike is a time machine. As soon as I start it up, I am taken back to the past. For me, it’s what motorcycling is all about.”