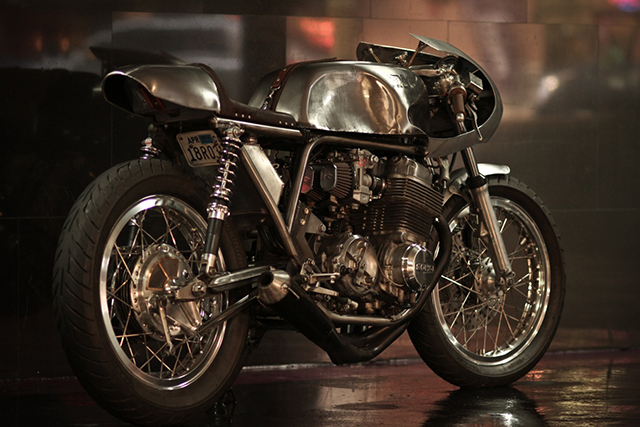 It’s not every day you get stalked by a Hollywood actor to build you a bike. But that’s exactly what happened to Mike LaFountain from Raccia Motorcycles. One day he receives a phone call from motorcycle nut and actor Ryan Reynolds asking to build him his dream bike. Ryan has a nice collection of motorcycles, but the bike that started it all when he was a teenager was a 1976 CB750. We were lucky enough to ask Ryan a few questions about this project and his passion for old CB’s…

How did you discover Mike from Raccia Motorcycles? Did you see a certain bike he built?

I found Mike through countless hours of Internet stalking. I’ve always been a little obsessed with 70’s Honda CB’s. Admittedly, even more so as they rose in popularity yet again these past 10 years. Mike had done a couple of builds which stopped me in my tracks. It never occurred to me I could probably just email him through his website and inquire about a project. But I did just that and we jumped into this thing together. What was the brief to Mike?

Not to get overly romantic about it, (although I suppose I’m preaching to the converted here at Pipeburn) but Wabi-Sabi was the inspiration. It’s a Japanese term which basically embraces a kind of beauty which is imperfect. Basically finding perfection in imperfection. I wanted the bike to be mechanically sound, but the aesthetic raw, strong and timeless. I didn’t want anything glossy, or flashy. I wanted it to feel like a bike you’d go to war on. Mike made the vision a reality. In spades. Did you have a specific donor bike in mind? Or were you open to options?

The only aspect I was rigid on, was the donor machine had to be a 76 CB. When I was a kid in Vancouver, I learned to ride on a woefully neglected 1976 CB750. I bought the thing for $600 worth of hard earned paper-route money. The bike was battered, abused and rough. It wore its scars in the manner of an aging prizefighter.

Riding it was not unlike ferrying myself to and fro on a pipe-bomb made out of duct tape and future hospital bills. But god, I loved that thing. It was an extension of myself. I’d have dragged it to bed with me at night if my landlord (my father) hadn’t surgically installed eyeballs to the back of his head.

Part of the romance I had with the bike was the two years of friction it left in its wake. When my Dad found out I’d bought the thing, he started using his “inside voice” to accentuate the three new veins growing out of his forehead. My older brother had crashed an interceptor 750 a few years earlier and nearly ate it for good. Understandably, bikes were not a welcome item at our household.

Rightly or wrongly, I fought for that old CB. I went to war for it. Despite the fact filling it with a tank of gas would likely double its value, it represented independence and freedom. Having a bike was as if I’d invited in a clear and direct path to a different life. Being young and dumb and frivolous, things changed soon enough.

Before moving to Los Angeles at 18 years old, I sold it to a local no gooder named Nick, who’d turned it into a fucking chopper. Not a fitting end to a bike that changed my life. At the time, I felt a fitting end to Nick might be a mandatory sterilization program, or at minimum, some sort of messy stabbing death – but there’s an ass for every seat as they say. And nobody forced me to sell it to him.

I think Nick works on Wall Street now. Selling a slightly fancier kind of drug. A fitting occupation for his mercenary sensibility and lead-pipe cruelty. How do you like the finished product? How’s she ride?

I’m lucky to be in the position to have someone build me a bike. Especially one like this. I really believe money’s better spent on an experience than a particular “thing”. Be it a night out for dinner or a trip somewhere you’ve never been. This bike is certainly a “thing” but moreover, it’s an experience. And of course, it can take me to dinner – or some place I’ve never been. And above all, I’m really grateful to Mike and the countless hours of sweat he spilled to build this ride.

It’s runs better than I could ever imagine. More than anything, it feels exactly like my old bike went to heaven and came back, somehow better – yet the same – if that makes any sense.

There’s no narcotic more powerful than nostalgia, and every second I’m on the bike, I feel like I just snatched a piece of misspent youth back and washed it clean. The only strange part, is the fact there’s literally nothing wrong with the motorcycle. And nobody to fight me for owning it.

It runs like it just came off the assembly line, but looks as though it were ridden to my home in New York from Japan. Including the large chunk of road which goes underwater. I’ve already put 700 miles on it and it refuses to frustrate me. That said, I won’t be dragging it to bed anytime soon. What other bikes have you got in your garage?

I own about 8 bikes, including A couple of old Triumphs, a 1962 BMW R60/Sidecar and a very special Egli-Vincent Godet. I say, “about” because I bought an old beat-to-shit and brake-less BMW I rode in the movie Safe House. We shot the film in South Africa and I’m still waiting for the thing to clear customs, nearly 2 years later. So I should have it in my garage around September of two-thousand-never.

And if Nick is reading this, feel free to send my bike back. As Mike LaFountain demonstrates admirably, time is the mother of reinvention. Anything can be undone. Check out the next issue of Iron and Air Magazine for more on this stunning CB750.