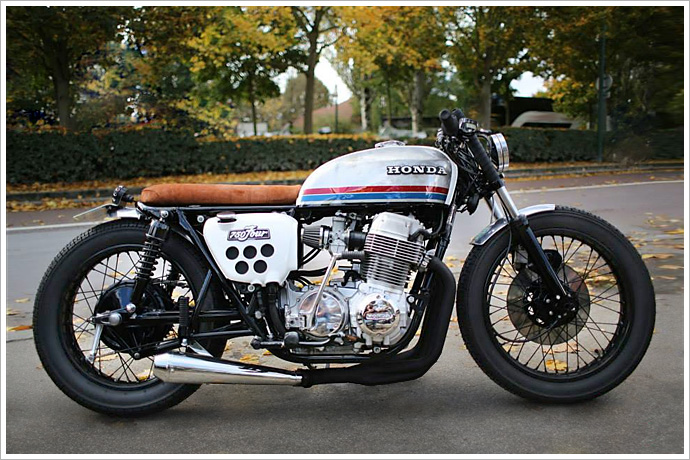 As anyone who has tried to learn English from scratch will tell you, the language makes about as much sense as a totally blootered Mel Gibson at 2am on a Sunday morning. It’s Raining cats and dogs. Keeping an eye out. Kicking the bucket. Wearing your heart on your sleeve. But you’ll be glad to know that the Anglaises aren’t the only ones with a market share in complete nonsense. The French phrase ‘démarrer sur les chapeaux de roues’ translates literally as ‘to drive on your hubcaps’ and is used in a similar fashion to the English phrase ‘hit the ground running’ or ‘get off to a flying start’. It’s also happens to be the name of the Brittany-based bike shop that is responsible for today’s feature bike, this very beautiful and very hubcap-less Honda CB750. “I’m a 31 year old Parisian guy,” says Dorian Miras, the bike’s owner. “I’ve been riding bikes for about 4 years and felt the need to get something a little more exotic. I would have loved to build my own bike, but it’s pretty much impossible given that I live in a 35 square meter flat in the center of town. So I searched all over the internet to find a workshop that could make me a cool ride and meet my limited budget.” “I came across a shop called Sur les Chapeaux de Roues (or SLCDR) on a random blog. They had built a cool little CB125 and I was very impressed with the paint job and the quality of the finish. I contacted them by email and it turns out the ‘company’ is just two guys in a barn lost somewhere in Brittany. Manuel is a former Honda mechanic and takes care of all the greasy work, his buddy Yann is an artist and designer who does the paint jobs. Yann’s sister also lends a hand and stitches the seats. The first two bikes that came out of their shed are the builder’s own bikes. My CB750 is only their 3rd build and I am therefore their very first paying customer.” “I bought a 1976 Honda CB750 K6 on the internet and picked it up with a van. The engine was dead and she had 80,000 km on the clock. But the overall condition of the frame was rather good. I did most of the design by myself in Photoshop, sourced all the parts including the headlight which was from a tractor in Ohio and the guys at SLCDR did all the tough work.” “The mods to the bike include a full engine rebuild and basically everything else, too. New brakes, wiring, the rear loop, a custom seat and some custom paint. And yes, the dent on the tank was kept on purpose. They also reversed the handlebar, added some Metzeler block C tires, and topped it off with some Vans cult BMX grips.”