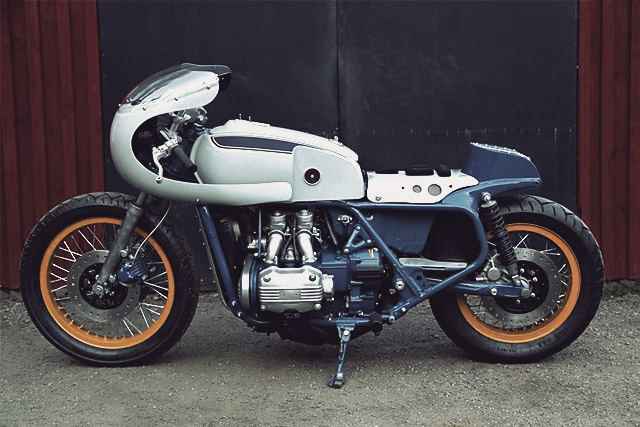 I’ve got to admit that I’m a total sucker for a good Goldwing. Now with that said, please don’t ask me exactly what it is about these Japanese gigantors that really pushes my buttons. Sure, the flat four and shaft drive tick the ‘unique’ boxes and the ‘CB750’s bigger brother’ look of the initial models really helps things along. But going from our previous ‘wing posts they tend to stand out from the crowd with a magic little something; there’s just this solidity and a ‘skunk works’ vibe they exude that gets me every time. And this bike, from the now legendary Adam Nestor from Adam’s Custom Shop in Rävlanda, Sweden is no exception. “Hello again, Pipeburn. My name is Adam Nestor. I’m 25 years old and I run a company called Adam’s Custom Shop where I build and modify motorcycles. I do anything from small parts to complete constructions including painting, turning, milling, welding and design; I’m proud to say that I do it all.” “When I started the Goldwing build, I thought that I would like to make something that was inspired by an old fighter jet. Somehow this decision made the choice of a fairing seem like a natural one, so I decided on this as the start point and got to work.” “The fairing I decided on was a Ducati 900 SS model, although it’s a little different to the stock item as I reshaped it quite a bit and modified the headlight mount, too.” “Since it would be café racer inspired, I wanted to have notches for your knees in the tank. I think that this look is one of the most beautiful things you can do to a bike. I hope that what I came up with is an original take on the idea. I liked it so much, I built on and made ​​a new rear section again channeling the jet fighter inspiration.” “When it comes to the color scheme, I was hooked on blue with a grey. But, I also wanted to get another colour in there – something a little stronger. I decided it had to be a warm yellow highlight colour. As you can see, it ended up on the rims in a metallic gold.” “All the aluminium components are brushed; it’s maybe not the best for withstanding the elements, but I think that it’s definitely the best looking. That final little something that most builders look for was the matt black and gold striping on the tank and the fairing. I think this did a lot to complete the look. As we say in Sweden, it was ‘the dot on the i’ that really brought it all together.” “I’m happy to say that the bike is now for sale if any of your readers are in the market. And if you will allow me, for those of you who are interested in a café racer bike that’s a little out of the ordinary, feel free to contact me and I’ll be more than happy to help you build your dream bike.” Somehow, we think that if anyone was going to deliver on that promise, it would be Adam.