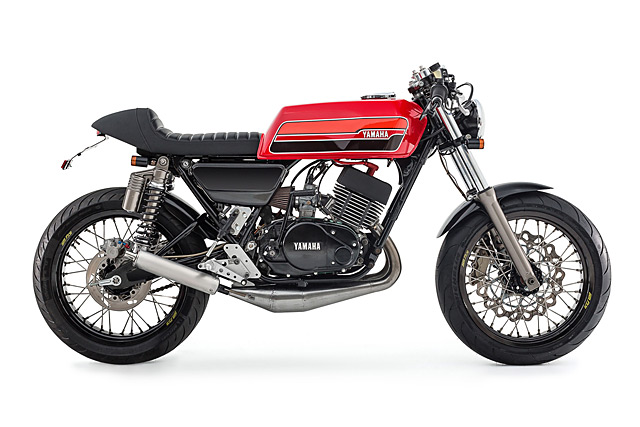 Motorcyclists have a place in their heart forever enamoured with the first bike they loved. It could be an oily Chinese pit bike, a reliable Japanese commuter or a ratty chook* chaser used for chores around a back paddock. But that first bike, no matter how unreliable, common or dangerous, that bike stays with you. For Sheldon, it was the gloriously volatile RD400. Riding around on the back of his fathers’ RD in the late 70’s gave him an itch that could only be scratched years later with a little help from Brisbane-based workshop Ellaspede. Sheldon had fond memories of the RD400, having spent a good part of his childhood clinging on to one for dear life. Being ferried to Boy Scout meetings each week on the back of the peaky RD often left him white-knuckled “My dad thought doing wheelies at every opportunity was the thing to do” he remembers. And not much coaxing was required to point the front wheel skyward. “No effort was required with these little crackers – and helped, of course, with the well-positioned child ballast. Thanks Dad.” Some thirty years later Sheldon found himself living the dream, working in a motorcycle shop during the week and spending weekends blasting around a racetrack. Even with the pick of the latest and greatest off the showroom floor he wanted something a little different, and a trip to a wrecker in Wooloongabba revealed a RD400 that reminded him of his childhood. It was in poor condition, but with a price tag of only $250 the decision to buy was easy. “That old pile of rust just had to be mine”. That was ten years ago. The bike was bought and put aside, but after ploughing through some twenty-odd projects Sheldon had started to pay more attention to the RD400. He’d been slowly putting together a mean little café racer, fitting a new exhaust, 17” motard wheels, Brembo brakes and braced TT500 swingarm. The rest of the bike was a mongrel too, with forks and triple clamps taken from a Suzuki GS400 Bandit and rear shocks from a Kawasaki ZR550. And while the work done was admirable, the crucial, final touches were left to Ellaspede who relished the chance to get their hands dirty and get the Yamaha howling again. Sheldon had already begun work on the frame, but Ellaspede finished it off with a healthy run of de-tabbing and some fabrication of a new frame brace to suit an aftermarket seat. A box was fitted to house a smaller battery, while the harness was tidied, trimmed and run short under the tank, with only the necessary wires extending forward to the rebuilt switch gear, new 5 ¾” headlight and Acewell 2853 gauge. While Ellaspede mounted their own licence plate holder and indicator brackets they also continued the mongrel theme, with aftermarket R1 rear sets modified to fit and a VFR750 mudguard slotting over the front wheel. To bring the whole bike together, strategic parts like the clamps and rear shocks were removed and painted in a subtle bronze before being re-mounted. New paint was also laid on the side covers, swing arm and hugger guard, with a healthy amount of powder coating completed to refresh the rest of the bike. Ellaspede and Sheldon have worked together to make a bike that defies the mantra ‘old bikes are better remembered than relived’. This RD400 is sleek, beautiful and much more ready for its manic power band than it was years ago. And, undoubtedly, so is Sheldon.