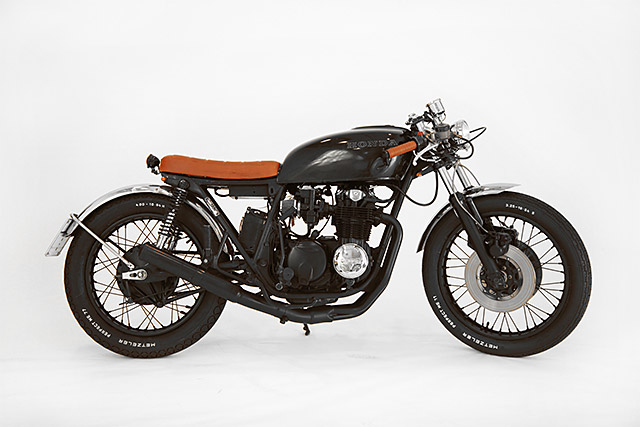 It’s sad to say, but we hear a lot of bike build stories and not all of them end with a smiling owner riding off into the sunset with a quality build between their legs. For Italy’s Giuseppe Pizzuto, his dream to own a classic Honda started well, and then took a sudden left turn into Nightmaresville. His solution to the problem was simple; he rebuilt the bike from the ground up. And this time he did it all by himself. Meet the Japanese phoenix called “La Bambina”. “Hello, my name is Giuseppe Pizzuto and this is my bike, ‘La Bambina’.  She’s a Honda CB500 four from 1977. She has a particularly interesting story. Some time ago, I entrusted her to a well-known brand of Italian customisers that I know. Aesthetically, they did a very nice job and the bike was published on many major blogs and magazines.” “Unfortunately, she was just beautiful on the pictures. The work done in real life was really bad. She was literally crumbling away. And later on I found out that I was not the only one. You can probably imagine my state of mind. I was down but I was not knocked out, which is why I decided to turn my house into a garage and work on her myself.” “From there I began to discover little by little, day after day, my real passion for customization. I did almost everything myself. The saddle, from the base to the padding, except for the stitching was all me. I also attached a stop at the base of the saddle. I created the belt that holds the battery and spent days painting many pieces of the engine.” “I spent more than a few days creating a system for attaching the fender to the swingarm. I handmade the Honda logo for the tank written in silver on black. I created a grid fixed around the brake fluid reservoir. You get my drift. The important thing, however, is that I did everything myself with my hands, in my own house!” “In the end, the misfortune I had was a very fortunate one. I had a great result and also got the satisfaction of having done it only with my own hands. My little girl is back and I’m happier than ever! I don’t mean to sound selfish, but in a way this is a little bit of revenge for me, and a very big dose of satisfaction. I hope you enjoy it.”