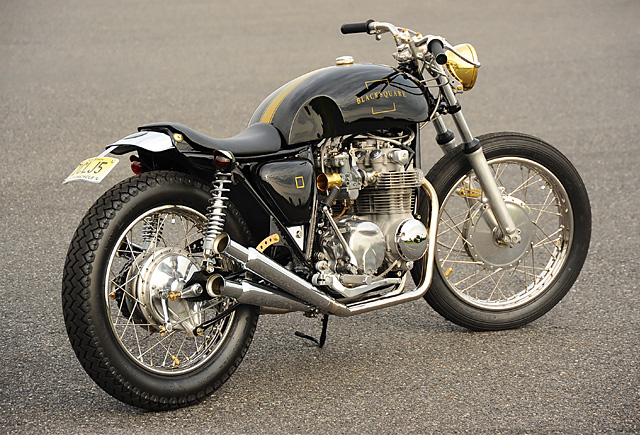 Great Britain and the United States of America have a proud history of building on each other’s innovations to move the whole of Western Civilisation along. While English minds may have created the industrial revolution, it took Henry Ford to crystallise the whole thing in mass production for the people. And while (arguably) it was Elvis who recorded the first Rock ‘n’ Roll song, it was clearly The Beatles and the Stones who perfected it ten years later. Then along comes New Jersey’s Kyril Dambuleff and his associates, who have managed to create ‘BLACKSQUARE’ – one of the most beautiful, and one of the most British-looking bikes we’ve seen in a month of high tea Sundays. Philip Vincent, eat your jolly heart out. The BLACKSQUARE was based on a 1977 Honda CB550, and as Kyril puts it, “it was built with the objective to optimize form and function and to maximize the power to weight ratio.” In other words, their mission was to create a custom motorcycle that was elegant, simple, light and fun to ride. “The solution was a minimalist approach and to make sure we really paid attention to the details. Everything that is not essential for the machine to run has been eliminated.” [superquote]“There are no instruments. No mirrors. No front fender. No switches. No blinkers. No conveniences. No luxuries.”[/superquote]

“A headlight, tail lights and a license plate holder are all present and functional since they are required by law. The motorcycle is street legal.” Only the frame, engine, front forks, rear wheel hub, and side covers were retained from the ‘77 original. All the other components were either custom-made or custom-fitted, and that’s probably why it looks so damn good. Aluminum, brass and stainless steel were used for all new parts, including the foot pegs, clutch and brake pedals, seat pan, brackets, velocity stacks, exhaust pipes, wheels and spokes, along with many other parts forged during nights hunched over a cold, metal lathe somewhere in Jersey. As a result, bike’s weight was reduced to a total of  170kg/375lb, down from the factory wet weight of 192kg/423lb.

Add a rider to the scales and you’re getting close to the magic 1cc-per-pound benchmark. That’s as good as a late-model 911 Carrera 4 and unlike the Porsche, riding this bike around town won’t make you look like your local bank manager undergoing a mid-life crisis; it’ll just make you look cool. Kyril wears his gasoline-pumping heart on his sleeve when it comes to his influences. “This project was inspired by the works of talented custom motorcycle builders such as The Grave Crew, Falcon Motorcycles, Raccia Motorcycles, and many others. And it would have been impossible to complete without the help of many mechanics, machinists, welders, painters and other craftsmen.”

“Building a custom motorcycle is a hell of a lot of fun, but it is a long process, too. It took me more than 2 years to finish.” In an attempt to help out some of his fellow aficionados and builders, Kyril took the time to note down some of the build’s finer details. “The engine is the original ‘77 HONDA CB550 unit, completely rebuilt with all-Japanese OEM parts. The carbs were treated similarly, but with the addition of a custom brass shaft for the main stay and brass velocity stacks by Steel Dragon Performance.” “The tank is a BCR ‘Dolphin’ model. The rubber is by Avon and spokes are by the Devon Rim Company. Rear shocks are Hagon units, and the exhaust is a custom-made stainless set-up with Emgo tulip-shaped mufflers. The tail lights are refinished antique units with new Lucan glass lenses, and the battery is a Ballistic Evo-2 unit.”