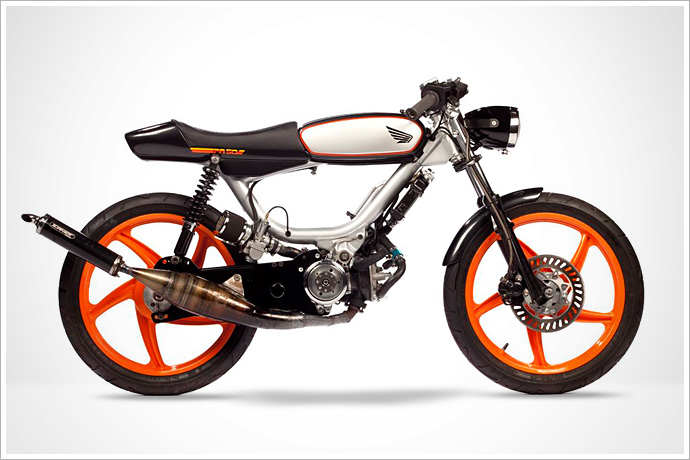 To build a custom bike is, in many ways, and exercise in knowing where to draw the line. It starts with small decisions, like whether that replacement carb you need is going to be new or reconditioned. Then it’s the off-the-shelf seat versus the bespoke leather one. Soon you add up all the ‘little extras’ you’ve decided on and realise that if you continue down this particular road you’ll be riding the world’s most expensive two-wheeled vehicle; a two-wheeled vehicle that you’d be lucky to be able to sell for half the money you spent on it. But what if you didn’t stop? What if you had the time, money and patience to keep going? This is what. Meet what is quite possible the world’s most loved-up moped, Matt Turner’s Honda PA50. “This bike started in early 2011,” says Matt. “It was born from a desire to build something that would still qualify as a moped, but that would address all the issues I had experienced with these funny little two-stroke monsters over the years of building, tinkering and riding. I’ve had full-size bikes as well, and appreciate a lot of things about them that mopeds simply can’t match, but really feel like nothing quite compares to the fun of zipping around on something the size of a BMX bike that is capable of speeds nobody has any business going on thin, substandard tires and terrifying suspension.” “That said, the things I always ran up against with the mopeds I built before were overheating, poor handling due to frame flex, uncomfortable ride due to weak forks and shocks, weak brakes, lightning, ignition, clutches and overall unreliability. I figured if I could basically put together the best components from a number of different bikes, I could make a moped that worked and rode like a small motorcycle. I’m also a fan of the top-tank bikes with full seat fairings like the Puch Magnum, so I wanted to make this bike look like the moped Honda would have built if they revived the PA50 series for 2013.” “The most difficult thing about putting it all together was that the Honda motor normally turns in the opposite direction than the Vespa transmission, so I had to do a ton of modifications to the ignition system to make the motor start and run backwards. Wrist pin offset was a big issue also since most pistons that fit had offset in the wrong direction. I finally found one that worked perfectly after a bunch of digging.” “Cosmetically, making everything fit together into a package that looked intentionally designed and thought out was really important to me. Fortunately, the top tube was already welded into this frame, so I just needed to build on top of it and make pieces to hide the structure. It all started with the tank, which I chose from a bunch of rusty options for scale and shape. I welded a spacer into the back end to make it sit level on the top tube and then went to work on the tail section.” “It’s made from 2-part expanding foam hard coated with multiple layers of fiberglass mat and shaped with ultraglass and body filler. After getting the overall shape I was looking for, I cut the tail section into three pieces so that it could be installed and removed like a production part, then made a fiberglass mold of the seat section so that I could cast it from softer expanding foam. The taillight lens was designed and cut with our in-house laser cutter and then molded into the back end with more ultraglass and body filler. Just like everything else on the bike, I tried to think about pieces being able to be removed for service, so the lens is removable as well.” Amazingly, this very same bike was given away not 24 hours ago at the 1977 Mopeds Garage Launch Show in Kalamazoo, Michigan. Matt must be crying into his two-stroke-scented handkerchief as we speak. Cheer up, bud. Cheer up, and get back in the workshop. There’s a good boy…