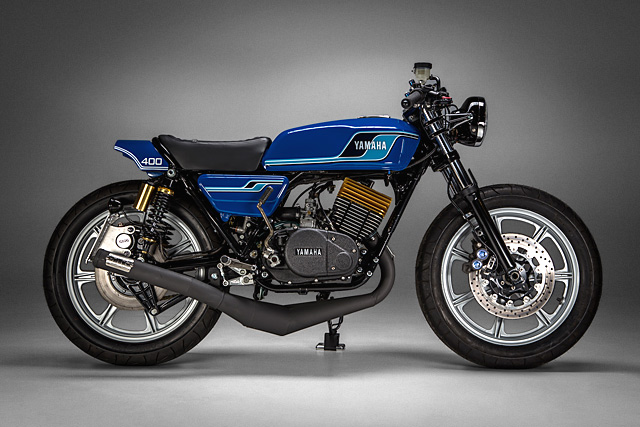 The Seventies might have seen the introduction of the four-stroke Japanese superbikes but for a young lad looking to emulate his race day heroes it was a decade built on two-stroke smoke. The Kawasaki’s had brutal power and beautiful lines, the Suzuki’s offered a level of durability not known to most smokers but it was Yamaha’s RD range that offered the most charisma. Forget your heated grips, traction control and smooth fuel injection when you jump aboard an RD400 and get it up to speed it’s a white knuckle, eyes on stalks experience and that’s before you’ve even pinned the throttle. So when Sean Skinner of MotoRelic in Hamilton, Virginia, was approached by a friend to do a custom rebuild on his 1977 Yamaha RD400 he jumped at the opportunity. The end result is a screaming Yammy that looks better than any factory offering and delivers all of that two-stroke insanity in one hell of a beautiful package. When Sean took on the job he hadn’t actually seen the RD in question, “If I had seen it in person before agreeing, I might have had second thoughts.” But never one to back down from a challenge and knowing the potential that lurks under the skin of the RD400 it was straight up on the lift for a full diagnosis. Take a look at any MotoRelic build and you can tell Sean is a planner; his bikes are comprehensively overhauled with no missed spots or last-minute half measures. So with the bike on the table and a clipboard in hand, a few minutes of poking and prodding let Sean know this patient was close to death, with a very long list of ailments. Not to worry as an order to two-stroke specialists in Nebraska, HVC cycles, had boxes of new goodies on the way and surgery could commence immediately. Then it was a matter of pulling the bike apart piece by piece to see where any structural damage might lay and boxing up the remaining good bits for later. Like most two-stroke builds this one commences with the engine, rarely do you pull one apart that is in perfect running order and there would be no corners cut on the way to Yamaha nirvana. The 398cc, air-cooled, parallel twin has been given all the fruit and it starts with giving the cylinders a fresh hone. Then the short block was built up with all new bearings throughout before giving the rods a new set of pistons and rings to swing in anger. Those stunning DG replica heads from SCR didn’t come till later in the build after bike owner Rick was subjected to an adequate amount of peer pressure to get him to open his wallet for the big spend. But they are worth every cent, not only do they look incredible they deliver the performance to match having been developed to win at the Isle of Man and break land speed records. To finish out the short block new seals and gaskets have been used throughout and an all new clutch fitted in anticipation of the extra ponies coming on board. Many of which come courtesy of the brilliant DG expansion chambers in the classic Yamaha design. So good are these pipes that the original 40hp figure gets a bump of up to 13hp more with many of those stallions coming earlier on in the rev range for a less peaky motor and all with a nice 10lb weight saving. To get the induction side up to spec a Y-pipe draws air through a K&N filter that gives an all mighty roar when the throttle is cracked. While feeding the beast the oily mix the standard Mikuni carbs have been re-jetted and tuned to match the other modifications. It’s all been finished off with a fresh coat of paint and “that killer wrinkle powdercoat done by Daniel at Appalachian Paint and Powder.” With a belter of an engine ready to go Sean had to work out exactly how he’d approach the rest of the build to do it justice and handle the extra power. “I was torn on what to do with the “look” of the frame. Rick wanted to keep the bike looking mostly stock and have a small tapered tail section.” He found the solution in shortening the frame and adding the up-kicked hoop that doubles as a seat stop and as a mounting point for the tail section. The tail-piece itself is all Sean’s work and while it utilises some of the classic RD400 lines, the curves over straight lines offer a stylish modern interpretation. It also acts as a functional rear fender and the underside is contoured to match the lines of the rear tyre. “Hand fabricating the seat pan and tail to match was a challenge due to the fact that the battery and oil tank are in the stock location.” With the body work off, the entire frame, swingarm and triple trees having been given a coat of gloss black so as not to take attention away from the mouth-watering body work and engine. “As always, I leave the paint work on the tins to Craig at Homeward Bound Motorcycle.” From his small shop Craig does some incredible work with some of the most striking paint jobs on traditional American bobbers, but he hit every mark with the RD with a double blue combination that is set off with white and black graphics. Under direct sunlight the darker of the blue shades appears to morph into the lighter colour that gives the logos an almost 3D effect that just cannot be captured even with the camera technology of 2016. With such an incredible paint job understated black was chosen for the seat’s leather, “Counter Balance Cycles did a fantastic job covering the seat. I’m sure it was not fun working around my design.” While the RD400 was known for its fast steering and quality brakes in 1977 nearly four decades have passed and Sean wanted to bring the bike into the modern era without taking away from its classic lines. Rather than follow the crowd and fit USD forks he instead found a solution to his dual needs “I opted for an early generation R6 style. It is wider and has larger tubes than stock but isn’t overpowering to the bike”. Before fitting up the late-model suspension the forks have been given a full rebuild to match the different weight of the RD and shaved of any unnecessary brackets and bolt holes. With Rick wanting to keep the standard wheels a solution to adapting them to the new forks and finding a brake combination to work was left in the hands of machinist Ryan Dzurilla. “He came out and measured up for spacers and an adapter to mount the FZR rotor. It worked like a dream and after sizing up some bearings it went together flawlessly!” The old ‘70s wheels get a set of modern Continental ContiPro tyres because cross ply don’t fly on an angry two-stroke like this!< To work with the new R6 front end and control the rear the twin shock setup remains with a pair of adjustable remote reservoir items tasked with the job. Speedmoto headlight brackets and a single Koso speedo clean up the front end remarkably well and with the new clip-ons only wearing the barest of necessities the all business theme of the build rules throughout. A powerful and lightweight Shorai battery sits in the stock location and to complete the build a set of HVCcycles brilliant rearsets do the business. Rolled out of the workshop door it’s hard to know whether Rick stood back to admire his new possession or jumped on and screamed off down the road but either way Sean’s got his mate covered with an incredible build. “That sound and smell brings back fun memories for anyone who has thrown a leg over a 2 stroke motorcycle as a kid” and those glorious years of the ’70s come flooding back.