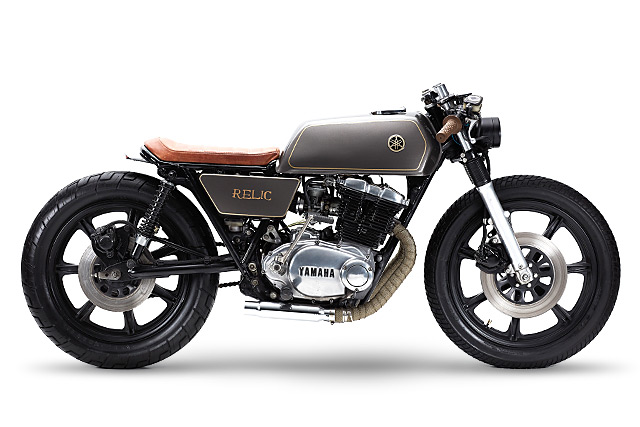 The Yamaha XS500 may not have anywhere near the street credentials of its big brother, the XS650, but if you ride a parallel twin less than 30 years old you owe a debt of gratitude to the younger sibling. It’s a potential Tommy Rand, Co-Founder of Relic Motorcycles from Aarhus, Denmark, saw when he found this particular 1977 Yamaha XS500 for sale in Copenhagen. He must have a great creative imagination, because the bike he came to see had been subjected to a terrible rebuild, strange yellow paint, no seat and it half resembled a hot dog stand. It’d also been on the market for over a year. Clearly, no other prospective buyers saw the possibility of a perfectly built Nordic Cafe Racer that Tommy and the boys envisioned and then brought to life. The reason that the XS500 is important in motorcycle history is Yamaha’s use of their contra-rotating balancer that allowed them to produce a parallel twin that was silky smooth and stilled made good power while being cheap to produce. It was a time of the 2-stroke decline, new multi-cylinder machines which all cost companies a lot to develop and the consumer paid. But the XS500 was cheaper to make, cheaper to buy, performed more than adequately and Yamaha used the money they’d saved to make the XS far better appointed than any of its competition. To sweeten up the little twin cam Relic have stripped the engine and given it a nice coat of paint and a thorough polish. Extracting some extra ponies are a set of K&N pod filters, heat wrapped and shortened pipes and finished out with a neat pair of chrome shorty mufflers. Where Relic Motorcycles have really excelled in this build is the look, the clever body work and the challenge that is dealing with the XS500’s rather square lines. Rather than fight them or simply fit another tank Relic have used clever colour selection and subtle paint work to bring out the best in the Yamaha design. The primary colour is Dakota Grey Metallic, a favourite of Audi designers, that is broken up with the finest of gold pinstriping. A brilliantly laid down gold Yamaha logo adorns the tank while the side covers feature matching paint work with the Relic logo finished in the same gold hue. At the rear the subframe has been relieved of much of its metal that originally supported a truly horrific two up seat and in its place an up-swept rear hoop has been welded in. Sitting on the new rear end is a custom seat with leather from a 1970’s Danish designer sofa and gives a period correct finish and an ultra comfy ride. To get the stance right and create that cafe racer feel the XS500 needs to get much closer to terra firma and Relic have achieved that by lowering the front forks through the trees, with gators and polished legs for a clean finish. The rear uses the factory mounting points top and bottom but tucks the tyre heavily thanks to height adjustable progressive rate shocks. The wheels have been powder coated in a tough matte black and are wrapped in Vee Rubber tyres. Now here is the clever bit, look at the bike from the rear and the centreline of the tyre is directly inline with the seats centre stitching that is then in line with the tanks pinstripping. It’s millimetre perfect and something that not only shows the level of thought and design in the build but is an incredibly difficult thing to achieve. To light the way a smaller than stock round headlight is one of the few modern features, with rear lighting coming from an LED tail light mounted under the heavily bobbed rear fender. Low mounted clip-on bars add to the tough low lines and are fitted with Chocolate Brown Biltwell grips that butt up to the refreshed factory switch blocks. A single chrome cupped speedo is all the instrumentation the build requires and the overall minimalism of the accessories let the stunning body work take centre stage. Tommy and his three best friends only established Relic Motorcycles just over a year ago, but with their design skills and ability to execute flawless work there is no doubt the orders will start pouring in and they just might have sparked a renewed interest in the little XS sibling!