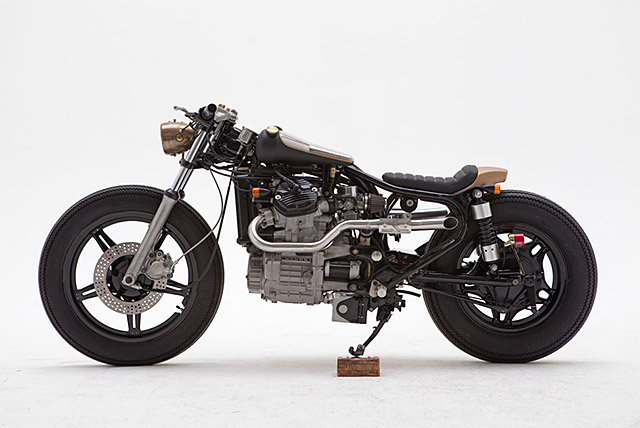 When it comes to designing a custom bike, everyone has their own way of working. Some like to sketch, others like to use Photoshop, and a brave few will just build from a picture in their head. When Pablo Luzzi from Buenos Aires recently started Utopian Customs he wanted to approach each build in a similar fashion as he does in his day job as an advertising art director. “I prepare a creative brief to serve as a guideline and start developing a concept in accordance to that.” says Pablo. “That’s how I initiated this first project, spending hours making thumbnails and messing with Photoshop until I came up with a comp of the final bike.” Once Pablo had created his perfect ‘comp’ of the finished design, he then had to find the right donor bike to suit the concept – which was made harder by living in Argentina. Pablo wanted an older bike but finding a decent donor in Argentina can be tricky because for many years spare parts were almost impossible to get due to import restrictions. So most of the older bikes are in bad condition or made using dodgy parts because when things went wrong with them it was hard to replace the parts. He eventually discovered a 1978 CX500, which he decided would be perfect for his first build. “It was a running bike with 50k miles and in good mechanical condition” he says. CX’s aren’t very common in Argentina so it was even rarer to find one in decent condition. Pablo’s original idea was to create something reminiscence of early salt racer bikes. “I’ve always liked the shape of the CX’s engine and we thought that replacing the huge original gas tank with these small stainless steels custom tanks would make the 500cc motor look more prominent and would also give us some of that racy look that we were after.” To help with the fabricating Pablo enlisted the help of Marcelo Giuliodori who is a stainless steel guru. “He started helping me with the exhaust pipes and ended up fabricating many other parts including the gas tanks. His ability and dedication to the project ended up making a huge difference.” Marcelo also made the foot pegs, the brake lever, the shifter and the housing for the temperature gauge. Another aspect that Pablo really focused on was the symmetry between the engine cylinders and the gas tanks, and he then extended that to the gauges and the exhaust. The beautiful old brass headlight was salvaged from a vintage car. “Old motorcycles and cars inspire us and we share a deep appreciation of early industrial design, where the results were as functional as they were aesthetic.” The beautiful seat unit was actually made out of sheet metal and painted in a bronze color with a satin finish by a local painter called Tanaka. The seat was then upholstered in black leather and matching bronze stitching by a car interior shop called Los Mellizos. With so many CX’s being built recently from all over the world, it’s great to see Pablo and his team have created a unique take on this model. The build has so many lovely details but the standout has to be those twin gas tanks. If this is Utopian Customs first build, then we can’t wait to see what they come up with next.

You can also check out the ‘making of gallery’ here.