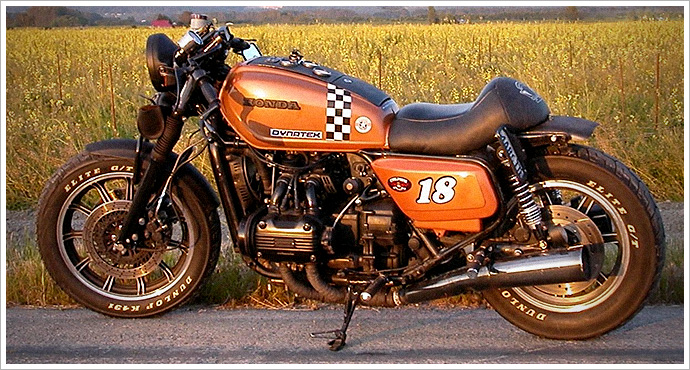 It’s funny how some types of bikes just get under your skin. And I know I speak for both Scott and myself when I say that Honda Goldwings are definitely one of them. Along with the CX500s, Goldwings seem to be dripping with that inexplicable coolness that gives any custom build a killer cool factor even before the first spanner has even touched the WD-40 drenched rusty bolt. But what exactly is it? I’m not really sure – but Jah knows the flat four, solid silhouette and chunky build don’t hurt. And the in-tank beer storage compartment? Japanese genius. I can see Honda-san sinking a few tinnies with the designers after hours and giving them a well earnt slap on the back in between burn-outs and practical jokes involving no-pants-sushi-balancing races. Richard “Sunnbobb” Matrass is similarly down with this whole Goldwing thing. Despite a bad first date, it was still love at first sight. And the marriage? Well just look at these shots and take a read of what Richard has to say… After the event, the farmer realised that racing for pink slips wasn’t such a good idea

“I live and work on Bradshaw Road near LaConner, WA; my builds are badged under the name Bradshaw Bikes.  While working on builds, Bradshaw also produces custom Vyper clutch and brake levers, and provides polishing services to the older Goldwing community.

My buddy Hamster and I took the ferry across the Sound to take a look at a 78 Honda Goldwing advertised for sale. “Yeah, it fires up and has a nice fairing on it, been sitting outside for a couple months” said the owner over the phone. When we got there, we didn’t know what to think. It was the Ugly Duckling. The Bates fairing was so ugly it gave the bike some kinda charm, even covered with pine needles and moss. Hamster commented it looked like a Viper fighter from Star Wars. There was something about it that had me digging in my wallet and forking over some coin. I rolled it into my shop, stripped it down to the frame, and cleaned everything up. I brought it back up and rode it around as a rat for a spell, while checking out some interesting builds over on the NGW CLUB site.  I came to really like the profile of the GL1100 “tanks” and some of the slammed café ideas they were playing with.” “The wheels in my head engaged in a burnout,
thinking about the GL1100 customs I had seen”

“I live in a valley with wide expanses of open paved rural roads.  Winding roads radiate in all directions out of the Valley. My machine had to tear up those rural straight-aways and be capable on the twistys. This was not going to be a long distance cruising machine, rather, a get to business rural fighter. At the time, my fabrication skills far outweighed my fabrication equipment, so this was going to be built with as many existing parts as possible. A guy drove nonstop from Nevada to buy that fairing from me. While he was in the shop he mentioned the idea of using some rims from an 83 GL. The wheels in my head engaged in a burnout, thinking about the GL1100 customs I had seen. I started playing with different rims, brake systems, even turning out some custom levers. Things began to fall together as an 81 shelter (tank) was fit, rear shocks explored, handlebars swapped around, and numerous other equipment options tried.” “Building replica handlebars with broomsticks and duct tape made the Clubmans an obvious choice. Not too low, not too high, the right angle to allow wind to lift some pressure off my arms at speed. Progressive springs and an old-school fork brace were added up front. I added gaiters just ‘cause they looked cool with the fork brace. The front fender is from an 83 magna, and the rear is a trimmed off trailer fender purchased from a trailer supply company. I tracked down some old GM bronze block paint, shot the body, laid in the checker board and graphics, and hit it with about four coats of clear. The number is a tribute to my father, who used to race stock cars in the early fifties under the “18” plate.

A seat pan was cut from the old seat. It was sculpted with new foam, and a carbon fiber style cover was upholstered. Lighting for the rear end was converted to LED. A small LED was mounted on the tail end of the frame to light the tag. The dual piston calipers were modified off of an 82 GL. The vented rotors were taken off an 84, drilled and mounted.  Stainless lines replaced old spongy OEM brake lines. Braking became two fingered. A cast Lester rear rim was polished and added to complement the front 83GL cast rim.

The OEM mechanical systems were replaced with an electronic ignition and fuel pump. The stock coolant tank was removed and a custom tanked strapped to the front frame down tube. I strived to keep the build clean, shunning typical Goldwing adornment. Everything had to have a purpose, a necessity, to be on the bike. For the cockpit, I removed all the large OEM gauges. A mini speedo for a CB750 was fitted, and the instrument lights were swapped to a 74 Honda 450 handlebar clamp cluster. The stock gauges were moved and recessed into the shelter lid. Wanting big light, I added a Marchel headlight from an old Alpha Romeo. The thing sets roadside vegetation on fire. A Stebel air horn fit perfectly under the frame near the engine. Napoleon Mirrors were hung on the bars. The exhaust headers were wrapped and joined to an exhaust system from a VF1000.

The build took about 6 weeks after I finally got the design in my head. I often wonder if it wasn’t just a puzzle, lying on the shop floor, ready to be made into a picture of something I had never seen before. Oh, and Hamster still sulks about not having grabbed his wallet first… ” Richard tells us that he’s currently building a supercharged cafe/sportsbike and an “evil” bobber in his shop for some very lucky customers. If they manage to come up to scratch in the same way this little Goldie has, no doubt he’ll be sitting pretty on a backlog of build requests for a good few years. As always, the moment he finishes them, you’ll see ’em here.