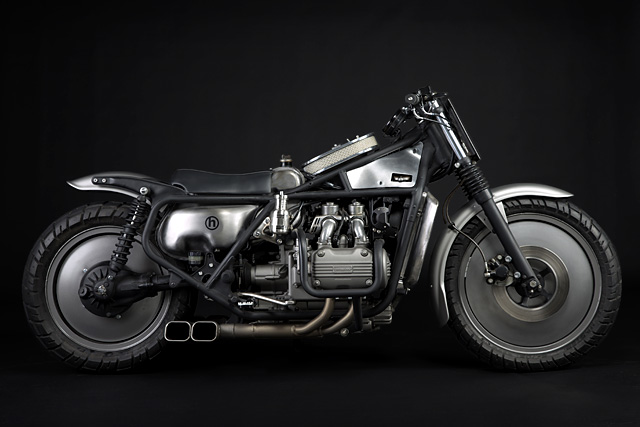 One of the best things about a gig at the House of Burnt Pipes is the fact that you really get to see builders grow and progress in their art. Often, we’ll feature one or two really good builds from someone who we’ll sadly never hear from again. But once in a while, we are lucky enough to get in on the ground floor with a builder who’s clearly headed places and then ride the elevator all the way to the top floor with them. This is one of those times. If there was such a thing as a Custom Bike Master Builder’s Association, this bike would mark Scott Halbleib’s entry submission. Meet his latest build, a.k.a. ‘No. 5’.

Chatting with Mr. Halbleib has become quite the norm for us over the years. Whether it’s gabbing about his new shop H Garage, helping to promote The Kentucy Kick Down, or simply shooting the poop, Scott’s one of those guys that you can tell is genuine a mile off. So when he got in touch recently regarding his latest build, we were more than little excited.

“The original temptation came from the near-purchase of a similar bike at the Mid-Ohio Vintage Swap Meet,” said Scott, as we excitedly pored over fresh shots of the bike. “Months later, a local enthusiast and resurrector of vintage bikes posted one for sale. It was a dusty old barn find that had been sitting for years. The bug to customize an old Goldwing was still there strong as ever, so the purchase was made.”

Scott said that once the new purchase was home, the size of the new luxo-barge metal monster sitting in his now cramped shop dictated its priority. Clearly, nothing else could be done while the ‘wing was owning the place. The original plan was to build a bagger of sorts, but as is usually the case, the post tear-down look of the bike kind of forced its own path. Scott’s new direction? A naked Goldwing with big serving of hot rod inspiration. Hell yes. “The bike was stripped down completely, the frame and engine were painted and reassembled. Then I took on the fabrication of the covers to create the look of a solid wheel. This was ultimately outsourced to the good folks at Mooneyes.” It’s hard to argue with 65 years of experience. Next up was the air-box. It was opened up and extensively modify to accommodate a large billet breather sourced from Holley. “I won’t lie. I chose it solely because its size and shape was ideal for the project.” The Honda’s stock fenders were used, with the rear being trimmed and rotated forward for a more sleek, aerodynamic look. Then came the drag bars, new controls and cables, some Motogadget switches and a GPS speedo unit from Speed Hut. The tail light is a flexible LED number which mounts under the rear fender and neatly incorporates turn signals. Paint was stripped from the gas tank (note that the gas tank on this generation of Goldwings is under the seat and the ‘tank’ itself was used for storage) and radiator guards, which were then heated and clear primed. “I fabricated the face plate and then it and the fenders were painted with a custom-mixed color and finished with a satin clear. The forks were rebuilt and new rear shocks from Progressive were installed. The old brake lines were replaced with steel-braided ones to slow it heft mass down a little quicker. The ‘pegs are from Knight Designs; originally they were made for the KTM Adventure, but I retrofitted them to the Honda with some minor modifications.” Scott then spent a decent chunk of time coming up with the design for the exhausts and the seat which, along with the filter, seem to skilfully define the bike’s overall look. For each side, twin rectangular tips were modified, sleeved and welded to the main pipes extending back from the headers. Not only do they look mean as all hell but if it rains unexpectedly, small dogs can take shelter in them. “The seatpan was fabricated from multiple pieces of sheet metal so it could comfortably wrap around the gas tank, which protrudes from the frame under the seat. The foam was purchased from Seat Concepts and was then shaved and sanded down to achieve the desired look – one which includes a recessed area that matches the radius of the gauge.” Final assembly focused on the alway painstaking process of sorting out the electrical spaghetti and tuning the bike’s carbs. With the help of Modern Metals all unnecessary Nippon wiring was removed, the ignition and charging components were all updated and the relays and switches for the amazing LED fog lights and tail light were finalised. “Tuning was not going to be an easy task, what with the missing airbox, large filter and wide-open exhaust; so it was outsourced to Chad Francis of RetroWrench. After much research, synching and needle drilling, it runs and sounds exceptional.” After really loving some of Scott’s previous builds, including a BMW K100 and a CB450 that both sit right at the top of our all-time greats list, we’re more than a little excited to say that No. 5 is alive. Here’s betting that No. 6 will be even better.