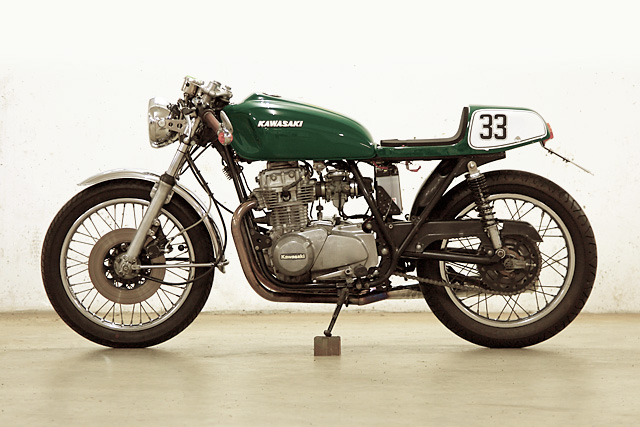 Barn finds are good and well, providing you actually have barns where you live. But as long as you have old geezers who love to horde, you’re going to find old bikes hidden away. Here in Australia we usually find them in sheds or garages. And clearly barns are the preferred storage method for the forgetful oldies in the US. But what about Germany? Apparently carpenter’s shops are all the rage over there. And if Jochen Guske and his find are anything to go by, the common inhabitants of the average Deutsche woodworkhaus are none other than the ‘Kawikus Kaffeus’ – also known as the Green-Breasted Kawasaki KZ400. “I’m Jochen from Dresden, Germany and I’m 35 years old,” say Herr Guske, the bike’s owner and builder. “I live with my wife and our two kids. Riding motorcycles had been a part of my live since I was 15 years old. Or should I say a big part of my life. Honestly, I’m obsessed. My current bikes are a 04’Kawasaki Z1000 for daily duties and now this, a ‘78 Kawasaki KZ400.” Then Jochen encountered his first café. “I saw one in a magazine. I was in love. This was the day I made the decision to build my own bike.” Like most of us, Jochen was fascinated by the style of the café racers and their ‘less is more’ attitude. “It’s so simple. There’s no unnecessary parts. Everything should have a function and nothing more.”

And just like that, he was hooked. But before he got started, he had a few things to consider. Priority one was to comply with those pesky German licensing laws. Priority two? “Stay in budget”. To achieve this, Jochen was after a bike built before 1983. “Then I found the donor bike in an old carpentry shop in Hamburg. Excitement turned to worry as I realised that it was well-worn and in pretty bad condition. The engine wouldn’t start and the wiring was an absolute nightmare.”

“After I brought it home, I was thinking that I needed to find a proper garage and some expensive tools to start the project. But as so often happens, I just started to strip down the bike myself.” Jochen replaced the suspension, built a new wiring harness, added new lights and some clip-on ‘bars. Then came a new seat, metalwork on the tank and thousand other things as well.

“The only thing I didn’t tackle myself was the paint job, which I took to a local pro. I decided to paint it in a traditional ‘British Racing Green’. When you think about it, the color fits perfectly because it’s both a Kawasaki and a café racer.” Then, after applying a little too much enthusiasm through his twisty right wrist, Jochen  changed the engine after the old one mysteriously went kaput. Now the bike has all its go supplied from a donk sourced out of an ‘83 KZ440. “It’s great for daily riding or old-timer hill climbing.” Hill climbing, he says. On a bike like this! Jealous much?

Three years later and here we are. “Sure it cost a lot of money and hours, but it really doesn’t matter. To build this bike was a real kind of ‘zen’ for me. It’s meditation – the best type of calm imaginable.” “The hardest part of the build was sourcing the spare parts for this model. Thanks to eBay, I bought many different parts from Sweden, England and Canada. Another big challenge was to redo the wiring, because I had absolutely no experience with auto electrics. In the end I destroyed a few regulators, blew countless bulbs and killed a few batteries, too. But I finally made it.” Jochen’s final step was to name his creation. “After I finished, I decided to give it a name. I settled on ‘ACE400’ as a hat tip to the Ace Café in London.” Makes us wonder if there aren’t already some plans afoot to make the pilgrimage across das kanal and pay a little visit. Gute reise, Herr Guske. Gute reise!