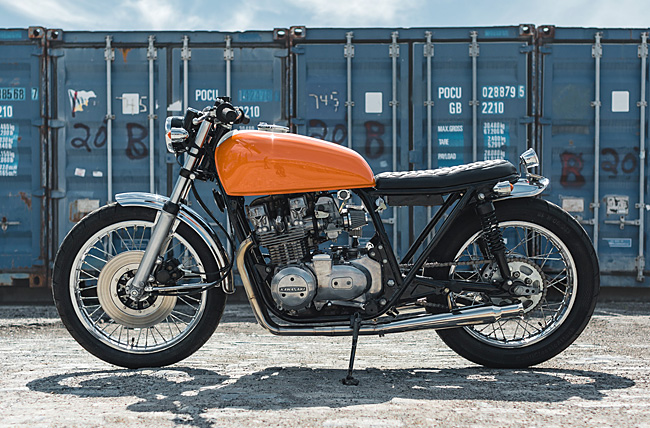 With the corporate dollars rolling in, the celebrities coming on board and a global fascination with the custom motorcycle culture there has never been a better time to be a bike builder. But for any movement to survive, its indigenous roots must be well fed with a continuous supply of what sprouted that seed in the first place; and nothing serves that purpose like a classic motorcycle, with a timeless appeal, that’s built to a high standard and designed with a purpose. The Harley based chopper scene is dead for not watering those seeds but at Montreal’s Clockwork Motorcycles they make no such error, giving their customers machines that will stand the test of time and be just as good in ten years as they are today. Their latest offering is a perfect example, a 1978 Kawasaki KZ650 that does everything a motorcycle should, just better in every way. Chief builder at Clockwork Motorcycles is Samuel Guertin, who previously spent ten years working as a helicopter mechanic which is both a testament to his skills and ability to deliver the ultimate reliability. I’ve never had the pleasure of wrenching on a proper chopper but I don’t imagine errors are ever acceptable and one loose bolt can literally kill the crew. But custom bikes lets Samuel also add his creative side to the process of delivery machines that run better than the day they left the factory and look a million bucks without breaking the bank. “The customer came to me with his new (to him) bike which was fairly clean and good running. But he had some other ideas for it. He wanted a classic, resto-mod look, with a hot-rod twist. He already had the colour in mind: a 1970 Boss Mustang orange. I’m usually not into shiny bright colours, and to be honest, I was not sure if this one was going to make it, but I accepted the challenge.” But look at any Clockwork build and you realise how seriously Samuel takes the fundamentals, the colours are often understated but the workmanship is always first class. So to bring the Kawasaki up to his standard the good running bike had to be taken back to a bare frame so he could build it up with the sort of attention to details that pulses through the veins of an aviation mechanic. The ’78 model came with an all new frame renowned for its handling characteristics “The Z650 was considered the ‘Son of Z1’ having been designed by the Grand Master himself, Ben ‘Mr Z1’ Inamura” which finally gave the agility to back up Kawasaki’s brilliant range of engines. But Clockwork can make even the best better and the frames been shortened and lightened by removing any excess, particularly from the rear end to leave a clean and solid finish. The subframe has been cut back, no longer needing to swing the huge rear fender and tail light that was all the rage in the period, with a fresh coat of paint covering the new metal. The stock Kawasaki tanks of the time were absolutely stunning, the lines of the Z series still hold up well today and are evident by the extraordinary prices the Z1’s command at auction. So having crafted a completely minimalist frame the tank becomes the one area of the build that goes tastefully over the top. The Boss orange laid down on the tank only broken up by a cream-white centre stripe with grey accents that prevent the bold colour choice from totally overpowering the rest of the build. “For the orange to look to have its place on the bike, we decided to keep some chrome touches, which is also something I rarely do on my projects! But we went all in with the 70s hot-rod style.” Which Samuel has executed flawlessly with the retention of the front fender in chrome, albeit heavily cut back at the leading edge. While the rear is a shadow of its former self, providing just enough surface area to balance the chrome at the front. While many such builds see a seat grabbed from eBay and slapped on that’s neither how Samuel operates nor true to the Hot Rod culture. Instead the lines of the frame are perfectly hugged by the new pew, not a gap in sight, and butting up perfectly against the tank. The black leather wrapped with diamond stitching by Ginger of New Church Moto also features neat bevelled edges to provide a slimmer profile and escape the often bread loaf shape of a quickly thrown together example. Rather than being legally necessary requirements the lighting is works into the theme of the build with a few clever tricks you might miss on first inspection. In the headlight housing sits a speedo that is definitely not a Kawasaki part nor a modern aftermarket alternative “It came from an older Honda mini bike, and it’s looking pretty cool to me, and fitting the theme very well.” The same can be said for the tail light and turn signals front and rear by Posh, quality aftermarket components, with old school lenses, that add to the theme and offer up just enough chrome without going to excess. But with the looks taken care of the functionality of a classic build is equally important and although the Kwaka was a good handler in the 70’s Clockwork has ensured it’s now up to 21st century standards. The triple trees have been refurbished and given a coat of frame matching paint and now swing a set of properly lowered standard forks, with the lower legs given the supermodel treatment, shaved and polished. The rear units are genuine Kawasaki items painted all black and control the needle roller bearing swingarm that was an update to the ’78 model. Nothing would have worked in the wheel department other than classic spoked rims and the 19 inch front and 18 inch rear have had the rims chromed before being re-laced with quality chrome spokes and then wrapped up tight with some modern Continental Classic Attack tyres to make the most of this corner gobbling middleweight. When the bike came to Samuel the engine was in good working order but you don’t escape the clutches of a helicopter mechanic without a thorough inspection, full physical and up to date maintenance schedule. The bare block, heads and covers of the 652cc donk have been given a comprehensive clean and polish, with the clutch and timing covers offering up a mirror finish. With 64hp at 8500rpm the Z650 was a true early middleweight screamer and to elicit the best of that sound an all new exhaust has been fabricated from the heads back in stainless steel. It’s a “2-2 style, topped with two stainless cocktail shaker style mufflers, to keep it 70s hot-rod style!” The bank of four Mikuni carbs now wear chrome pod filters and with their addition and the new exhaust have been re-jetted to ensure silky smooth operation and easy starting. While all the wiring and electrical components have been hidden in a neatly fabricated box under the seat for a clean and minimalist look. Although it’s built as an old school classic, that electrical system does get a few modern touches that integrate flawlessly in the way of Motogadget switches that sit on the flat drag bars with grips from the ever popular Biltwell. One of Motogadget’s m-Units simplifies much of the controls and is fed its power by a lightweight lithium battery. The Hot Rod style paint and chrome might be a change of direction for Clockwork Motorcycles but done with style the result is a motorcycle that will more than stand the test of time in all departments. “This KZ is so much fun to ride! They say that a stock KZ650 is nimble, have the weight of a 500 with the power of a 750.” And given Samuel’s shaved off more than a few kilos and extracted some extra punch that statement only becomes truer as its owner cracks the throttle on his Hot Rod Kawasaki and rides off into the sunset with a colour palette to match.