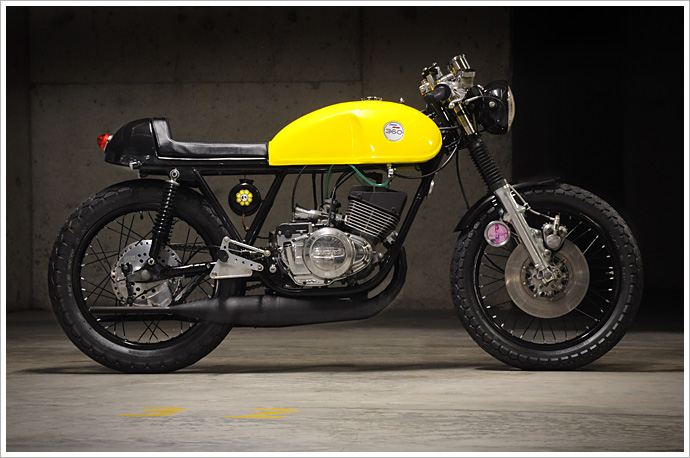 Gandhi was a patient man. His commitment to non-violence saw him wait almost 50 years for freedom only to die less than 6 months after India was finally granted independence from British rule. Buddha is said to have once meditated under a bodhi tree for 49 straight days until he claimed to have attained enlightenment. And the Bible’s Job refused to give up even after his family and life was taken away from him. Then there’s the story of one David Ottesen, a man who’s patience makes Job look like Russell Crowe. See dear readers, I promised good David a post on Pipeburn very soon after I shot the beautiful bike you see before you last Christmas. And I promised, and I promised… Soon, summer became Autumn, and the leaves fell from the trees, but did I do anything? Oh no, still I procrastinated and never made good on my empty words. But David never gave up. He persisted until the sheer weight of guilt began to crush me like a millstone. Then, and only then he told me that he planned to sell the bike. And the guilt became too much to bare. David, I’m truly sorry; anyone wanna buy a bike? Finally, here’s Dave. “I don’t know how many times, when looking at the bikes in Pipeburn, I’ve thought to myself “gees I’d love to have a go at building something like that”. Well, it just so happens about a year ago I was at a mate’s place and he had a 1978 Suzuki GT 250 sitting under a tarp. The bike had only done low kilometres and was in good original condition.  He said he’d never get around to restoring it and agreed to let me take it off his hands.” “Here was my opportunity to build my first custom bike. It took me a year of “working” (or should I say “a year of fun”) building this bike. This is a brief rundown on the build. I stripped the bike down in one afternoon. I had the frame in front of me, a 4 inch grinder in one hand and a beer in the other (great combination, alcohol and grinders!!) I then proceeded to remove all the unnecessary bits – centre stand, battery brackets, steering lock and anything else that would reduce the weight of the bike. The next day I put all the weight back on by bracing the frame.” Made in Italy. And Japan. And Picton

“I stripped the wheels painted the rims and spokes, polished the hubs and then rebuilt them. All paint work is with rattle can, bar the tank which I left as is. The motor had great compression so I just changed the gearbox oil. I know a lot of people say the seals go hard with age but it runs fine and when running it is not burning any of the gearbox oil. The tank is Benelli Mojave NOS, the seat base is from Prixhistoric fibreglass from Philip Island, the gauges, stacks and brake linkage I acquired from Dime City Cycles USA. The oil tank is a fuel tank from an early Australian Victor lawn mower, the tail light from an Austin Healey Sprite. The rear sets I made from 10mm aluminium plate, using the original rear foot pegs.” “I sold all bits left over from the build on EBay to a guy from Canberra. When he came to pick them up, we got to talking and it turned out that he had drawings for expansion chambers for an X6 road racer (late 60s 250 Suzuki Hustler.) He later emailed these drawings to me. So, with half a sheet of .9mm cold rolled sheet steel and heaps and heaps (!) of cutting, rolling and welding, I had a set of chambers!” The Benelli tank. Is there anything it can’t do?

“The big day came to start it up. A mate from down the road was there along with my wife and son, they all stood watching as I fired it up, it started! (after swapping spark plug leads to the correct plugs) I’m thinking, boy that’s a little loud, I look up and my mate is grinning and nodding with approval my son blocking his ears and my wife yelling ‘is that legal?’” Dave’s misses where the tax disc used to be. On my bike, I have a picture of your mother…“I have built this bike for me, it’s my interpretation of a café racer, yeah I know it looks a lot like other café racers and I know I will get done for noise eventually but that’s what I believe café racers are all about, looking, sounding and sometimes smelling a little different from everything else.”

As mentioned, in the 6 months since Dave wrote those words, he’s decided to sell the bike to fund his next project. How could you get your stinky little hands on such a sweet build, I hear you ask? It’s easy, just click here for the eBay auction that could change your biking life. And remember, auctions require patience – just don’t wait half a year to make a bid. Ahem.