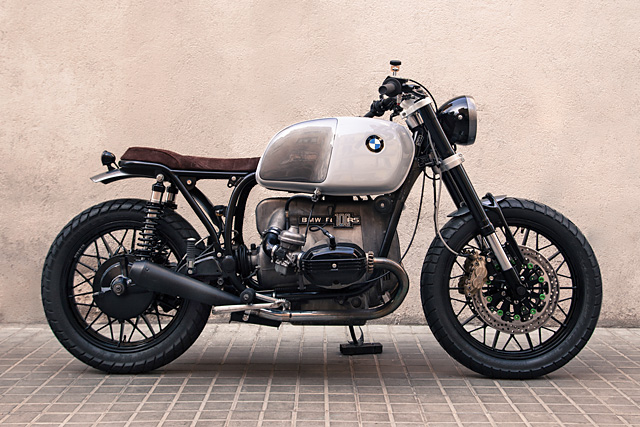 Inspiration is a fickle thing. Fickle, and sometimes a little bit crazy. Take the case of this BMW R100RS from the late Seventies. It was made in a very different shape to what you see here but now, almost forty years later, it’s been reborn in a new form. A form that’s been inspired by the same company’s brand new RnineT. Which itself was inspired by bikes like this. Confused? Well don’t be, because if the end result is a ride like this you’ve just got to trust that whatever the path was to get here, it must have been the right one. “We are a shop based in Barcelona,” says Victor. “We’ve been working for more than a year as The Bike Lab, but we have many years experience with other Spanish shops. Our ethos is simple; we care about the details and we always look for the perfect balance between aesthetics and functionality.” The brief for the bike itself was simple. “We wanted to make an old bike handle like a new one, while maintaining that classic look.” Victor says that in your average Barcelonian street, you can see plenty of stock boxer BMWs, some customised ones and lots of brand new RnineTs. “We wanted to take the best of each of these genres and build a bike that any of these owners would love to have.” “We made the custom sub-frame from scratch, along with a suede leather seat, new fenders, handlebars and footrests. We’ve changed almost everything except the tank and the engine.” There’s also a new electrical system with a Motogadget speedo, some simplified handlebar switches and a hidden ignition on the upper yoke. All the lights were replaced, with extra special attention given to the headlight – replete with a custom-made bracket – giving it the illusion of being suspended rather than bolted on. The bike’s front forks comes from a Ducati Multistrada 1000, which were then polished and painted black. The brakes are gold series Brembo units from an Aprilia Mille, with custom-made aluminium disks with a competition master up top. Rear shocks are custom-made Hagons that slightly raise the BMW’s back to keep the overall line nice and horizontal. “With almost every part being new, we decided to reinforce the classic look with the paint job. We painted pretty much every component with the lots of black and two really classic greys. The only relief is the yellow of the lamp and the brown of the seat.” Liking to leave something unique in every custom they build, The boys went to town on the front fender. It’s completely handmade and features a single side mount made from aluminium. “It’s the part that really pops and it distinguishes this BMW from all the rest.” It’s clear that this build has marked lots of new things in the shop’s evolution;  there’s new people, a new workshop and a new website. It also marks the beginning of the next stage in the company, and if this Bee Em is anything to go by, it’s going to be one hell of a stage.