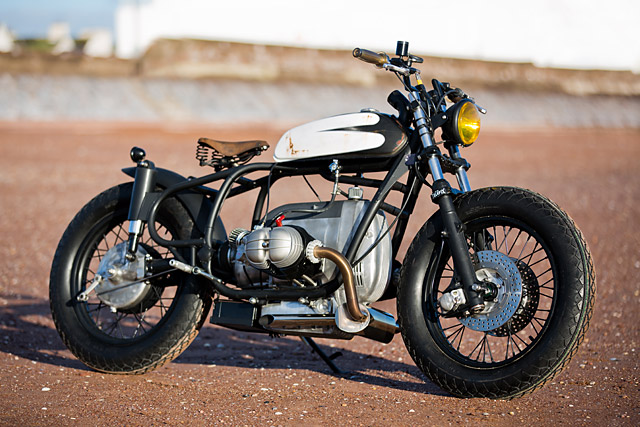 If you ever found yourself in England and in desperate need of a cleansing ale, get yourself a Fullers. And if you wanted transport to get to the pub, try a Jaguar. Then say, perhaps, you find yourself low on petrol while en route, a British Petroleum service station is ideal. But should you have a moment of clarity while refilling and decide you need a decent custom bike between your legs, then a Kevil’s creation will be your best bet. You see, if there’s one shop that’s as British as bulldogs and bad weather, it’s a Kevil’s Speed Shop creation. And here’s their latest victory; an R80/7 named ‘Artisan’. Just don’t mention the German thing… “Kevil’s Speed Shop is based in Devon in the south-west of England,” says Kev Hill, Kevil’s owner and chief wrencher. “We have been building custom BMW motorcycles for around 5 years now and we have about 20 completed bikes. I like to think that we are probably the world’s biggest custom BMW bike business.”

“Belstaff recently purchased my own personal BMW cafe racer as a gift for David Beckham after they used it for their ad campaign.” I hate it when that happens. “So I decided to build myself a completely new out-of-the-box, badass concept bike for 2014 based on a 1979 BMW R80/7.

The donor bike was purchased from a guy that left a voicemail message on my phone while we were in Ibiza last summer. It went something like this – “I know of a BMW for sale. Are you interested? If so, call me back. I’m in Devon.” Fate? We’d like to think so. “Following a few comments from internet trolls about our bikes being ‘all the same’ I decided to create something completely different. Why not throw all we had at this build , which in our case meant all the spares we had kept from previous bikes. And for the critic out there, our signature style Cafe Racers are all completely different.  The devil is in the details, my friends.” “So the bike was reduced to a pile of parts in a day and then ‘processed’. It’s basically sorting out the good the bad and the ugly. We keep the good, bin the bad and sell the ugly… and let me tell you, there was lots of bad and ugly with this bike.

The frame was completely de-lugged before being handed over to our very capable, semi-tamed fabricator. Ideas were thrown around, sketches were made and even a scale model of a early BMW R69 was purchased to explain my vision for this build. The challenge was to build a radical, urban, grungy industrial sled taking inspiration from BMWs of yesteryear. And all with a Kevils Custom Twist.” “The wheels were sent off for rebuilding and a sliding top triple tree was fitted to drop the front end. With these chunky Coker Diamonds we didn’t want a chopper stance – more of a long, low and heavy one.

“The tank is from an old Yamaha from the early eighties that we had lying around the shop. With some work we made it fit and our logo, the rust and patina is all expertly custom airbrushed thanks to Killerpaints.” “A vintage Brooke’s leather cycle seat’s proportions worked well and married up well behind the slim long tank. The exhaust system is a stroke of genius in itself, I do say so myself. I wanted the silencer box to run across the frame. It’s simple, minimal and loud.” “Finally, all the hardware was powder coated black, then wet sprayed with a special oven bake matting agent to obtain that industrial, almost gritty charcoal finish. The old engine and transmission have been completely rebuilt and upgraded with 1000cc R100RS barrels pistons, big valve heads and new Mikuni carbs. It pushes it down the road nicely. All new electrics, hidden wiring and a new Boyer Branson ignition and charging system is also fitted for reliability.”