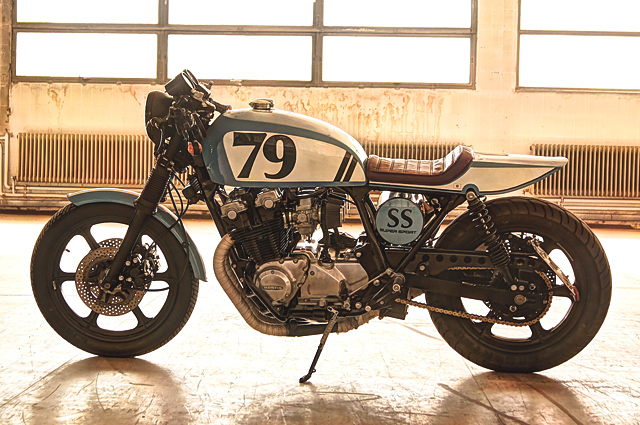 As someone who swims neck-deep in bikes every day, it’s all too easy to think that nothing great ever happens in the custom scene unless the people involved are in a similar state of bike-a-holic dependence. If you don’t wake up at 3am with an idea for a build burning a hole in your cerebrum, you just aren’t trying hard enough. But here’s proof that you can lead a bike-free life for many years and yet somehow pull a custom bike together that’s, well, that’s like this. Here’s Andreas Goldemann’s first bike in 10 years, and it’s a doozy.

In October 2013, after a 10 year motorcycling hiatus, Germany’s Andreas realised he wanted to own and customise another bike. After much research into style, power and type of bike, he settled on a Honda Bol d’Or from 1979 as the donor bike for the new build. “It has a beautiful engine, a nice large frame and its seat, when done right, would be low enough and comfortable enough for my size. A picture was building up in my mind – thankfully I left it open enough to give the process some space to show me where the build should go.” He then sourced a Suzuki GS 850 tank, which was widened and altered to fit the frame. The fender was built from scratch out of sheet metal and a friend in the car repair game was kind enough to donate some leather for the upholstery. For the under-seat space, Andreas first fabbed up an angular box-arrangement, but quickly realised that it didn’t sit well with the more curvaceous look of the tank and fender. Realising that a round shape would sit nicely in the space, he build a storage canister with two domed, bayonet caps just large enough to hold some tools, a lock and a wallet. “Every bearing, o-ring, shaft seal and gasket was replaced with quality parts to make sure they last. The original air filters were replaced with racing ones, which then took me 2 days to tune the carburetors for. I think I opened them up at least 20 times – honing the jets, riding for a while and then checking the spark plugs for the right residue to show. Finally I was sure that a long ride wouldn’t kill my engine or burn a hole in one of my pistons.” Thinking beyond the aesthetics of pipe wrap, Andreas taped up the exhaust manifold to speed up the gas flow. By all reports, the improvement in the bike’s low range power is clear and noticeable. Then the brake calipers where reconditioned to as-new condition and the brake lines were changed to braided, stainless steel units. “I decided on some old Magni wheels that seemed to fit the idea of the build much better than the wire spokes I’d been considering. The swing arm is a special piece with tapered roller bearings designed to make the bike a little more stable. I then fitted some fully restored Koni shock absorbers. Up front, the forks got some new progressive springs and a freshen-up as well. Then the tacho and speedo got a handmade housing and newly designed face plates. After this I got onto the details, creating some new brackets and fittings for the exhaust, lights and many more little things.”

“My initial idea for a colour scheme was to finish it as a sheet metal bike in black and grey with racing numbers, but my brother insisted that we were too old for a ratty look and suggested we try some colours. I agreed and decided on a pastel blue and creme white with black racing numbers. I am extremely happy with the choice, as I seem to get as many positive comments from the girls as I do from the guys. All up, about 400 hours went into the finished project. I hope enjoy it.”