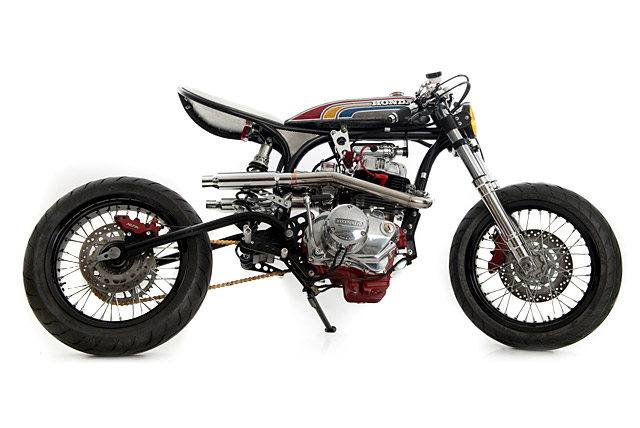 As guys who see a lot of bikes, there’s nothing more intriguing than a build that seems to be hard to pigeonhole. Now that’s not to say that a classic café racer doesn’t whet our whistles, but there’s something about a mix of styles or fresh ideas that make you look twice. Needless to say, the bike you see here a.k.a. the latest build from France’s amusingly named Ed Turner Motorcycles just so happens to be one of them. Built by and for ‘Head Ed’ Karl Renoult, it’s a Honda that looks like the result of a one night stand between a café racer and a supermoto in a 1970s amusement park. And in our books, that can only be a good thing. Karl’s ethos is simple. He tells us that the one thing he aims for when creating a bike is to come up with something that’s uncompromising; something that won’t leave anyone indifferent or bored. “It’s with this concept in mind that I design my bikes. I also make sure that each motorcycle contains a decent serving of good ol’ 70s & 80s Americana; I always take a lot of inspiration from the auto culture of this period.” Like many other builders, Karl takes a lot from the look of the engines, often allowing their form to dictate the rest of the build. “From the moment the first frame tubes are bent and positioned around the engine, the machine itself starts to take part in the decisions and lets me know what is expected. You can’t force these things. There is no ‘one size fits all’ approach. The bike knows what is good for her.” The project began with Karl wanting a bike for himself. Something that not only pushed all his own buttons, but that would also serve as the best possible calling card for the business. And the choice of a total rebuild was an easy one to make, as Karl mentions that the donor bike was “a total slaughter. It really had been made a martyr to the custom gods.”

Alignment turned out to be the hardest part of the build, as this was Karl’s first bespoke frame and swing arm build. But he got there in the end and once everything was pointing in the same direction, he equipped the bike with a polished CBR fork and 17” supermoto wheels. Then the engine was mounted and the whole thing was crowned by part of an old floor polisher as a means of covering the coil. Wiring was then redone to ensure it was hidden from sight. Karl also took on the task of painting the bike. Not one to hand over the reigns when the going gets tough, he managed to apply all the paint including the metallic sparkles with his own hand, only stopping when he realised that the powder coated frame would need the help of an electrostatic discharge gun or two and some damn big ovens.

The bike was finished with some Dunlop Sportmax shoes, an old car headlight, Nissin stoppers, a modified tank, velocity stacks on Edelbrock carbs and some stainless pipes. The first test ride proved interesting, too. “The sensation on the bike is somewhere between a café racer and a supermotard. Surprisingly, the little engine is really quite nasty, as it’s breathing freely.” If you like what you see, be sure and check out Karl’s two other genre-defying builds at the Ed Turner Motorcycles website here.